Listen to this companion podcast on SiriusXM POTUS 124

It's full speed ahead as delegates and junkies alike settle in for two weeks of pure political theatre, some rehearsed, some improv. It won't go like our simulation in March, but here are a few educated guesses on plays that could be run at the Republican National Convention in Cleveland. 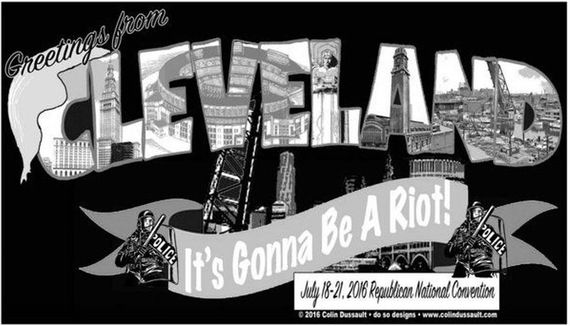 THE PROVOCATEUR Donald Trump will provoke by way of three now-signature strategies: Peacocks with sure-fire odd-ball speakers. Think Chuck Norris taking out an email server. Call outs on his haters. Where's Jeb? Where's Mitt? They're such sore losers! Where's Turncoat Jeff Flake? And baits to lure careless rebuttals from Bernie-inspired protesters. When's the last time they showered? They're sleeping in tents! It's disgusting!

THE DODGER By way of the pass, Hillary will ignore a virtual barrage of servergate attacks, spending her energy on her own vilifications of The Donald, and perhaps his newly-minted VP. She'll use her top surrogates (i.e., her auditioning VP candidates) and paid media to pepper us with quips of Trump's fitness and storylines that predict doom in the event of his election. Watch also for Team Hillary to bend the Black & Blue movement toward Philadelphia and away from Cleveland. She might even let Bernie have his megaphone back, giving him a stump to stand on in Cleveland-area camp grounds.

THE DEFECTORS Fathers of the GOP will pass, too, at least officially, but run plays at arms-lengths both to soften their tough love of Trump and prevent their own political Siberias. This means that the Bushes, Romneys and other Never Trumpers will embellish anything from Trump that resembles moderation. Donald's coming around. He's starting to understand what real Republicans are about. This might even include the likes of defector columnists George Will and Michael Gerson.

THE BOY SCOUT House Speaker Paul Ryan will spend his days framing his pet legislative agenda and re-framing his rationale for suffering Donald Trump. By way of recasts and screens, he'll push his latest line: Donald Trump and I don't agree on everything. That's democracy. But that we agree on most things means that we want to win in November; never Hillary.

THE FOMENTERS As though this won't be enough, look for a ratings-crazy news media to bait every available hook and lure every available detractor. Protesters, running the freezing play we call a jam, will have preferred on-camera exposure to guarantee the friction that Cleveland is supposed to serve up. They'll stop just short of inciting riots, by Trump loyalists or disaffected delegates, they could care less. In so doing, they'll get the desired coverage of a convention marked more by mayhem than managed party politics.

Who needs Netflix? What's coming in Cleveland will be a binge-worthy drama and realtime lessons in the discipline of influence and strategy.