This Saturday Manchester United legend Denis Law is going to Bahrain to promote the 2013 Manchester United Soccer School (MUSS). Law's appearance comes just one week before the Formula One race will take place in Bahrain. "The visit is set to happen during a significant time in Bahrain's sporting calendar and is aimed at further strengthening Bahrain's profile as a major host of sporting activities by raising its international profile," says the event's sponsor, telecom operator VIVA.

While Law is there promoting the school, it might be nice if he went to see the family of Ahmad Shams, the 15-year-old boy who was shot by the police, according to his family, while wearing a Man United shirt in March 2011, or popped in to see Dr. Fatima Haji, one of the medics in Bahrain who was tortured and interrogated about her connection to Man United.

Ahmed Shams was playing soccer with his friends near his home in Sar on March 30 2011, his family told me, when he was killed by security forces. Around 5:30 p.m. in a quiet area, two groups of security vehicles appeared, nine in all. When the boys playing saw them, they ran, and the police started shooting rubber bullets at them. They say Ahmed was hit by a "sound bomb" cartridge on the back of his head. He continued running, but was caught and beaten by the police. His father took him to a relative's house and then to the American Mission hospital. While being examined by a doctor, his family says security troops came and took him to the main Salmaniya Hospital, where he died, still wearing a Manchester United shirt. A commission of inquiry into what happened during the crackdown on protestors ordered by the Bahrain government found that "No autopsy was conducted and no formal cause of death has been recorded," and that "The MoI [Ministry of the Interior] has failed to conduct an effective investigation into the circumstances surrounding this death." It was hard for me to look at the Man United posters on Ahmed's bedroom wall when I visited his house a few weeks after he died. I am also a Man United fan, and have been since May 1968 when I was five and watched George Best on the TV take it round the Benfica keeper in the European Cup Final. I had pictures of Best and Denis Law on my bedroom wall. Ahmed had Rooney and the rest of the team on his. In the days after his death, some people in Bahrain wrote to Man United asking if they might hold a minute's silence before one of their games in tribute to Ahmed. An ambitious ask, but people sent emails to the Man United account making the request. One of them was Dr. Fatima Haji, a rheumatologist in Bahrain's Salmaniya Medical Complex, and a Ryan Giggs fan. Along with dozens of other medics she was arrested after treating injured protestors and tortured in custody. But her interrogation was a bit different; she had written the email asking for the minute's silence and then deleted it, knowing it might be incriminating. When she was arrested on April 17 her laptop was taken too, and a few days later -- with tragic efficiency -- Man United responded to her email, which her interrogators then saw.

I was blindfolded and handcuffed with my hands behind my back, and beaten. A man asked me 'What's is your relationship with Alex Ferguson?' I was shocked and figured out they'd gone through my emails. A female officer hit me on head on both sides at the same time -- she was wearing what I later found out was a special electrical band on her hands and she electrocuted me a couple of times -- I felt a shock wave through my head. It was very painful and the whole world was spinning. I was beaten again on the head.

Haji says she was questioned over and over again about her connection to Manchester United: "because they'd responded to my email the police thought I somehow knew someone at Manchester United." She spent several weeks in custody and was tried with 19 other medics in a military court. She was sentenced to five years in prison and then acquitted on appeal in June 2012. Three of her co-accused are still in prison. None of this was Man United's fault, but the club and Denis Law might want to know about what happened to Ahmed and Fatima, and say something about it. 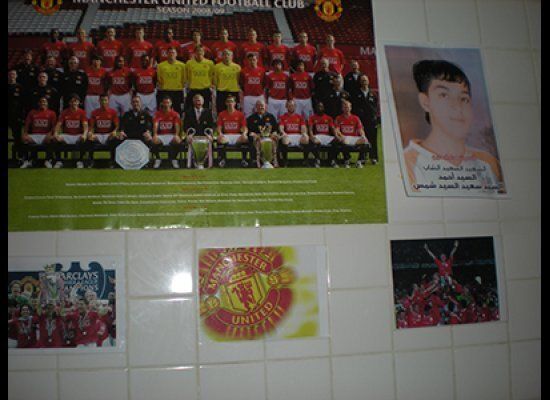