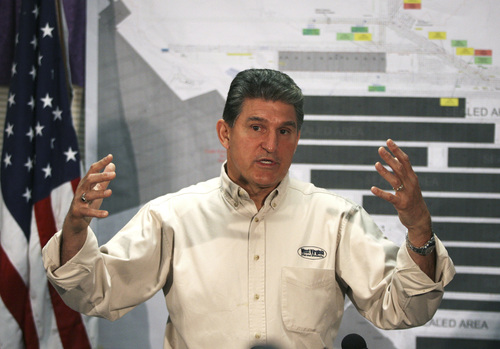 Senator Joe Manchin of West Virginia was none too pleased when a Democratic Senate colleague, North Dakota's Heidi Heitkamp, blocked his efforts to move a notch forward on gun control by expanding requirements for background checks.

But now the two of them are leading an effort in the Senate to put forward what Manchin calls a "sensible alternative" to the White House-drafted Syria resolution. Manchin and Heitkamp have argued that a punishing blow against Syria's Assad regime, which stands accused of deploying chemical weapons against its own citizens, could escalate in unexpected ways or could draw the U.S. directly into Syria's civil war. They argue that the nation deserves to know how this action fits into the strategic objectives of the United States -- and what the trade-offs are against other priorities.

The Manchin-Heitkamp resolution calls for two primary things. First, it gives the administration 45 days to secure from Syrian President Bashar al-Assad a commitment to join those nations who have signed and agreed to the Chemical Weapons Convention. If Assad fails to comply, then the Senate gives full authorization to the president to use whatever means possible to respond to the regime's apparent Aug. 21 use of chemical weapons.

In a fascinating and potentially consequential announcement today, Russian Foreign Minister Sergei Lavrov has said that his country will push Assad to relinquish all chemical weapons.

Secondly, the draft resolution calls for the White House in the next 45 days to fully articulate its Syria strategy to the Senate. Manchin and Heitkamp call for detail on how the end game in Syria's civil war does not hand over the nation to the Islamic extremist wing of the opposition and how the U.S. will respond to and deal with various escalation scenarios -- not just with Syria but also with its strategic partners, Russia, Iran, Hezbollah, and others. The resolution offers the White House a classified information channel, as well, to articulate these goals and scenarios.

Given that President Obama said that he could strike Syria in "a day, a week, a month," waiting 45 days to try and secure a major leap by Syria from being a holder and deployer of chemical weapons to one that joins the international community in opposition to them makes smart, strategic sense.

Furthermore, the element of surprise is gone in responding to Assad on his regime's use of chemical weapons. Attacking him would have made sense, even in a limited way, if designed to change his strategic calculus on working through some form of deal with elements of the Syrian opposition. Today, the delays are emboldening Assad. Waiting another 45 days won't degrade the situation further, but may allow an opportunity for some net positive to emerge.

The White House has refused to consider Manchin's proposal and has resisted considering alternatives, according to a source close to the administration's efforts to secure congressional support on Syria. But according to Senate sources, Manchin and Heitkamp's efforts are giving on-the-fence senators an alternative that they feel provides the possibility of success without mindlessly marching off to war.

Here is the draft resolution, titled the "Chemical Weapons Control and Accountability Resolution."

-- Steve Clemons is editor at large of The Atlantic where this post first appeared. Clemons also publishes The Washington Note and is founder of and senior fellow at the New America Foundation's American Strategy Program. (photo credit: Reuters)