In late February of 1990, just two weeks after being released from prison, Nelson Mandela met with Palestine Liberation Organization Chairman Yasir Arafat. Afterwards Mandela spoke publicly of his affinity with the Palestinian people and his support for their struggle. He described the parallels between the two peoples' struggles for justice, saying in part.

"There are many similarities between our struggle and that of the PLO. We live under a unique form of colonialism in South Africa, as well as in Israel..." 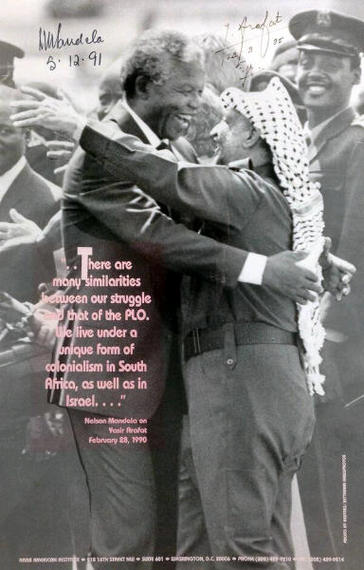 That was 1990, when it was taboo in the U.S. to have any contact with the PLO. Because Americans had a double standard when it came to addressing Palestinian rights and/or had been cowed into silence about Israeli behavior, many were shocked that Mandela would not only praise the PLO but would also compare the Palestinian struggle against colonization and occupation with the campaign against apartheid. But Mandela would not be silenced. The man stood firm reminding those who questioned him that the PLO had always been an ally of his African National Congress (ANC), while Israel had been an ally and arms' supplier to the South African apartheid regime. At one point he said "Our freedom is incomplete without the freedom of the Palestinians." For supporters of Palestinian rights, all of this was exhilarating and validating.

I was so moved by Mandela's courage and his commitment to speak the truth about Palestinians that I made a poster commemorating the Mandela-Arafat embrace including an excerpt of his words.

I met Nelson Mandela a few times. On one occasion, he told me how thankful he continued to be for the early support Algeria and Egypt had provided to the ANC and to him personally. On another, in 1991, I remembered to bring a copy of the poster and asked him to sign it. He looked at it, smiled and said about Arafat "he is a friend and a good man."

Four years later I remembered to bring the poster to Arafat asking him to sign it.

That poster has hung in my office for more than two decades as a reminder of the real Mandela -- the brave and always honest fighter for justice and of his strong support for the Palestinian people.