After almost two decades of democracy the world is asking: "what has Nelson Mandela's South Africa done with its freedom?" With the 95-year-old father of the nation ailing, the 52 million South Africans who see him almost universally as a hero are also asking what lies ahead long after "Madiba."

To contribute towards a balanced narrative, Goldman Sachs has constructed a data rich, empirical analysis of how South Africa has changed in the past 20 years, revealing what South Africa still needs to tackle.

When Nelson Mandela became president in 1994 he took over a state in crisis. South Africa had no foreign exchange reserves, double digit lending and inflation rates, a debt to GDP ratio of 50%, and 23% unemployment. Between 1980 and 1994 the economy grew at a real average rate of just 1.4%. Few believed that the previously-banned ANC had the ability to manage Africa's largest economy. Equally few people grasped just how bad the inheritance was. In April 1994, the South African economy literally had junk status.

South Africa confounded Apartheid apologists by enjoying a peace dividend from 1994-2007 with real GDP growth averaging 3.6% per annum, only slowing to 2.3% following the 2008 global financial crisis. By 2007 debt to GDP almost halved to 28%, and whilst now back at 42%, it still compares favorably to most developed markets. Post 1994, a "Golden Period," the economy grew 2.5 times in size from $136bn to just under $400bn today. Inflation plummeted from an average of 14% in the 14 years to 1994 to an average of around 6.4% thereafter under the guidance of the Reserve Bank's inflation targeting. South Africa now boasts a respectable $50bn of gross gold and foreign exchange reserves. The tax net also grew, from 1.7m taxpayers and $11bn in receipts in 1994, to 13.7m taxpayers and $81bn in receipts in 2012. Notwithstanding a recent one notch downgrade, South Africa's sovereign credit rating deservedly improved to investment grade today. 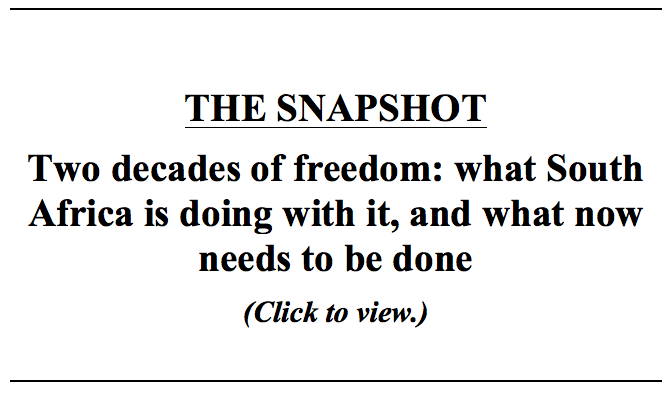 Responsible macro-economic stewardship has, generally, been accompanied by adherence to the rule of law, respect for the much admired South African Constitution, media freedom and strong independent institutions such as the Reserve Bank and judiciary.

Perhaps the most striking successes since 1994 have been the creation of a growing and sizable African middle class, increased real wages for the employed, and the extension of social welfare and services to underprivileged communities. In the decade since 2000, the African middle class more than doubled in size. Real GDP per capita increased by 40% over this period, as 10m South Africans, one out of five, graduated from lower to the middle and higher income bands.

Welfare has been extended to 16 million people who receive monthly cash grants at an annual cost to Government of $10bn. Disadvantaged households also receive far greater access to basic services such as sanitation, electricity and water. Collectively, these transfers provide a tangible "democracy dividend."

When economic isolation ended, trade patterns changed. While Europe remains its largest trading partner, China is rapidly catching up. The Johannesburg Stock Exchange (JSE) became the world's 15th largest bourse, with a total market capitalization twice that of local GDP, at around $800bn and representing 80% of all African equity capital market flows. The corporate valuation gap between the JSE and developed markets closed, setting the stage for South African companies to compete globally for assets. The deeply liquid JSE is now the ideal investment hub for Africa. 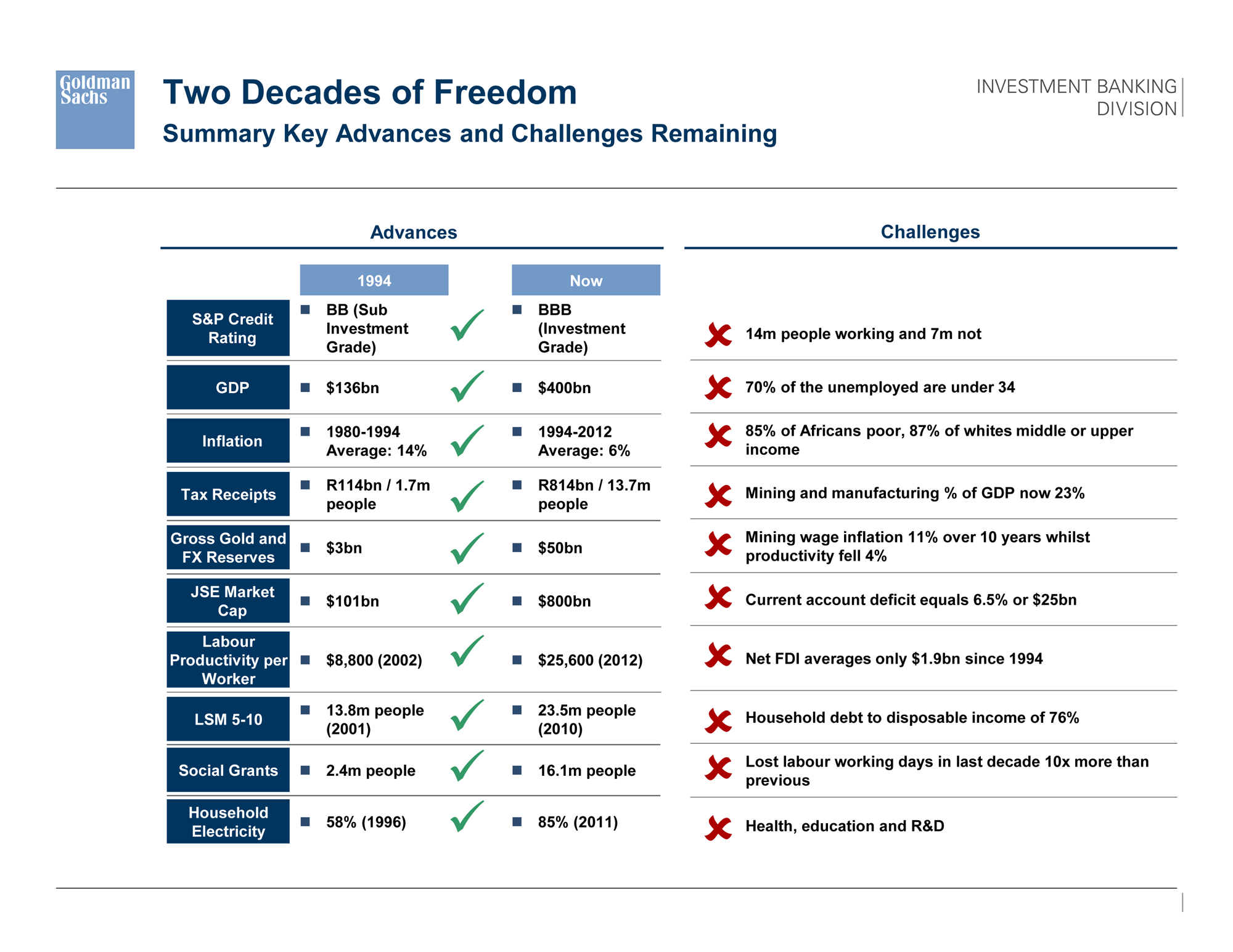 South Africa is one of the most unequal societies in the world. By 2008, 85% of Africans were still in the impoverished or lower income categories receiving less than R1,400 per month compared to 87% of whites in the middle and upper income categories. Unemployment too has barely moved from the 23% inherited in 1994 to a post-Apartheid average of 24.5%. With 70% of the unemployed under 34, the young are disproportionately affected.

Job and export creating mining and manufacturing almost halved their share of GDP to 23% since 1986, while banking and real estate doubled to 24%. At 6.5% of GDP the current account deficit, is the highest among growth market peers while foreign direct investment (FDI) has averaged only $1.9bn since 1994. The currency exchange rate acts as a "shock absorber."

With public service union membership rising, labor militancy is now as much an issue for government as it is for the private sector.

Productivity in the private sector has not kept pace with wage inflation, while the public sector, despite increasing to 2m employees, has seen its contribution to GDP fall from 19% in 1994 to 15% today. Despite increased budgets, health and education outputs lag emerging market peers on quality and effectiveness of spending when measuring life expectancy and quality of schooling. This is not sustainable. Productivity needs to outpace wage inflation.

Since 1994, indebtedness (household debt to disposable income) has soared from 57% to 76%. 9.5m South Africans have impaired credit records and as many as 10% may risk defaulting. This poses no systemic risk to the banking sector, but represents a potential source of instability.

What needs to be done? 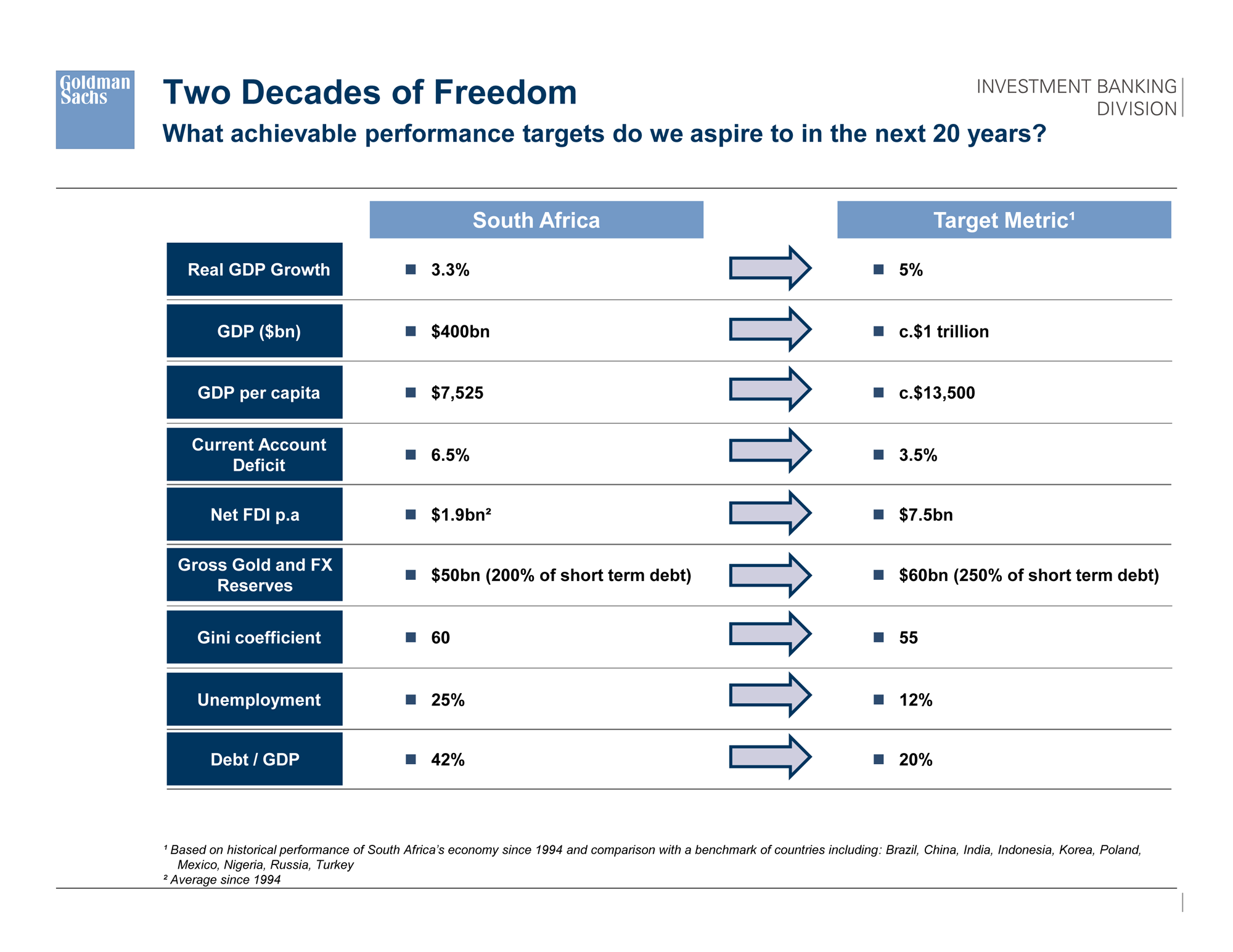 The government must reduce inequality, increase employment, especially amongst the youth and defend the gains made by the African middle class. It must improve public sector productivity, outputs and effectiveness.

With sub-Saharan Africa GDP growing at over 5.5%, South Africa now lives in a "good neighborhood." But the anticipated tapering of quantitative easing means the time of easy money is over. South Africa must act fast to raise its game. It must build on its trade and linkages with African and BRIC economies, stabilize and revive its job-creating mining and manufacturing sectors, drive technological innovation and research and development, and dramatically increase internet access, especially in schools.

In the next 20 years South Africa should aim to raise its GDP annual growth rate from the past 20 years' average of 3.3%, to 5% thereby growing the size of the economy to $1trn by around 2030. Such growth, if attained, would cut both the unemployment rate and debt/GDP % in half, and see GDP per capita double.

To stave off its budget, and particularly its current account deficits, we believe net FDI should increase to an average closer to $5-10bn per annum. This will require a more determined focus on improving the investment climate and creating a much more friendly regulatory, productivity and labor picture. To sustain fiscal expenditures, government must leverage state assets to "stretch" its resources.

Finger-pointing in this still divided society will not help. A "Team South Africa response" by business, labor, government and civil society will. South Africa has the people, the talent, the institutions and the capital to do what needs to be done.

Nelson Mandela's dream depends on it.