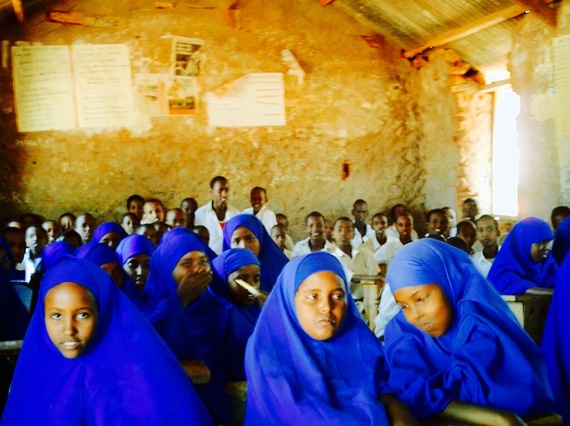 On December 2, Islamic militants attacked a quarry near Mandera town and executed 36 innocent workers, just days after the hijacking of a Nairobi-bound bus outside the town and the killing of 28 passengers.

As a result of the insecurity, public servants -- especially teachers and doctors, who suffered the brunt of the bus attack -- are leaving Mandera.

The Mandera Referral Hospital -- in one of the most dangerous places in the world for a woman to give birth -- is now facing severe staff shortages. The women's ward had to be shut down after nearly 40 nursing staff fled Mandera in fear for their lives.

Mandera has a maternal mortality rate (MMR) of 3,795 deaths per 100,000 live births, more than double that of neighboring Wajir, Kenya's second most dangerous place to give birth, with an MMR of 1,683.

This county needs doctors, teachers and other public servants more than any other. If more of these professionals leave Mandera, the people will suffer, especially women and girls.

Maternal mortality rates in Mandera are worse than that of war-torn Sierra Leone in 2005, with an MMR of 2,100 and Somalia, estimated at 1,200.

So why is the situation so bad in Mandera? Its remoteness combined with inequity and persistent instability are causes that are apparent.

But there are underlying causes too. The ordeal women and girls in Mandera face is appalling and unacceptable. For example:

A. Most are denied the right to an education. B. They are forced to undergo the worst form of female genital mutilation at a very young age. C. They are married off well before they attain the age of 18 and become mothers before their bodies are physically ready.

Is it any wonder then, that maternal-related disabilities and infant and maternal mortality rates in this county are alarmingly high? What can the United Nations Population Fund (UNFPA), and all development partners who provide health and education services to people in need, do to change this? Do we not have a humanitarian and moral imperative to scale up our efforts in Mandera?

We cannot abandon Mandera because of insecurity and logistical challenges.

Mandera County Governor Ali Roba is leading from the front to improve the situation for women and girls in Mandera. Over the last 18 months, the hospital has been refurbished from its formerly dilapidated state. It has emerged from the ashes into a very good hospital facility through the concerted efforts of the county authorities.

In August 2014, Governor Roba promised to reduce the maternal death rate in Mandera by signing a communiqué along with 14 other governors whose 15 counties together account for nearly 99 percent of maternal deaths in Kenya.

UNFPA helped bring together a diverse and committed group of humanitarian and development partners, as well as the private sector, to visit Mandera to discuss ways of improving the dire maternal health situation. These included the Kenya Red Cross Society, the World Bank, the technology company Phillips, the Aga Khan University and the African Medical and Research Foundation.

Despite early morning news coming in of the attack, the United Nations decided to press ahead with its mission to Mandera in an expression of solidarity and support for its people. Two courageous women led the mission: Ruth Kagia, a senior adviser to Kenya's president, and the United Nations Resident Coordinator for Kenya Nardos Bekele-Thomas.

"The government of Kenya is committed to safeguard and ensure the security of Mandera," Kagia said. "Humanitarian and development assistance must go hand in hand with security support."

While the incidents that happened in Mandera are heartbreaking, we must work to defeat terror through development, resolving inequity, ensuring basic services and human rights for all.

We must win this war, and it can only be done by intensifying efforts to guarantee security in the region; to escalate access to health care and education; to build and improve infrastructure in the county; and to protect the rights of all the individuals, especially women and girls, by eradicating the harmful practices and traditions that place them at risk of disability and death.