Have you seen a sunset? OK, great. New question: Have you trekked to the roof of the new Whitney Museum in downtown Manhattan? No? Well, then you lied earlier. You HAVEN'T seen a sunset. Because there's only one sunset in this town, and it costs $22 to stare at.

For those New Yorkers not living under literal rocks this summer, the reopening of the Whitney Museum of American Art, newly situated near the shores of the Hudson River, has been an occasion you're more than vaguely aware of. There have been Instragrams. And those Instagrams more likely than not feature a smattering of hyper-colored chairs seemingly dropped by the Hand of God onto the roof of the prestigious place. Pay the standard admission fee, and from these chairs you can see the aforementioned sunset. The expensive one. The one that "closes" on September 27.

The sunset has been provided for you by artist Mary Heilmann. Don't thank the universe. Do not thank, like, the clouds for parting and not getting in the way of your bleeding star. Thank Heilmann.

The sunset is practically everything on that roof but the actual setting sun. Because, alas, you can't see the sunset from Heilmann's site. There's a giant wall blocking our view of the west, which I'm told is the cardinal direction we should associate with setting suns. You might be able to catch "glimpses of the light over the Hudson River," but that's probably an oversell. Really, you've got sculptural chairs and Tetris pieces and parking lots.

I said smattering, earlier. About the chairs. I should have said "scattered." "Scattered on the terrace like a shower of confetti." That sounds better. They're scattered so that loads of people can deliberately congregate on the Whitney rooftop. "Let's meet on the Whitney roof," people could be saying. “Museums are places to hang out,” Heilmann definitely said. "As are New York rooftops," the Whitney whispers.

I should also note that the chairs sculptures "serve as elements in [Heilmann's] larger composition and encourage visitors to interact with one another and the cityscape beyond." Beyond, but not including a sun setting.

Heilmann was a New Yorker at one time. Her more famous work, the video "Swan Song," filmed in 1982, documents the destruction of the former West Side Highway. It's on view at the Whitney and you should absolutely watch it. But if you want to see a sunset, head to the indoor galleries and walk until you see water out the window. At around 8 p.m. this time of the year, a sun will set. It still costs $22.

PHOTO GALLERY
The Whitney
Download
Calling all HuffPost superfans!
Sign up for membership to become a founding member and help shape HuffPost's next chapter
Join HuffPost

Manhattan's Hottest Rooftop Has A Sunset With No Sun
The Whitney 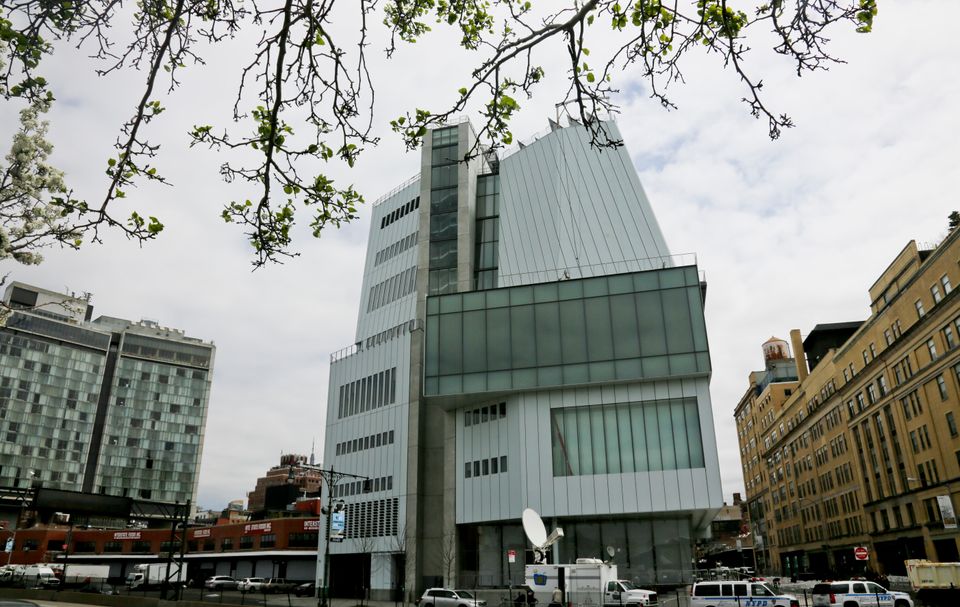