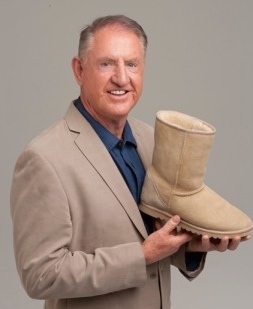 One thing I've realized is that who you are in business is who you are in life, and when you act with integrity, stay true to your ethics, and just treat everyone with simple respect, you'll be successful, but more importantly, you'll be happy. -- Brian Smith

It is said that in business, as in life, first impressions are key. What I have learned from Brian Smith, Australian born entrepreneur, keynote speaker, author and creator of the UGG brand is the fact that outer impressions pale in comparison to those first impressions of inner strength of character. If you are lucky enough to stand in his presence, an aura of positive energy, you just can't help but feel upbeat. He is like a walking antidepressant. Brian's ability to exist in an authentic place of "one with the universe" is intoxicating and contagious.

Brian will be the first to tell you that "everyone loves a good story." His ability to connect with audiences through story telling goes back to his Australian roots. As Brian will tell you, storytelling is the vehicle by which "wisdom has been passed down from one generation to the next since the beginning of spoken humanity." This man loves telling stories as much as he loves surfing and life in general. Luckily, he has taken this incredible gift, put pen to paper and is telling his story in his new book, The Birth of a Brand. As the title suggests, bringing a brand to life involves remarkably similar "paradigms and follows similar growth curves" as does bringing a child into this world. As the father of two amazing young ladies and the creator of the UGG brand, Brian is able to draw tangible correlations between building his brand and raising his daughters. The epic highs and lows parents face are eerily similar to those a business must endure in order to mature and succeed.

The first time I met Brian Smith was at a university where he was giving a talk on leadership. Afterwards, people waited in line to meet the man. I hung back until the end so I could inquire about his book. While listening to his conversations with the students, it was easy to see that he was just as excited as they were. As the line dwindled down, I finally got a chance to talk with Brian. When I asked what inspired him he pulled from his pocket a scrap of paper that he gingerly unfolded, and handed it over to me to read. It was a note from a woman thanking him for his encouraging message. Overwhelmed and disenchanted, she had been on the verge of giving up on her business. Hearing Brian's message helped her find an inner strength that gave her the courage to continue down the path to her dreams. He said, "See, this is why I do this." True to the form, my short conversation with Brian left a lasting impression. This man is a walking talking brand, and like any good product he provides an experience that you will not soon forget.

Along with his laid back and fun personality, Brian has an incredible work ethic. Creating the UGG brand was no easy task, but with amazing customer service, exceptional fortitude, out of the box thinking, and "a certain amount of insanity and love that will reach out beyond the doubting voice of reason and into a place where only you can understand the potential", Brian was able to produce a quality and identifiable brand that has proven to have longevity in the American market. True to his understanding of the power of the universe, Brian shares,

I am a firm believer that when you take those first baby steps, you don't have to know exactly where you are going to end up. If you do not take the first steps, then you will never come across the forks in the road that lead to new opportunities for growth.

Brian's life was and continues to be filled with moments when the final destination is a complete mystery, but the lure of the journey keeps him running towards his dream.

One of Brian's most effective tools in building his brand was his shear likability. He became a fixture in the surf shops along California's coastline. Brian was known for his interpersonal sales techniques. He believed in making every effort to have consistent face-to-face interactions with the retailers who sold his product. For more than a decade, Brian made his trips to each specialty shop that shelved the UGG brand. He became known as "the UGG guy" and to this day he wears that title with pride. It was amazing, but not surprising, to hear how willing Brian was, at every turn, to be in the sales trenches throughout the development of his business. There was never a time that Brian felt he was too important for the mundane day-to-day tasks. He was a hands-on father and a hands-on businessman. Brian rolled up his sleeves and got to work regardless of the annual sales numbers.

As with many fledgling products, Brian's sheepskin boots were initially met with skepticism. His task became proving, to the American consumer, the intrinsic value of this Australian staple in footwear. It was somewhat baffling to Brian, and other Australians, why Americans couldn't seem to appreciate the amazing aspects of sheepskin boots. Instead of expecting consumers and retailers to take his word for it, Brian introduced a sales technique that converted the most cynical customers. It involved stripping down and getting a little more personal with the boots, but Brian was able to talk people right out of their socks and into those boots.

In an almost zen-like approach, Brian handled the challenges of copy cats who attempted to compete with his product. He has a deep love and respect for his brand, and had done the work necessary to create a solid foundation to allow the UGG brand to mature organically. Instead of focusing money and negative energy on shutting down his competition, Brian adopted the mentality that he must "get out and run faster" than his competitors. By staying two steps ahead, Brian watched the majority of his competition fall apart. Brian reflected, "The greatest asset is your vision.You see what is possible but the imitators just see what you have done."

Many businesses fail because overhead exceeds income by insurmountable ratios. Brian battled the cost of running his business and the need for cash flow throughout the growth of his company. The UGG brand changed hands multiple times throughout the seventeen years Brian spent in the business. There were even times when Brian was forced out of decision making positions due to investor ownership, but he never gave up. He didn't hold onto animosity or give in to fear. Brian learned to stay tuned into his own spirituality, and allowed the universe to align itself. Eventually, each change in management brought Brian back to the helm. Brian has an ability to turn trials into teachable moments. Each lesson he has learned is shared in his book. He understands that every interaction will impact another's life in some way, and with that thought in mind he has created a book containing the keys to living a successful and fulfilling life. As Brian Smith says, "One thing I've realized is that who you are in business is who you are in life, and when you act with integrity, stay true to your ethics, and just treat everyone with simple respect, you'll be successful, but more importantly, you'll be happy." 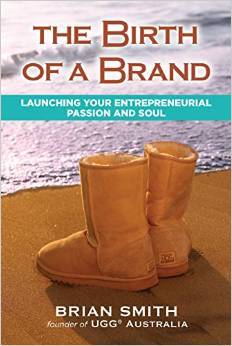 The Birth of The Brand is also available on Amazon.
Find more on Brian Smith at BrianSmithSpeaker.com

Article's Co-Author Amber Harris
Amber Harris received her undergraduate degree in communicative disorders at The University of Arizona. She attended Arizona State University to complete her M.Ed. in Autism. Amber is a speaker, teacher, and the author of the picture book series, Wisteria Jane Hummell. In her spare time Amber home schools all three of her rambunctious kiddos.