Striking and massive murals by international street artists have been populating the walls of Mexico City for the last five years thanks to the emergence of a global Street Art scene, a rise in mural festivals, and the country's tradition of institutional support for murals that further a socio-political mission. There hasn't been much of the latter lately, however, and it is doubtful that a new politically charged mural campaign underway in certain central neighborhoods is likely to receive tax dollars for the paint and ladders. 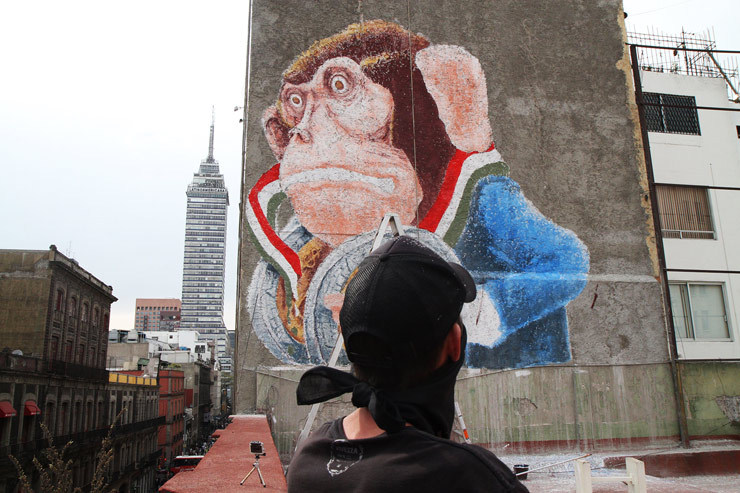 Without sighting a specific ill to address, the new mural initiative named "Manifesto" is challenging a select group of local and international street artists to express their opinions on weighty and topical matters through murals, "using art as a social tool to propose, reflect and inform." Among possible topics that might be addressed, the manifesto for "Manifesto" says, are increasing poverty, glorified materialism, the exhausting of natural resources, a fraying social web, and a dysfunctional justice system.

At the heart of the matter of course is the still turbulent national discussion surrounding the series of violent events last September that resulted in the disappearance of 43 students in the state of Guerrero, igniting a public spectacle of accusations, arrests, outrage and fear with each new gut-wrenching revelation searing the senses of Mexicans at all levels of society six months later. 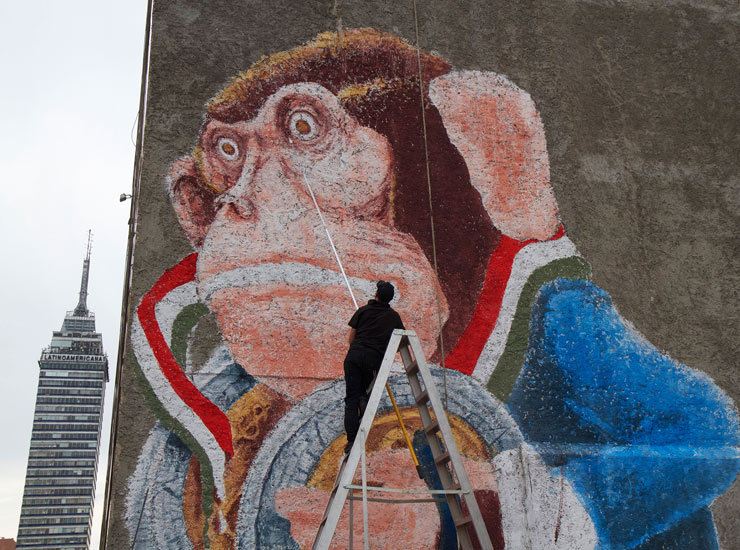 "This situation exposed a deep crisis in the power structures that has shaken opinions worldwide and has created a movement within our society where people are speaking out," says Emilio Ocampo from FIFTY24MX, a gallery that shows the work of the artists and is securing walls in neighborhoods of Roma, Juárez, San Miguel Chapultepec, Centro Histórico, and Peralvillo.

Based on the response to the mural by Italian street artist EricaIlcane, however, "Manifesto" may be running into resistance against certain modes of artistic speech, and censorship has suddenly appeared. The ribbon around the neck of a cymbal-banging monkey originally contained the colors of the Mexican flag but has now been painted black. The monkey was overlooking a street in a part of town central to political marches, and Ocampo says it "is always a very 'sensitive' part of the city." 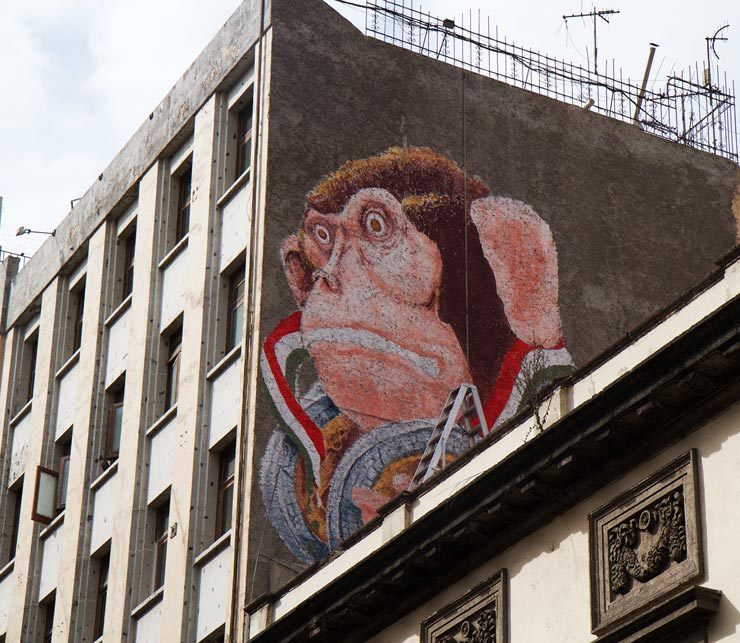 So, he says, "the owners were a little bit scared about the ribbon around the monkey." For those living outside of Mexico, no particular association may be made from the green, white, and red bands hanging around the monkey's neck, but here it has meaning.

"It seemed to him (the wall owner) as a direct reference to the presidential ribbon," says Liliana Carpinteyro, Co-Director of the gallery with Arturo Mizrahi about the significance of the "banda presidencial". Many discussions took place between all parties and "in the end the artist agreed to change it," she says. 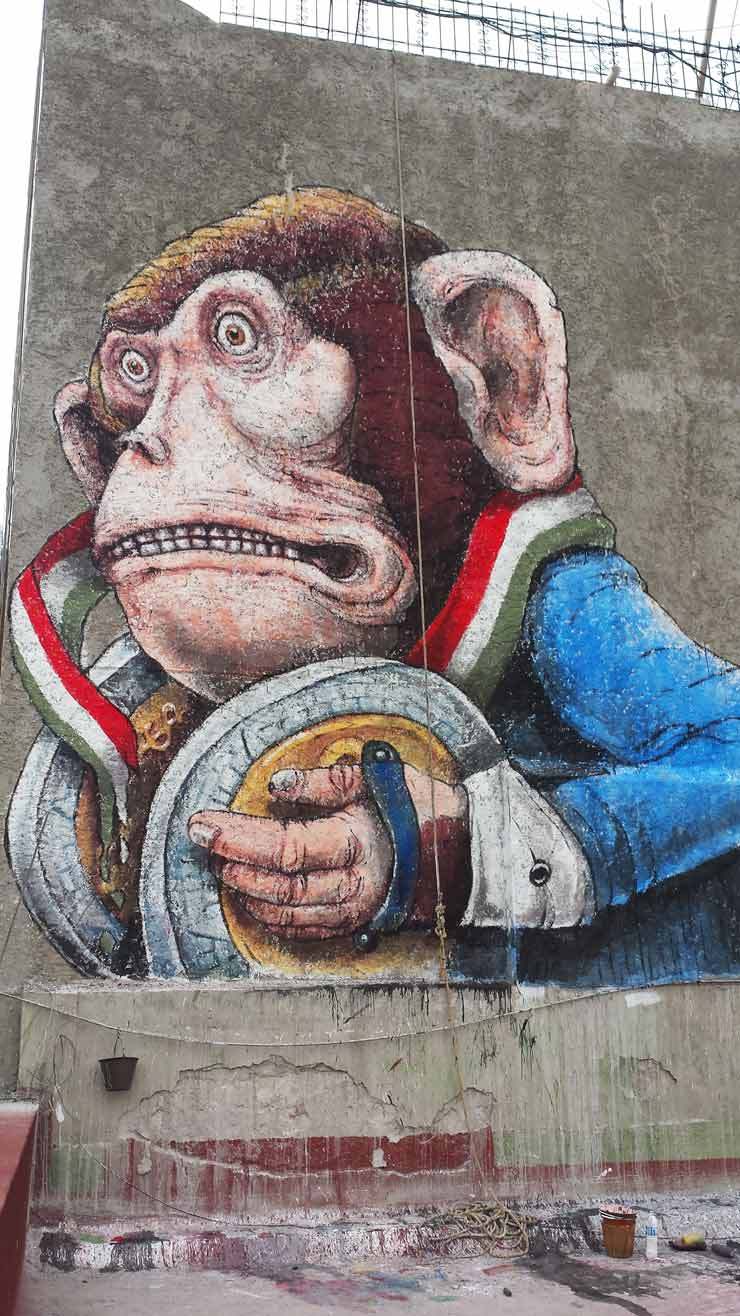 "You have to consider that this piece is located in the main downtown avenue where all the protesters pass through in their way to the Zócalo, where the 'Palacio Nacional,' the national government headquarters, is located," explains Carpinteyro.

Because many people were watching the creation of the wall and sharing images of it across their devices, the blackout sparked a lively reaction that included condemnation for cowardice. "This situation created a social media reaction, people were irritated and a freedom of speech dialogue happened," says Carpinteyro, commenting on the outcry. 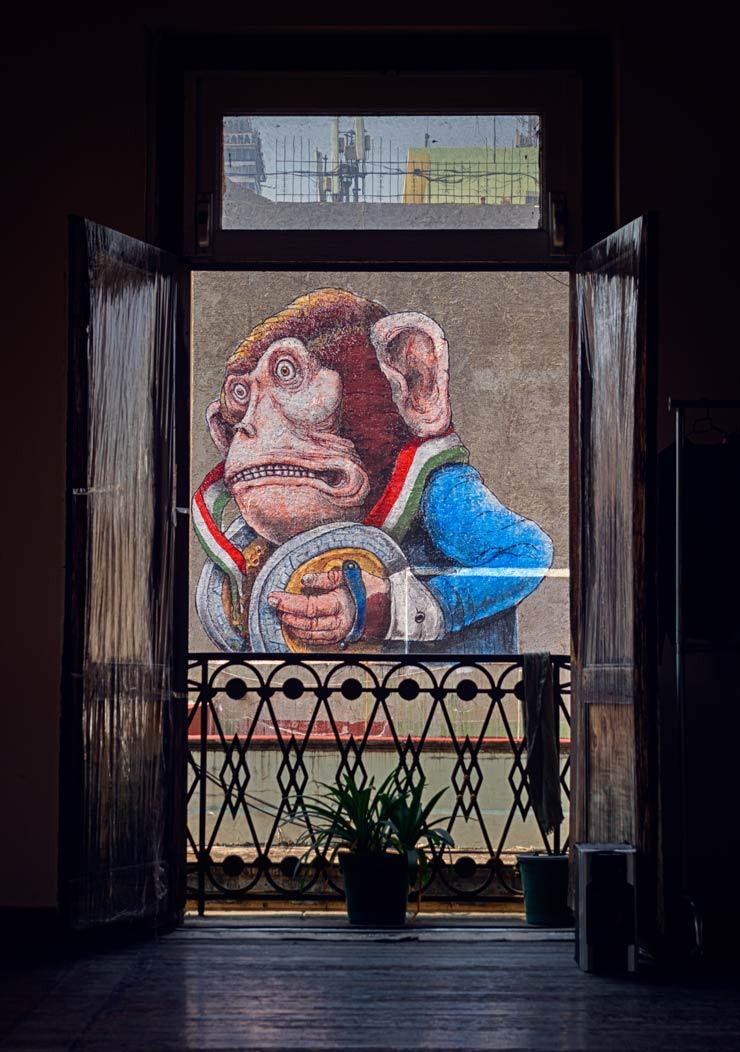 Unable to sway the building owner, the organizers were glad they could keep the monkey nonetheless. Ocampo sees the conversations and "the haters" as a positive development because the art and its censorship sparked just the kind of reaction people should be having right now.

"They wanted us to change the colors to black. But you know what? We like that censorship, and the reactions it produced. That also means that the message bothered someone. We love both images: with the tricolored ribbon and now with black." 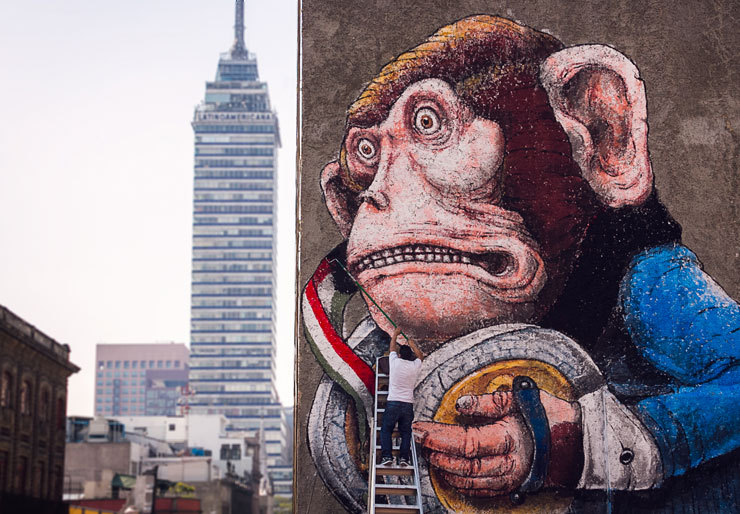 No stranger to controversy, the largely anonymous Italian BLU has similarly featured the banded colors of the Mexican flag in his mural but with bluntly acidic criticism -- with the green appearing as dollars, the white as lines of cocaine, and the red a dripping liquid similar to blood. Framing the flag are military figures standing guard.

You may recall the coffins draped with dollars in the BLU mural that was censored at the Museum of Contemporary Art in Los Angeles in 2011 during the "Art in the Streets" exhibition -- but so far this new one has not merited the same response. 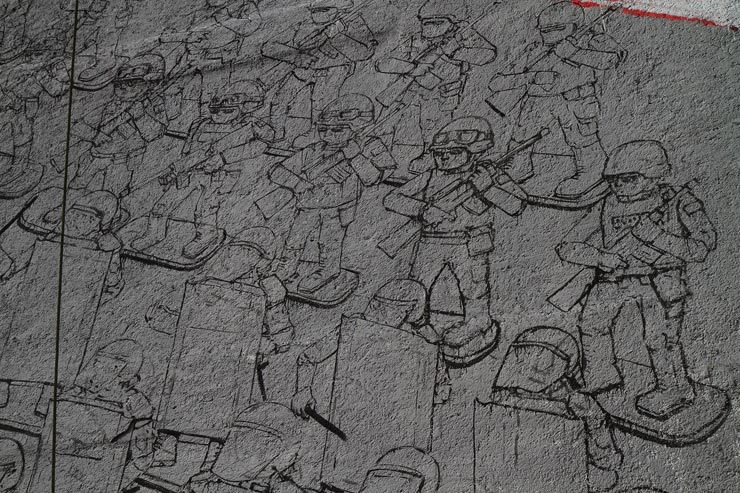 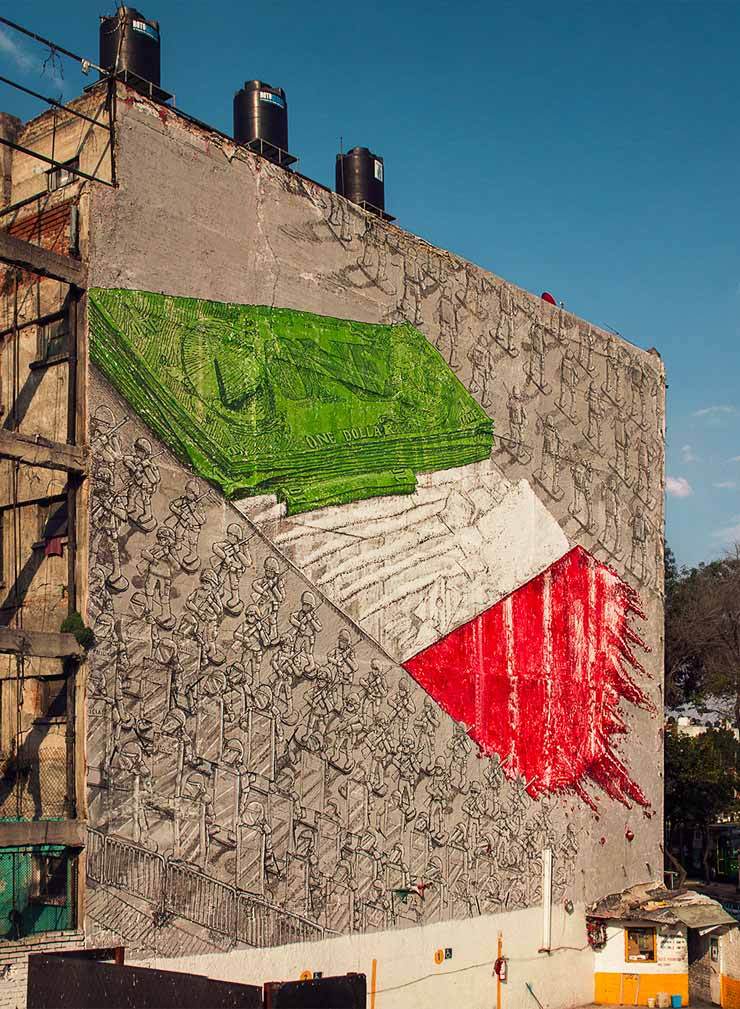 Just finishing her wall for "Manifesto" is the Colombian street artist Bastardilla, who uses a more subdued palette to depict cherubic writers with pencils for arrows afloat on an open text signed "Vivos Los Queremos", circled by alligators in choppy waters.

Meanwhile Erica Il Cane has just completed his second mural yesterday; much less invective, but terrorizing in its metaphorical circumstance. A snaggle-toothed and spotted member of the leopard family lowers his snapping smile upon five rabbits standing on hind legs as if to great him. One bunny even appears to offer a carrot. Another of los conejos is wearing an arm-band with the number "43".

Ocampo says it is a little difficult to get new walls right now, but the organizers are not giving up. "Obviously the project will not be cancelled but we are still trying to get those permissions."

"We think this incident is a reflection of the self-censorship that we decide to live in," says Carpinteyro, "perhaps a result of living in a political system that for years has oppressed the weakest. But its also evidence that art has the capability to move people." 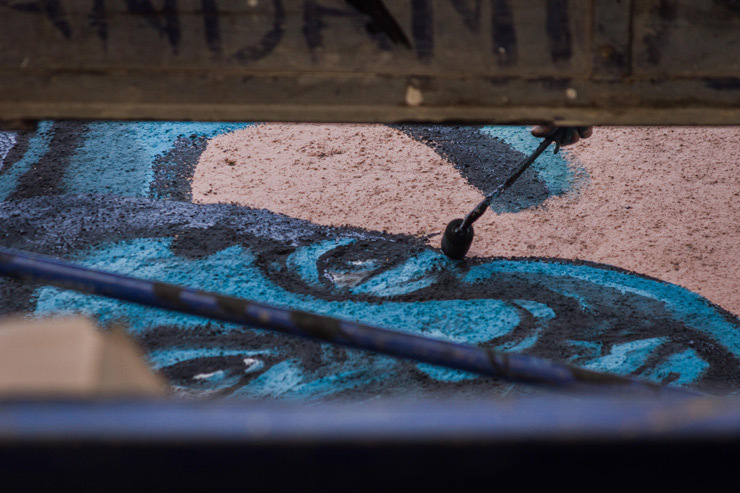 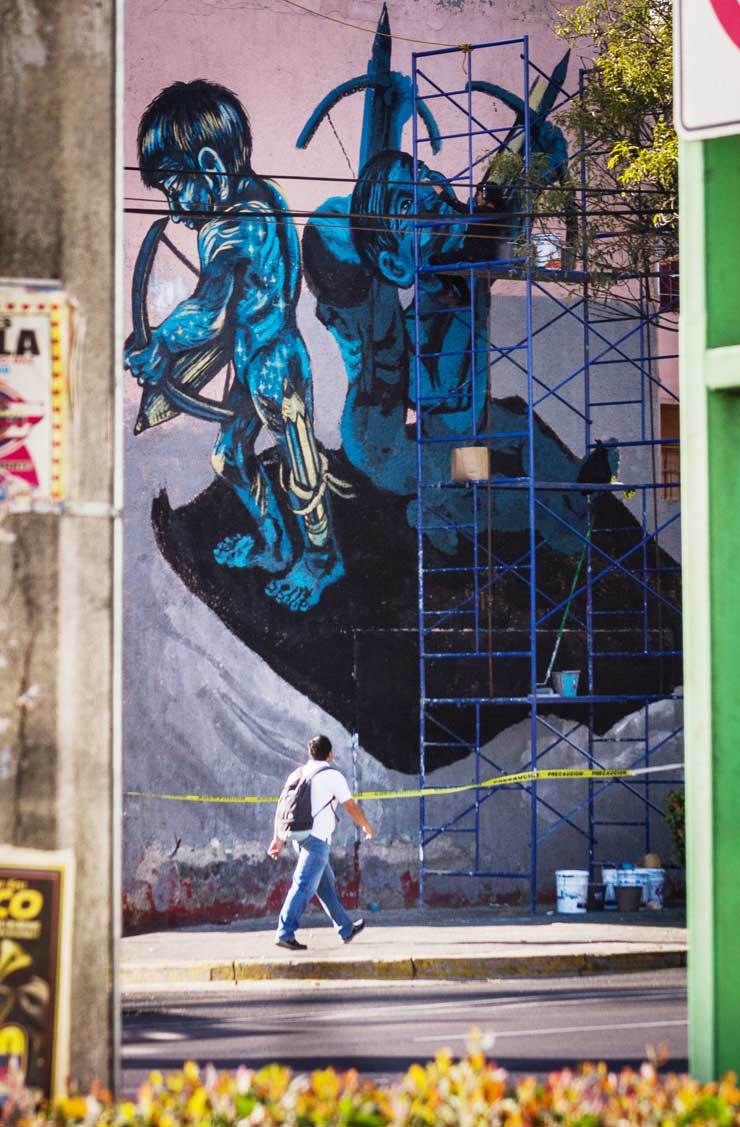 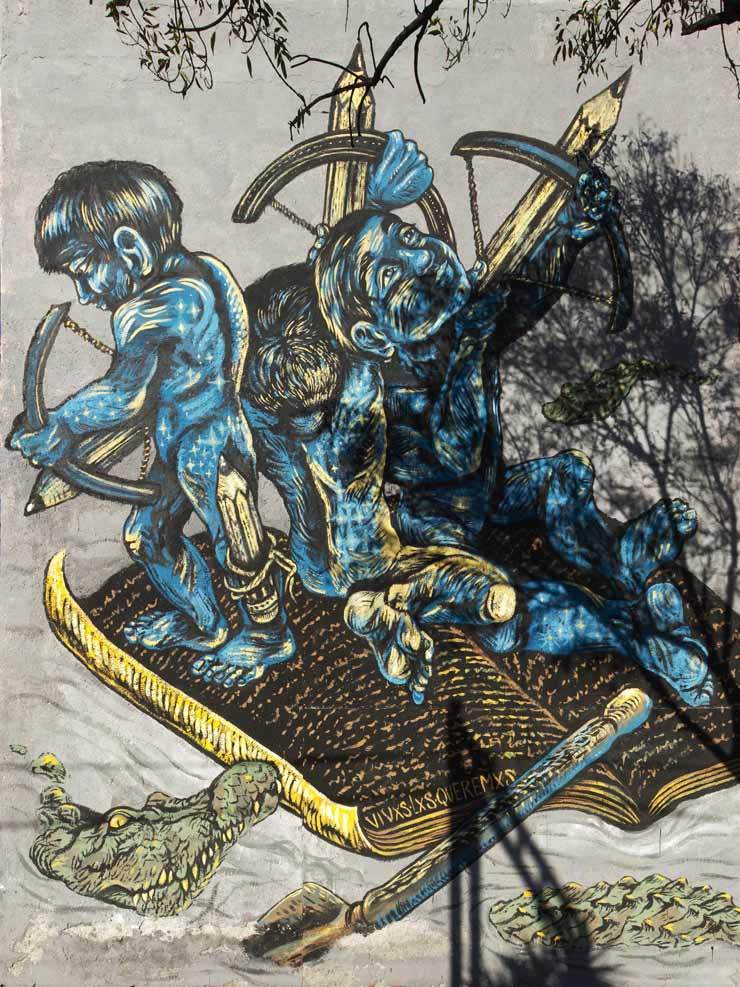 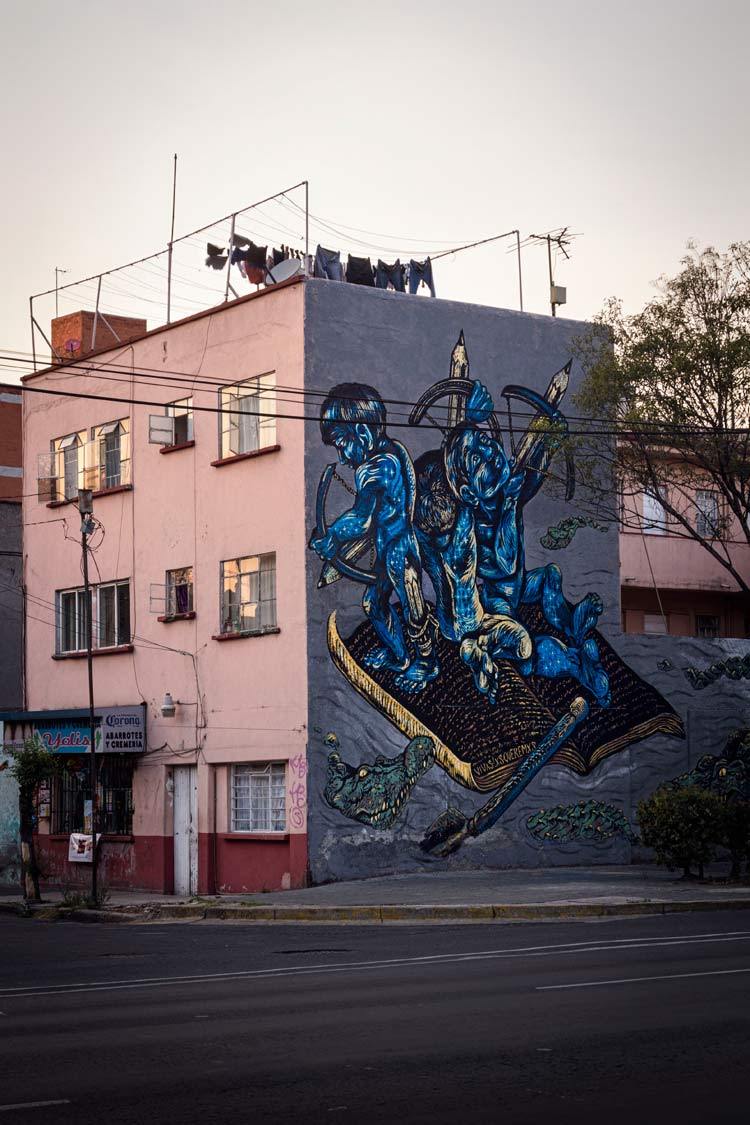 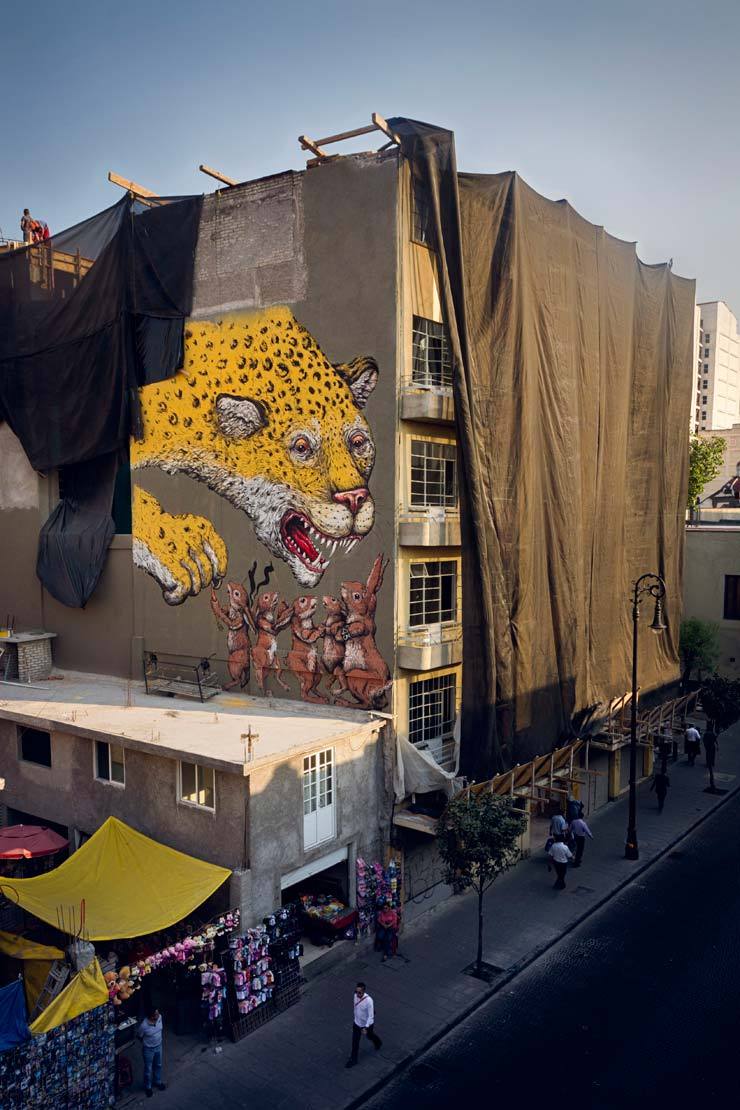 Our very special thanks to Emilio Ocampo of FIFTY24MX Gallery @fifty24mx for his assistance with this article and to Nasser Malek Hernández @nssr21 for sharing his photos exclusively with BSA readers.