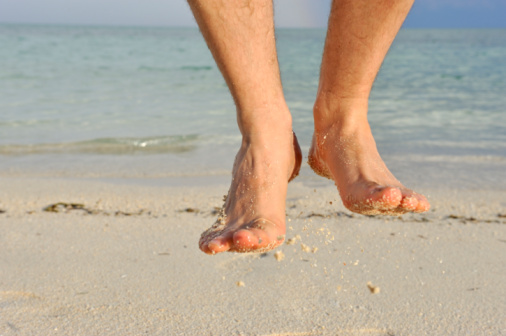 OGALLALA, Nebr. - When people exclaim, "My feet are killing me!", it's usually in reference to severe foot problems, improperly fitting shoes, or an occupation involving being on one's feet all day. Unfortunately, for Cary Hopper, the problem was even more dangerous: His feet were actually attempting to murder him.

"I wish I had a logical explanation for it," complained Hopper, "because I admit it sounds crazy. All I know is it happened." Hopper recalled the first time he realized something was very wrong. "I woke up choking, gasping for air. My feet were around my neck, almost as though they had a mind of their own, attempting to strangle me!" Things got progressively worse. "A few nights later, I was jolted awake with the most painful blows to my head. My feet were clutching my alarm clock and smashing it into my skull!"

Hopper chalked it up to having nightmares, and thought it was just a fluke. But later that week, another even more frightening incident occurred. "A searing pain in my neck woke me from a deep slumber. The sheets were covered in blood and my feet were clutching a knife and slashing at my neck." Hopper immediately called the police and had his feet arrested for attempted murder. "Unfortunately, I had to go along with them into the holding cell," revealed Hopper, "but I'm determined to get this thing resolved."

According to Dr. Eduardo Rivas, chief of psychiatry at Nebraska Union General Hospital, "Mr. Hopper is clearly suffering from a rare condition known as Homicidal Transference Affliction, in which pre-existing feelings of self-loathing and despair become manifest in self-destructive ways; in particular, the subconscious directs the body to destroy itself. It's very frightening and very dangerous, often fatal. But if it's caught early enough and treated with a combination of therapy and medication, it can be controlled."

Hopper is hopeful that he will get his problem under control. In the meantime, he has retained the services of attorney Gregory Keller to defend his feet. Keller recently had success in a similar case in which a woman nearly died after having received a severe tongue-lashing - from her own tongue.