Ever been talked down to by a man who is trying to explain something? Oxford Dictionaries understands.

This week, Oxford Dictionaries announced some new additions to their online database. Listed alongside "clickbait," "douchebaggery" and "side boob" is everyone's favorite uncomfortable experience -- "mansplaining."

The etymology of "mansplain" can be traced back to 2008, when Rebecca Solnit wrote an essay titled "Men Explain Things To Me." The author touched on the idea that being talked down to and corrected -- primarily by men -- was a common occurrence in almost every woman's life. In her words:

Every woman knows what I’m talking about. It’s the presumption that makes it hard, at times, for any woman in any field; that keeps women from speaking up and from being heard when they dare; that crushes young women into silence by indicating, the way harassment on the street does, that this is not their world. It trains us in self-doubt and self-limitation just as it exercises men’s unsupported overconfidence.

So many readers were familiar with the experience that "mansplained" popped up soon after Solnit's piece came out. It was a 2010 New York Times Word of the Year, and has inspired at least one Tumblr account where women share their cringe-inducing stories. 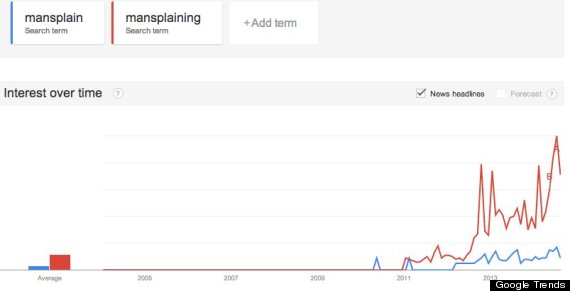 The rising popularity of "mansplain" and "mansplaining," via Google Trends.

While some mansplainers may have good intentions, speaking to (or, more typically, being spoken to by) someone who immediately assumes they know more than you do is irritating at best and downright offensive at worst.

In a July 15 piece for The Cut, Maggie Lange nailed what makes the phenomenon so infuriating: "Mansplaining particularly requires ignoring any commentary from the listening party about their expertise, previous understanding, or general presence of baseline intelligence."

So, while mansplaining may have made it into the dictionary, we hope the trend doesn't stick around forever.