Some people -- your friendly editors and reporters at HuffPost Tech included -- are on the Internet so much, they may as well live there.

Over on his Deviant Art profile, Martin Vargic has imagined such a place with "The Map of the Internet," an exhaustively detailed map featuring places like the Spam Ocean and an island country known as BitTorrent.

Check out a condensed version of the map below. Click here to enlarge for a full-sized version. 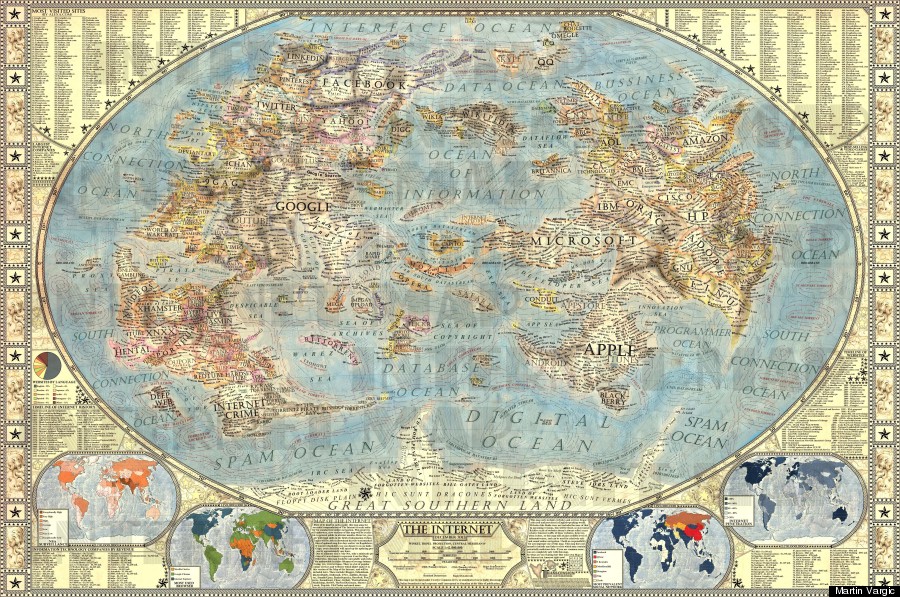 Vargic, a student and amateur graphic designer from Slovakia, told The Huffington Post he originally was inspired to create the map after seeing xkcd's "Map of the Internet" in 2010. Vargic started by increasing the scale and creating a new model based off National Geographic maps, working 10 hours a day for three weeks. The result, according to Vargic, is still a work in progress.

"The map is divided into two main parts; software companies, gaming companies and some of the real-world oriented websites are located on the right part of the map, or 'the old world,'" Vargic told HuffPost in an email. "The websites and majority of Internet itself is located on two eastern continents, the upper one showing social networks, forum websites, blogs, and the lower one filled with adult-oriented websites and Internet crime."

The project also includes four mini maps showcasing NSA surveillance, a list of Alexa Top 500 websites and a short timeline of the Internet's history, in addition to other quirks. Vargic has the 34-by-22-inch version of the map for sale for $34.70.

The real question is: What country would you move to? Let us know in the comments.