We often hear about, report on, and share stories about moms who are given a hard time for breastfeeding in public. In some cases, these women are asked to leave restaurants, stores, even churches because they’re nursing. In others, moms are told that they must “cover up.” The constant in all of these anecdotes is that employees and bystanders are unaware of one thing:

The law explicitly protects moms who breastfeed in public in almost all 50 states.

Forty-seven states, DC and the Virgin Islands have laws that specifically allow moms to breastfeed in any public or private location. Two of the remaining states -- South Dakota and Virginia -- exempt breastfeeding moms from public indecency or nudity laws, and Idaho is the only state that has yet to pass any similar laws.

Currently, the only protection nursing moms have in Idaho is jury duty exemption. The Idaho Breastfeeding Law Coalition started a Moveon.org petition in effort to bring the state up to speed with the rest of the country, but despite its 1,400 signatures, there's no indication Idaho is close to passing legislation.

So, the next time you're in public and see someone sneering at a breastfeeding mom, show them this map: 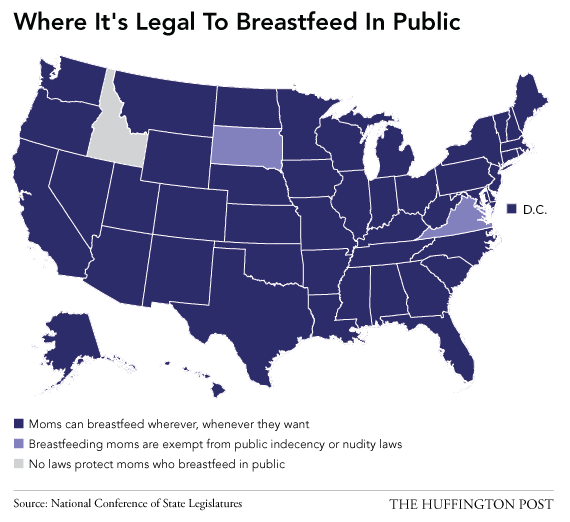 CORRECTION: An earlier version of this story stated that Michigan had yet to pass a law protecting moms who breastfeed in public. But good news! The "Breastfeeding Anti-Discrimination Act" was passed June 24.