New research from Northern Illinois University's Center for Governmental Studies (CGS) found that Illinois lost nearly 10,000 citizens between 2013 and 2014. This was the largest decline in absolute numbers of any state in the nation and the first statewide population decline in Illinois since the 1980s, according to new U.S. Census Bureau data.

Of those, Illinois easily had the largest numerical population decline -- 9,972 people -- followed by West Virginia with a loss of 3,269 residents.

CGS receives embargoed U.S. Census Bureau reports several times each year as one of three coordinating agencies of the State Data Center Network. While the latest report focused on counties, NIU researchers are able to extrapolate that data to draw statewide, regional and even national conclusions.

Overall, the U.S. population grew by less than 1 percent. The states that saw the largest gains nationwide were Texas, California and Florida.

Taylor said past trends indicate most of those leaving the Land of Lincoln are not seeking warmer climates but rather moving to neighboring states.

Check out this map from the NIU study to see where Illinoisans moved in 2013: 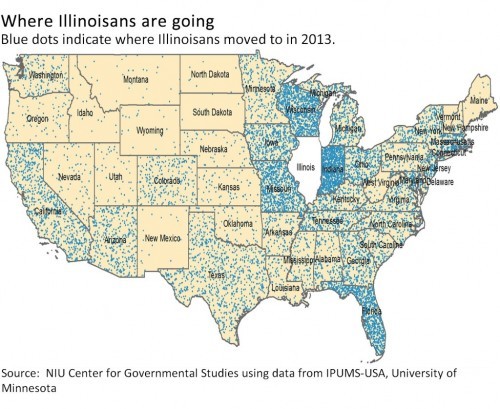 Check out which 8 states Illinoisans moved to the most between 2010 and 2013 at Reboot Illinois.

NOTE: This article originally appeared on the NIU Newsroom.

NEXT ARTICLE: 10 Illinois laws every resident should know

RECOMMENDED:
Download
Calling all HuffPost superfans!
Sign up for membership to become a founding member and help shape HuffPost's next chapter
Join HuffPost