It was pretty hard to avoid Mapei last fall. Her hit single "Don't Wait" debuted on The Fader in October and quickly reached No. 1 on Hype Machine. Six months later, she released a remix EP and a music video, but fans had to wait nearly a year for her first full-length album, "Hey Hey." It's due out Sept. 23.

The album is Jacqueline Cummings' tribute to having fun and just straight-up positivity. (Mapei, which means "wise woman" in a Liberian tribal language, is her middle name.) "I was in a dark place in Sweden -- literally it was very dark," she told HuffPost Entertainment, as she sank into an armchair in a Chelsea hotel room. "I did it in the wintertime and I just wanted to get out of that state of mind and have fun and create music that makes me move, and moves me and will move other people." 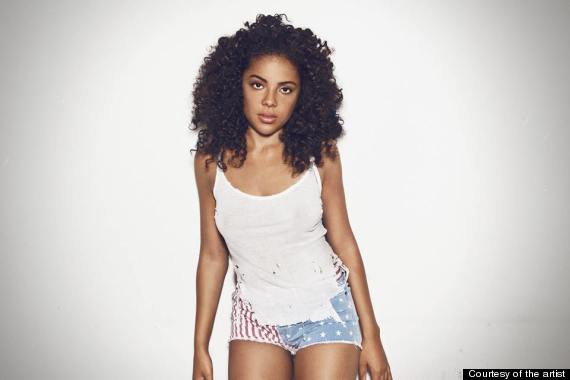 With big, curly hair, Cummings was running late from a salon snafu. "Something fell out, right?" her handler noted. She's smaller than you'd expect, draped in a big black cape-like piece of fabric, covering a crop top. Subtle circles under her eyes betrayed her high energy -- "I just want to be on the road for a long time" -- and confirmed lyrics that praise "a generation that stay woke until dawn."

Thirty-year-old Cummings has been working in music for a decade, first as a rapper in Sweden, where she has lived on and off since age 10, then recording in the studio with French duo, Justice. But she scrapped that album in 2009, saying it "wasn't her style," and took a few years to plan her next move, the album that would become "Hey Hey."

Her rap background is featured in bits and pieces on the record, but Cummings' doo-woppy singing is the album's backbone. "I wanted to do a collage of music because I don't want to be tied down to one genre," she said. "I could do a solo album or a spoken world album. Maybe I'll do that in the future, but I just wanted to do a solid pop album." With clear techno and R&B influences, Cummings' tracks could easily be radio hits or the soundtrack to your neighborhood's coolest house party. "I call it pop because I don't know what to categorize it as. I think our generation enjoys music in general. It's not like you have to like punk to be cool anymore."

The success of "Don't Wait" helped Cummings land a gig opening for John Legend during his August tour dates, but she's now opening for Lykke Li, whom she's known for years. The two artists met in the Swedish music scene and Cummings' even rented Lykke Li a room in her Bushwick apartment when she first moved to the States 10 years ago. "We were a girl gang that just wanted to act and do music," Cummings said. The two hadn't spoken in about five years, but Lykke Li reached out to her on Facebook, inviting Cummings on tour. "It just feels natural. I guess that’s how the universe works. The spirits want us to be connected."

Cummings knows she owes most of her current hype to the success of that one single, "Don't Wait." "I knew I wanted it to be played in clubs as soon as I finished it. I was like, 'This is going to be a club hit.' But I didn’t know it would have seven million plays on Spotify and take me to all these places." She slid deeper into her chair, hands crossed over her stomach. "It's pretty cool what a song can do."

Mapei's "Hey Hey" is out Sept. 23 on Downtown Records but is available to stream over at NPR.