I've been lost in Westeros for years.

As I followed the travels of the characters I'd be in King's Landing one moment, up on top of the Wall the next, before marching south through the Neck with Rob's army. We hear kings and generals debate strategies and troop movements dictated by rivers, mountains and forests. The Game of Thrones is played on a board, and that board is the geography of Westeros.

To understand the interwoven tapestry of George RR Martin's epic I needed a map, and though the maps at the start of the books are clear, they left me wanting. How are the Free Cities positioned relative to Westeros? How great are the lands north of the Wall? And where on earth is Asshai? Somebody needed to create a map of the whole world.

I received the email in early 2012. Of course I said yes.

Illustrating the maps for The Lands of Ice and Fire was a large commission. The final result is 12 maps, each 2 feet by 3 feet - 72 square feet of cartography in total, many of which link up and overlap. The trick with a project of this size and complexity is organization. The first order of business was to create a working draft of the full world from George R. R. Martin's sketches. I've worked with a range of authors - some provide detailed Photoshop creations, others hand over abstract works in colored crayon (yes, really). George Martin had sketched the world on letter paper, with an HB pencil - and the sketches were the perfect reference. Each location was labeled in neat caps, different terrains were clearly indicated and the sheets all lined up. With the scans in hand, I built a patchwork quilt of the entire world in Photoshop, cleared it with Random House, and got to work.

The most important property of a map is the clarity and accuracy of the information. I begin any commission by inking the coasts, forests, mountains (so many mountains), and placing icons for the towns, cities and castles. Then I lay in the labels. With novels, games, fansites and, of course, the HBO TV series, there's a lot of information about this world that had to be right. Thankfully Elio and Linda from Westeros.org were brought in to help out with the fact checking. They also did a stellar job going through the novels to plot the travels (and travails) of each character for the Journeys map. A warning for those who haven't read up to the last book - the Journeys map contains some spoilers. There are many character paths that end prematurely.

Once the labels and lines were in place the maps were completely functional. At this stage they were sent back to the publishers and GRRM to okay, before being colored. This last stage always takes the longest, but is also the most satisfying. It's a pleasure to see a map go from skeletal lines and raw black text to a fleshed out multicoloured world. It's a lot of fun to lay in shadows and pull mountains out of the page that cleave a world in two. I really enjoyed sketching in the different cities, castles and towns on the detail maps - the great stone dragons of Dragonstone, and the aqueduct and Titan of Braavos are particular favourites.

After months of back and forth, intermediate versions that arrived through the post with a blizzard of post-it note edits, and last minute tweaks (bump up the exotic purples of the jungle, make the Paps more ... rounded), the maps were turned over to the printers. I couldn't touch them. They were done. From that day I didn't open the files, didn't even glance at a thumbnail. I waited for Winter to come.

Sure enough, as the nights drew in, a package arrived in October. I opened my artist's copies with some trepidation, and then with a huge sigh of relief. I love them, I'm very proud of the result, and my wife and I have the Lands Beyond the Wall hanging over our dining room table. It was a privilege to spend so much time immersed in the world of A Song of Ice and Fire.

I hope that these maps provide direction to those, like me, who enjoy getting lost in Westeros. 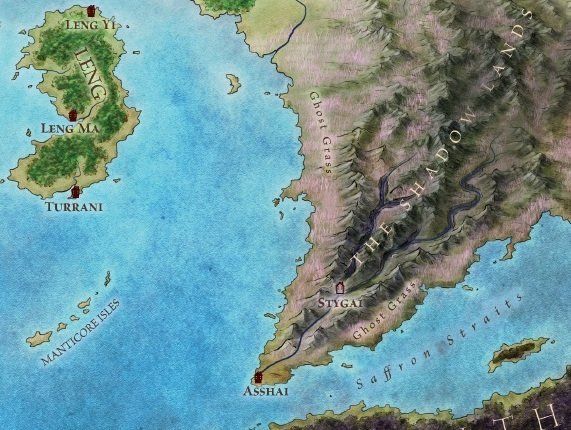