We've entered the three-week haze of New York Film Festival screenings. One of the first we caught this week was "Maps to the Stars," David Cronenberg's drama about a circle of interconnected Hollywood denizens who are maniacal about fame. An outlandish couple's (John Cusack and Olivia Williams) young daughter (Mia Wasikowska), an unstable burn victim, lands a gig as the personal assistant to an aging actress (Julianne Moore) while her urchin of a brother (Evan Bird) relishes his child-star spotlight. In between, a lot of odd, creepy things happen.

While "Map to the Stars" seemingly lacked a cohesive message, two editors for HuffPost Entertainment, Matthew Jacobs and Erin Whitney, had plenty of thoughts about the film. There are plenty of spoilers ahead. 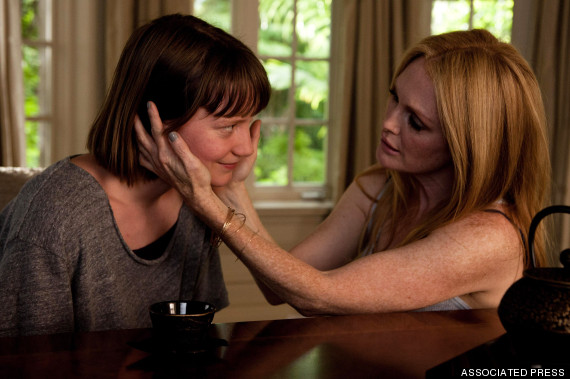 Jacobs: Wow. Leaving the Walter Reade Theatre after our "Maps to the Stars" press screening on Wednesday, I could have sworn I'd swallowed the cocktail of prescription meds that Mia Wasikowska's schizophrenic burn victim gobbles up. The movie tries to be a symposium of ideas about fame and reconciling one's stormy past, but instead its pretentious nonsense left my head swimming. Brimming with Cronenberg's signature closeups, the actors and agents and wannabe screenwriters and momagers and Carrie Fishers in "Maps to the Stars" think they're saying a lot even though the opaque plot unfurls with the same maddening vacancy that made me dislike "Vanilla Sky" years ago.

That said, the movie boasts some great performances (namely Julianne Moore) and does offer, for better or worse, Things To Think About. Mostly I just enjoyed the tongue-in-cheek references to gunning for Oscars, converting to Scientology as a "career move" and finding a personal assistant as reliable as Nicole Kidman's or Halle Berry's. What do you think, Erin?

Whitney: My thoughts are still scrambled and probably will be for a few days. Once the credits began rolling I had the same overwhelming what-the-hell feeling that I did when I saw Jonathan Glazer's "Under the Skin" earlier this year -- an equally bizarre and uncomfortable film that sends your mind reeling. Yet I still don't find myself disliking Cronenberg's latest mesh of Hollywood cynicism and (spoiler alert!) incestuous entanglements. There's just something about a movie that leaves me in a frazzled, somewhat disturbed mindset that I kind of love, and now the more I think about "Maps to the Stars," the more I'm fascinated by it.

Now, by no means is this a particularly pleasurable film to watch or one that I think can even fit onto the spectrum of good or bad. It's like a giant nasty puzzle of a perturbed therapy patient's worst thoughts all blended up in a Vitamix on the granite countertops of a Hollywood Hills home. It gives you the frightful, unsettling story you'd imagine in some eerie small town filled with nobodies, and places it in the glamorous lives of actors. Cronenberg's symbolism of, and commentary on, the nature of the film industry: it's incestuousness and nepotism; it's pompous, desperate cries for fame and recognition -- these are the most compelling aspects of the film for me. Though I admit, it does have its handful of structural problems and incoherence. There were a lot of ridiculous moments though and I'm curious, Matt, which ones pushed you over the edge?

Jacobs: My main qualm is that Cronenberg and screenwriter Bruce Wagner reach for bizarro ways to interconnect these characters. It's hard to describe exactly what I mean without giving away too much, but it involves two instances of incest, multiple incidents of arson and/or battery, ghosts relaying rudderless wisdom from beyond the grave and one Paul Éluard poem, of which the significance I can't even pretend to grasp. But I'm also put off by the environment they're drawing from, which you allude to as well, Erin. I love a good biting portrait of Hollywood. Robert Altman's satire "The Player," to draw from a more classic example, captured the world of film development marvelously in 1992, and another NYFF flick I saw this week, the Juliette Binoche-Kristen Stewart vehicle "Clouds of Sils Maria," handles the pangs of fame's identity issues much more poignantly than this. But there's a serious lack of humor in "Maps to the Stars," so all the coldness of the Hollywood Hills is folded into a tale of messy ideas that aren't especially entertaining or penetrating.

Back to Julianne Moore, though: She really is wonderful here. Moore is best when depicting extremes: buttoned-up housewives (as in "Far From Heaven" and "The Hours") and manic obsessives (as in "Boogie Nights" and "Magnolia"). She's in the latter camp here, with every plastic smile that spreads across her fame-hungry character's face revealing a sense of desperation. As much I found the rest of the film dismissible, it might be worth seeing just to watch her. Moore's character is certainly better than the Bieber-esque little brat who somehow gathered his sense of entitlement from starring in a movie called "Bad Babysitter." Again, what world are we living in? I'm just not sure this film, for all its intriguing ideas, has much to say.

Whitney: I have no idea what kind of world we're in for the 111 minutes of the film, but I can't help wanting to figure it out. It has that surreal, foggy atmosphere reminiscent of "Mullholland Drive," where lines between dream and reality are so blurred that every moment feels like a disguised nightmare. Cronenberg and Wagner manage to crawl under your skin with their repulsive characters and the former's signature instances of body mutilation -- said arson/battery, incest (so trendy lately) and also a rather grotesque use of the now-extinct Genie Award (another moment of industry humor). Those are some of the most outrageous parts in the film, which also features a threesome-turned-"Shining"-ghost-make-out moment.

Damn, Matt, I feel like we've spoiled this movie for everyone! But then again, if you're into creepy, chills-inducing cinema, then "Maps to the Stars" is worth a visit. It at least gets you thinking in ways that few movies have managed to in this year's absence of thought-provoking films. And sometimes, for me, struggling to understand a film's odd obscurities is more entertaining than much of the hackneyed storyline and reboots that fill theaters of late.