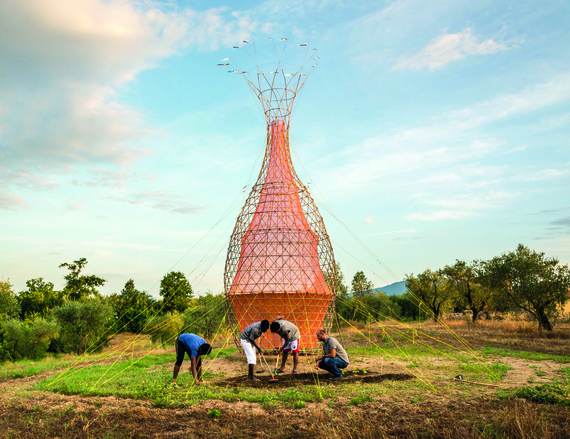 To reside. To inhabit. For most people the two words are synonyms. Not so, argues geographer Michel Lussault. The two terms have really nothing to do with each other. That difference rests at the base of two stunning, often shocking, exhibits this summer in France, one of them deep in the southwest wine country of Bordeaux, the other in northeast rustbelt town of Metz--including mind boggling revelations about the U.S.

First Bordeaux, one of the cleanest, calmest and most charming of French cities where the always intrepid Center for Contemporary Art shares space with a futurist architecture museum called Arc en Reve--or dreaming about the architecture of the future. First and foremost is the remarkable array of new ways humans are learning to build homes and live in them all around the world--be they grass houses in Amazonian Brazil equipped with satellite dishes, vegetable water purification installations in Luanda, collective family housing built by the residents in a French chestnut forest, bamboo drinking water collectors in Ethiopia or nomadic senior centers traversing heartland America.

Labeled Constellation.s, the exhibit, mostly visual, take up half of a restored 18th century warehouse in, walking distance from the cathedral. While creative development of architectural materials is the technical side of the exhibition, human ingenuity under adversity is the real subject, or in the words of the site's director, Francine Fort, illustrating "how ordinary people are inventing their daily lives." Which brings us back to the words of Michel Lussaut, the geographer.

To reside in a place is not the same thing as to inhabit that place. All of us at any particular moment reside in some particular piece of geography, which at that moment we call "home," but in a world that is ever more mobile, ever more concentrated in massive urban sprawl, our "habitation/s" have become more vast than our parents and grandparents ever imagined--an issue that was plainly present in last week's cataclysmic BREXIT vote to leave the social and political habitation called Europe.

As Lussaut explains in very clear terms, our habitations incude three key elements: our anchorage by work, play, sleeping and eating; our need to move about, more and more by automobiles but also on bikes, scooters, in subways or by foot; and lastly our means of connecting to one another, be it by telephones, text messages, internet letters or waiting in the station for a train or a plane. All these three define how we inhabit one place or many places on this shrinking and ever more crowded earth. How we figure out these three dimensions, be it in Luanda, Manilla or Tent City, New Jersey, reveals the dimensions of our habitations.

For Americans, one of the most startling displays illustrates how deeply nomadic we have become. Between two and three million US citizens, very few of them "the poor and homeless," live perpetually on the road, and they are increasingly senior citizens anchored together by meals, fishing, volleyball or hiking, moving mostly by one form or another of mobile home across the major interstate highway system, and connecting by internet between, say, Portland and Atlanta as across the Mississippi River between St. Louis and East St. Louis. 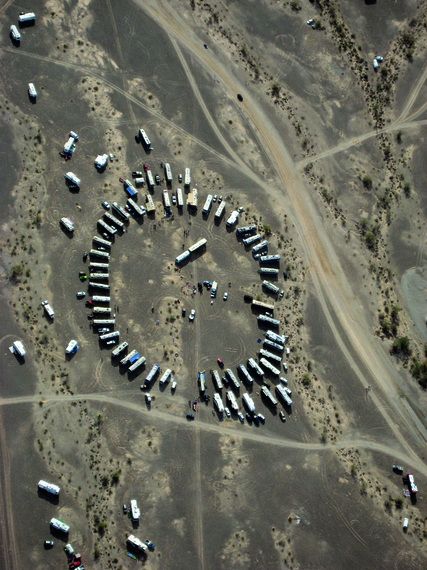 Senior Recreational Vehicle Community of the US, Deane Simpson

They are clustered along two major east-west routes sometimes in public campgrounds and other times in huge Walmart parking lots. This steadily expanding population of nomads continue to pay taxes, collect social security, consult doctors all the while posing tracking challenges for those charged with public security and money management.

A world that is ever more mobile at the same time as it "resides" in ever more concentrated places, also poses profound challenges for architects, builders and waste collectors--a theme at the heart of the Constellation.s exhibit. 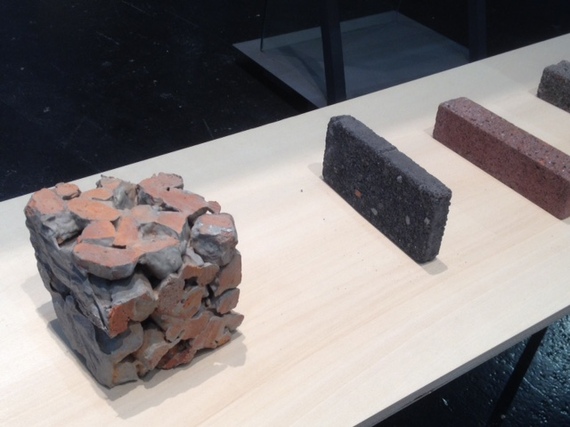 Chinese Plastic & Refuse Bricks
China, the most densely populated nation on earth, has figured out how to integrate mountains of plastic waste into new lighter weight "cement" bricks that can be recycled over and over. A low income community outside Liverpool is building two-story wood frame "half houses" as money and demand allows them, working with designers to provide air and light at the same time as leaving space for later arrivals to "fill in" the second half of each house. Brazilians in Rio de Janeiro's favelas are girding up their dwellings at the same time as they are working with water and plant experts to create pools, fountains and vegetable gardens in the core spaces inside their habitations.

Six hundred miles to the northeast, in Metz, in the city's contemporary art center, known s FRAC Loraine, two dozen "map artist" show us how cartographers both guide us through the world but define how we see and understand the world. Called Sensitive Zones, the show starts out with two stark illustrations: a medieval "map" of Europe in which the face of Mary defines the Christian habitations versus the outsider infidels. 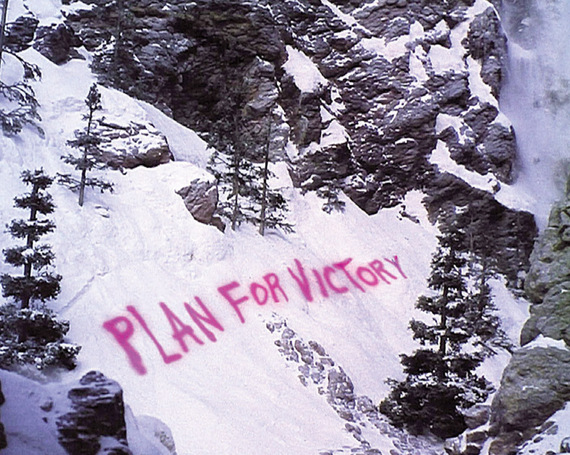 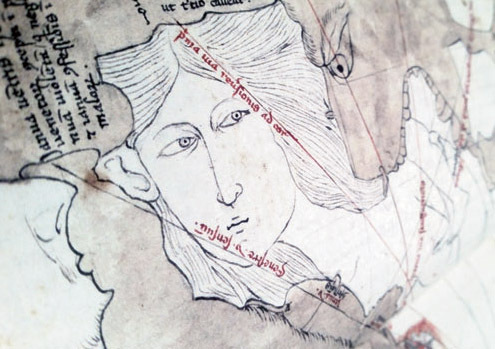 Across the room in another version of "Christians" versus other infidels is a short video drawn from George W. Bush's third Gulf war in which an avalanche destroys a painted sign, "Prepare for Victory."

Further on is a global map illustrating the density of monotheist believers and in which direction--north, east, south, west--the believer turn to pray toward their religions' founding centers in the Middle East. 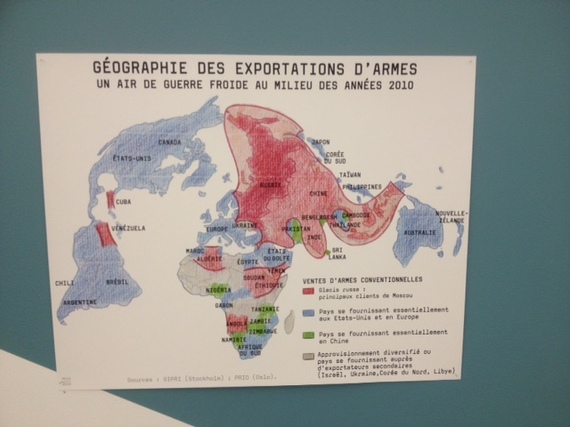 But surely most provocative is a final set of global maps and charts detailing the last century's deadliest wars, which countries are the major arms suppliers and how long those wars lasted and deadly they were.

While there was no intended coordination between the exhibits in Metz and Bordeaux, they both demand that we rethink how we construct our sense of home in this world including our ever greater collective displacement. For more and more of the earth's humans, the concept of home is a fluid notion--and the maps that guide us through that fluidity illustrate and define how we navigate amongst our many simultaneous habitations.