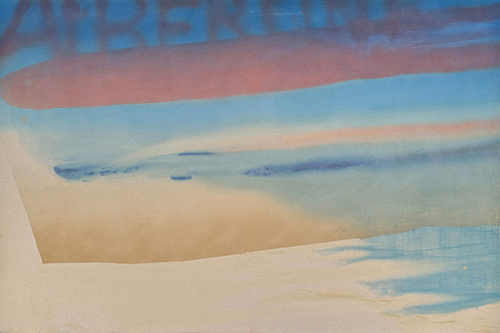 In this series of paintings by Mara De Luca, a combination of nebulous skies and vistas merge with luminous and lunar light plays. In every painting the earth's atmosphere is used like a stage back drop to create a specific ambiance. Washes of color make suggestions; a pre-dawn sky, a horizon filled with clouds or stars, aerial lights, and fog blanketing everything like a filter of fuzzy grayness. There is great and subtle beauty in these large paintings. Yet there is something about them that takes them far beyond just being lovely to look at. There is a disorientation in the locales, time is only vaguely referred to, no clear landmarks are visible, and the resulting feeling is a bit like being cast adrift in the sea. It's disquieting in these ultra calm landscapes. Hints of man's existence is found in words that are not easily defined, perhaps left floating in the sky by an airplane's sky-writing message. Patterned lights invite ideas of landing lights or homes at rest in the valley, lit up at night. 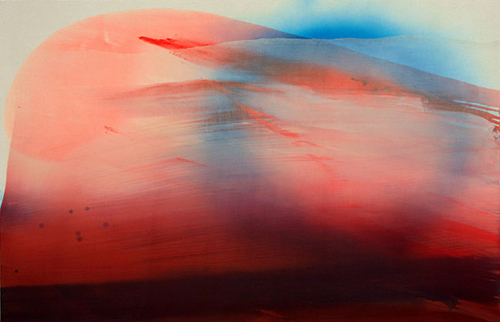 References to Ed Ruscha's spray painted back drops are in abundance with references to nights alight by fire, search lights or grids of homes. While De Luca uses words sparingly, she concocts the same kind of feelings as Ruscha, where a hovering in the atmosphere of something vague and indistinct speaks to the places we live in. 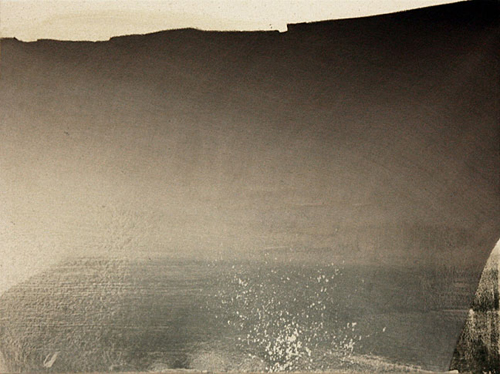 De Luca has stated that she is influenced by her adopted home of Los Angeles and you can see this in the vivid sunset colors and in the murky and clouded denseness that fills up the plane from horizon to ocean to shore. Influenced, again like Ruscha, by advertising, De Luca goes for modern references purposefully invoking digital fade backgrounds and graphics.