And then again, sometimes an artist makes such a stunning leap in their work that some of us who have been watching their progress for a while are left dazzled in the process. Such was the case with Mara Pollins Costello's work last summer. I remember walking into a small exhibition that she was part of and being stunned by what I was looking at: Instead of being confronted by the landscape paintings that I had come to associate with her, Pollins Costello had mounted a sharp shard of glass that was hung from a transparent string and, via a video projection, a landscape image circled the room, making a running commentary on what the viewers thought they were seeing. I remember being simultaneously compelled by the simplicity and beauty of the ever-changing image, even as I engaged in a horrifying discussion with myself about what would happen, should the string break and the jagged shard of glass come tumbling down on me. Happily, that did not happen. Yet I found that I could not stop going back to view what, to me, looked like a moving painting. And I particularly enjoyed the argument that was developing in the ever-changing images that circled the room -- calling the viewers to pay attention to the landscape around them. Making the argument that there was more than we could see with the naked eye. And, finally, that the landscape -- and consequently we ourselves -- are in peril, hence the shard of glass that refracted the image in a plethora of ways.

Pollins Costello's engagement with the land and with landscape emerged at an early age. She was born in Pittsburg, Pennsylvania and would grow up on a two hundred-acre farm owned by her parents which shows up time and time again in her work. She reports being an only child who was never inhibited. "My mother had a real passion for art," she told me, "and she really encouraged my artistic pursuits. I do not remember a time when I was not an artist. It seems I was always a painter." In high school she did a lot of sewing, before going off to Kent State to study fashion design. At Kent State, however, she missed the freedom of making things, and eventually changed her major to art education, because "I wanted to work with people and to be in a more solid field." While getting her art education degree Pollins Costello took many painting classes and started pulling together the body of work that she would eventually use to enter graduate school.

This earlier work, like her current preoccupation, was focused on organic forms. "For a long time I was interested in painting the structures of diseases because, in looking at them, I found them quite beautiful," she said. "But more than that, I guess what I was trying to do is make something ugly more beautiful. I guess this work, too, for me was related to fear and terror. When I was a kid my mom was sick, and so diseases and talk of their etiology were around my house. In time I started incorporating this into my work."

Following several years of teaching, Pollins Costello decided to return to school to get her master of fine arts degree. "Teaching demands so much of you, and I wanted to be in a community that would nourish my own artistic path. I wanted, as well, more of an artistic community." Graduate school would help her to broaden and extend her definition of what art could be and before long she found that her own work began radically shifting and changing. "I know myself primarily as a painter," she told me, "but in graduate school I started exploring mediums that were new to me. I liked the idea of exploring the same idea in various mediums and I set this as a goal for myself. Soon, I started exploring, for example, time-based work and video work, alongside my practice of painting. These explorations for me proved quite fulfilling."

Her investigations are on full display in her most recent exhibition. In her just-completed thesis show Pollins Costello presented a series of stunning paintings, alongside sculptural work, and a video installation. In her paintings she admits to "letting what happens, happen to the paint. In these paintings I am surrendering control to the medium of paint." For the artist, paint became the matter and material that make up the Earth. The works ostensibly challenge the viewer's notions of being between heaven and Earth. These works, with their various and slight gradations of color, can be rightfully understood, as Pollins Costello described them to me, as "a field of forces." They are simply breathtaking to look at.

The paintings are in direct conversation with a series of long, gorgeous branches that cast shadows on the floor reminiscent of the paintings. Together the paintings and the branches make a coherent statement about the landscape we inhabit and the need to look at and, indeed, safeguard that landscape.

In a small dark room beside her paintings and sculpture, Pollins Costello installed a window at the center through which she projected a video installation that reflected a mirror also hung in the room to recreate the sun and the moon cycles. The work, though deceptively simple, is nevertheless quite engaging. "The window and the mirror," the artist told me, "both reference the Beyond. This work is connected to my sculptural and painting pieces, in that a mirror -- like the paintings I did -- can connect both sky and Earth in one frame." But her loose fleshy and organic paintings and her sun and moon installation are heavily indebted to her earlier investigations into the structure of diseases.

Looking at her trajectory so far, one can see that what Pollins Costello is working with and working through is the terror and beauty of the sublime. One gets the sense, after looking at her most recent body of work, that what the artist is doing is constantly questioning and challenging what we know and what we do not know (and what we do not know that we do not know) about the landscape all around us. The work asks us to question what we can see and what is invisible to the naked eye. What Mara Pollins Costello's investigations do is call us into a discussion about seeing, looking and listening to the place that is our home.

PHOTO GALLERY
Mara Pollins Costello Engages the Terror and Beauty of the Sublime in her Landscape Works
Download
Calling all HuffPost superfans!
Sign up for membership to become a founding member and help shape HuffPost's next chapter
Join HuffPost
Voting Made Easy
Register to vote and apply for an absentee ballot today
Register now 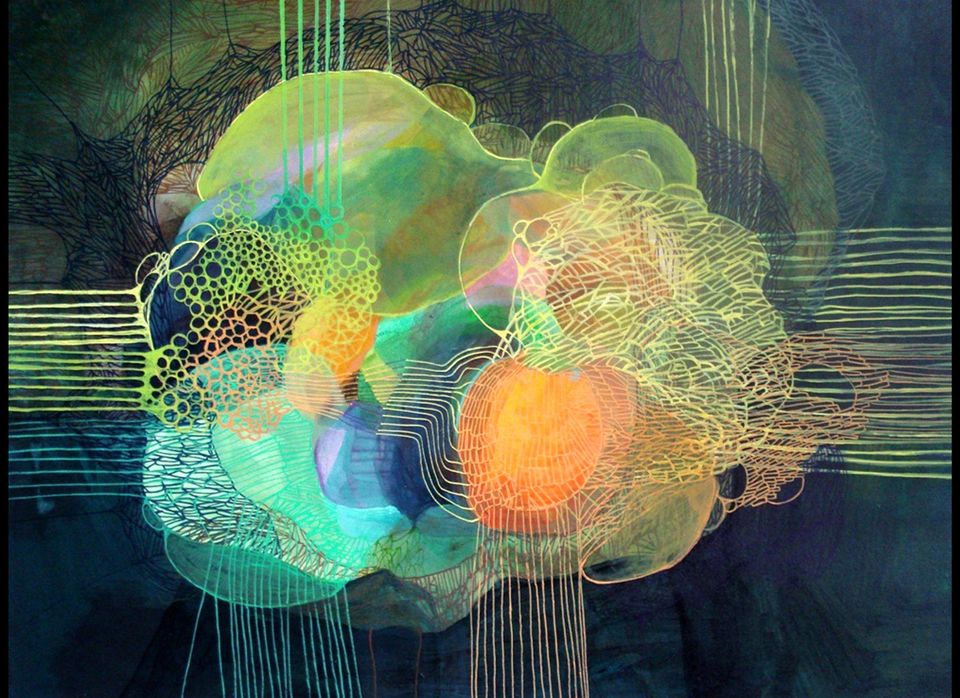