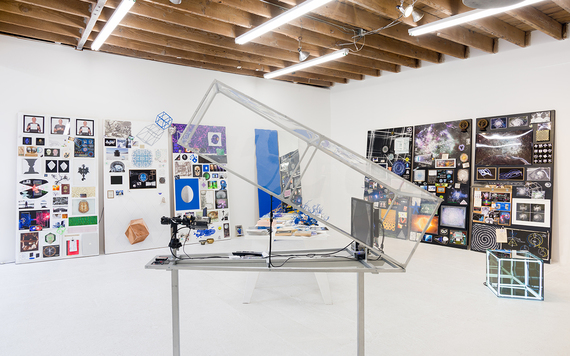 Marc Fichou is a French-born, L.A. based artist who consciously defies categorization. This playful defiance makes Fichou a free spirit in the art world who refuses to be limited by restrictive definitions of what it means to be an artist. As he says, "I do not want to be part of an art movement. I want to be detached and yet part of everything and not just one thing." His curiosity about parallels in philosophy, physics, nature and art makes Fichou's artwork life-like rather than art-like.

Fichou's installation, Outside-In, at Chimento Contemporary (June 4-July 9, 2016) is a playful mind game of making visual connections. Meticulously finished interactive sculptures - using video, photography and reflective materials - are surrounded by rough unfinished wall panels, "covered with networks of studies, experiments, information from [the] internet, books and notes produced by preparatory research and reflections on the creative process." (Fichou). These wall panels are like a work-in-progress found in an artist's studio - deliberately left open-ended for the viewer. Seen together, this vast array of visual devices and visual information has a coherence because it raises recurring questions about time, perception and identity.

Fichou is highly influenced by the French philosopher Henri-Louis Bergson, a Nobel Prize winner. Bergson is known for his conception of the present as a "duration" which can only be understood experientially, through intuition. Fichou creates interactive artworks to demonstrate Bergson's philosophy that we are always inside the present moment and inside the image we perceive -- and can never get outside the present or outside the image. Fichou calls this continuous creation "in-betweenness."

Throughout the installation Fichou's selfies appear, disappear and reappear. Initially, it feels as though we are entering the artist's mind but when his selfies disappear we are left with our own thoughts about the phantasmagoria we experience. Fichou does not impose an interpretive narrative; instead, he creates a self-reflective environment where questions do not admit the closure of an answer because it is the intuitive process of understanding visual perceptions that Fichou wants us to experience for ourselves.

Fichou uses engineering techniques he learned working in the music industry to construct interactive sculptures which require skillful accuracy to make the viewer part of the process of creating the artwork. In The Artist, Fichou uses a video feedback loop to project a machine-made image onto an LTD screen -- the same screen the camera is recording. The moving image is created by light which the feedback loop turns into a ripple, like a fractal with constantly changing geometric patterns. When the viewer puts their own hand in front of the screen, the image changes. The paradox of the title is that this image is not made by Fichou's hand at all because it is self generated by the machine and the viewer can use their own hand, like an artist, to change it. As Fichou says, "the eye is like a camera and the brain is like a video screen" in the continuous creation of life (recalling Bergson's "process philosophy.") 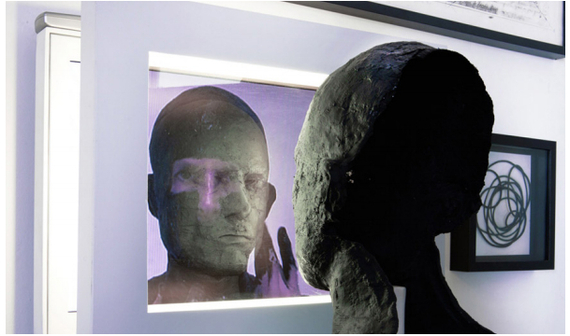 In Plastron, Fichou stages a plaster mask made from his own face in front of a video of his face during the process of fabricating the mask. The video images constantly change, while the mask is stationary in this play on duration. Finite and Infinite is a cube made of glass with a neon sculpture inside that resembles a construction which looks infinite when the viewer looks inside, although it is obviously finite viewed from the outside.

Fichou is known for his beautiful origami work which he incorporates into this installation on table displays and separate wall pieces. He photographs the origami and then unfolds it, printing the image of the folded origami onto the unfolded paper. This technique is a visual play on a 2-D frame of a 3-D object which continues his central theme of "in-betweenness".

This exhibition is designed to be fun for the viewer. Gallery owner Eva Chimento is known for her rapport with artists and eye for innovative exhibition design. This small space opened last September in the gallery row on South Anderson Street in DTLA. Chimento is gaining attention for putting 90s artists, who have fallen under the radar, back on the map.