Here's the Marc Jacobs item you never knew you never needed: a condom.

It even comes with a handwritten note that says: Remember, Safety First! xxoo, Marc Jacobs.

At the bargain basement "Buy It Now" price of $1.99, this makes for one cheap label splurge... If it's real, that is. (We make no guarantees.)

And we can't help but wonder what on earth would compel Marc Jacobs to design (?) a one-of-a-kind, cerulean blue, collector's condom. Do the proceeds go to charity?

We did a little research and found this post from June 13, 2007 and this one from September 2006, which links to eFashionhouse.com - which was presumably the online home for MJ's condom creations. 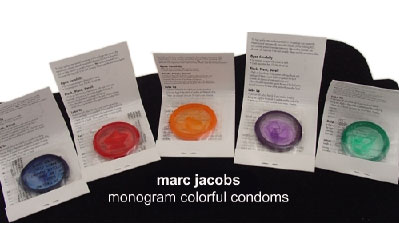 Looks like we have a winner. And it also looks like the condom business didn't bring Marc the business he expected. So: one-of-a-kind it is not. Collector's item? Maybe. After all, it does come with a handwritten note.

More:
StyleeBay
Newsletter Sign Up
An essential daily guide to achieving the good life
Subscribe to our lifestyle email.
Successfully Subscribed!
Realness delivered to your inbox