"The Amazing Spider-Man" is director Marc Webb's second movie. This is not a statement on Webb -- whose first film was the almost universally loved "(500) Days of Summer" -- or "The Amazing Spider-Man," but more of an example of how quickly things can escalate in Hollywood. Though, Webb's ascent to franchise director didn't come without some problems -- well, three to be exact: the number of other Spider-Man movies released since 2002.

Armed with a new cast that includes Andrew Garfield as Peter Parker and Emma Stone as Gwen Stacy, a surprisingly honest Webb discusses the challenges of bringing everyone's favorite webslinger to life -- especially so soon after Sam Raimi's trilogy -- and reveals the one aspect of the original series of films that he refused to recreate.

I was disappointed that Han Solo didn't make an appearance like he did in "(500) Days of Summer."
I tried! They wouldn't let us. You know, in "(500) Days of Summer" with Han Solo, it's a Fox movie. And originally that was written as Paul Newman, I think. And I thought a little bit more about who my touchstone for cool was. And it was Han Solo.

Could that be a recurring theme for you?
I don't know where we could put in Han Solo in this.

It would have been odd to see Han winking at Peter in a reflection.
[Laughs] I'll put some thought into that.

Speaking of Harrison Ford, at one point Peter uses his web to lasso Gwen back for their first kiss. That seemed very reminiscent of "Indiana Jones and the Temple of Doom."
Maybe subconsciously. It wasn't a deliberate homage, but I was just thinking of what he would do. It's a loaded moment, you know? He's revealing himself so you want to dramatize that rather than just him saying something. And it was a way that kind of made sense. It's good that you picked that up!

I remember during press for "(500) Days," there were rumors that you were going to direct "The A-Team." How did that turn into "The Amazing Spider-Man"?
I owe a movie to Fox -- I have an optional movie with them and I really look forward to working with them again. And they had "The A-Team" and there was some preliminary discussions. But the problem was that in "(500) Days of Summer" we were going to use "The A-Team" theme song instead of the "Knight Rider" theme song, but they wouldn't let us use "The A-Team" because they were making a movie. Then they were like, "Hey, do you want to consider directing it?" Joe Carnahan eventually directed and I'm sure they made the right choice, but that's where that came from.

"(500) Days" is a movie that's well liked and you had a lot of good will from that film. "Spider-Man" comes with a lot of baggage. Would you have liked at least one more smaller film before directing a summer blockbuster?
You know, I am a risk taker by nature. And I remember that I was working on some things and this came about and I knew it wasn't going to last forever, that opportunity. And I was a Spider-Man fan; a Peter Parker fan. The kid in me was like, Are you kidding? Would you pass this up?

That's a tough offer to say "no" to.
Yeah, the other thing is that I thought about other movies. You know, "Harry Potter" is closed canon -- it's seven books and you can only create so many things. "Spider-Man" has been around for 50 years and there are so many stories to tell and so many nuances and connections to make. If anything, I was overwhelmed by the amount of material on which to draw. Going back to the beginning, we've seen the origin of Spider-Man, but we haven't seen the origin of Peter Parker. I was really interested in opening that page, that chapter of the story. But I felt like this Peter Parker was different -- being left behind by your parents would be such a massive event in someone's life. It's going to define the character and that hadn't been explored before.

I have heard rumors that you wanted Peter's parents to be the source of his powers, not the traditional accidental radioactive spider bite. There are rumors of a reshoot to incorporate the more traditional spider bite.
I think there was something on the internet.

I want to clear that up.
It's completely false.

So what we see is the way it was always shot?
Yes.

And the parents will be a theme of the trilogy?
Yeah, it's the long shadow that's cast over his life.

Well, Campbell Scott is cast as Peter's father. He's a good actor, so I can't help but assume we haven't seen the last of him.
Ha, ha. Interesting. Yeah, when I think about the story, I think of a kid who goes out looking for his father and finds himself. But the circumstances around his parents disappearing from the plane crash and all that is an ongoing history.

I feel this Peter is more reckless than the one that Tobey Maguire played.
Yeah, it's a really interesting point. I feel he needs to learn those lessons in a profound way. There is something about being a teenager. And when I was talking to Stan Lee very early on, we were talking about what makes Peter Parker Peter Parker. He's different than a more polished, perfect hero. And one of the great things about Peter Parker is that imperfection.

In a perfect world, selfishly, would you rather that other series of Spider-Man movies not exist?
Oh, no. No. It's something I thought about early on and it's an important and good question to ask. But, I love those movies. I love what Sam Raimi did in that.

But not as a fan. As a director trying to make a good movie, would it have been easier if those weren't there? What if you had a great idea, but couldn't go there because it was territory already covered?
[Pauses] But that goes way beyond just Spider-Man. Superhero movies are such a big, expansive genre. And that goes well beyond any Spider-Man movie. It could be Batman or Captain America -- any of those things. That's the real challenge.

Does it help that "Spider-Man 3" is almost universally despised?
Well, I don't know if it was universally despised. It did incredibly well at the box-office. I think that they finished that story and that really doesn't enter into my equation of things. Again, in the comics, there are so many stories and characters to explore. And that was the genesis of it. It wasn't about dodging what happened before. In a way, he was more born to be on screen than he was for the comics. And the possibility of doing it in 3D and using the new technology ...

Which looked great.
Thank you. And, yeah, I wanted to see if I could create that sensation of flight, swinging through the air. Because 3D was in vogue for a minute, then everyone hated it. But, I think there's something organic about the connection between Spider-Man and 3D.

What do you want to do next?
I don't know. You know, I want to finish this up and go to a beach and think about the future.

What does that mean?
Well, it's a long ... People ask about the sequel and I'm like, "Well, you know, I don't know if I want to do that, but I love the process." I love Andrew and Emma. But it's like asking someone who has just given birth, "Do you want to get pregnant again?"

That's a good point. You could have done two more "(500) Days"-type movies in the time you've done this.
Yeah, but there's something about the challenge that's so interesting, I was just curious.

There's a scene in which Peter picks up a copy of The Daily Bugle, though we never meet J. Jonah Jameson.
OK, that's the one thing from the previous movies. He was such a bombastic character, it would have been difficult.

You should just get him again.
He's so fantastic. I used to see J.K. Simmons -- my mom is from Montana -- at the Big Fork Summer Playhouse where he used to perform. I was like eight or nine years old, I saw him on stage as this local Montana actor. So, I remembered him! I look back at my little program, which I collected and I was obsessed with. So, I've had this connection and fascination with him, but I've never met him. I think it would have been just impossible for anybody to reinvent that.

Whether you come back for the next one or not, how do you solve that problem?
I think The Daily Bugle is a really important part of Peter Parker's universe. That bridge will have to be crossed.

You mentioned that Peter has to learn his lessons in a profound way. For people who know Gwen Stacy's fate in the comics, is that what you're alluding to?
Um, that's interesting. You know, I am a huge fan of the Gwen Stacy saga in the comics. I think it's one of the more interesting and controversial storylines -- certainly in Spider-Man and really in all comics. And I think one of the reasons that it was interesting to tell Gwen Stacy is because of that element. But, of course, you need to establish that connection. And we'll see [raising and lowering eyebrows] how that unfolds. 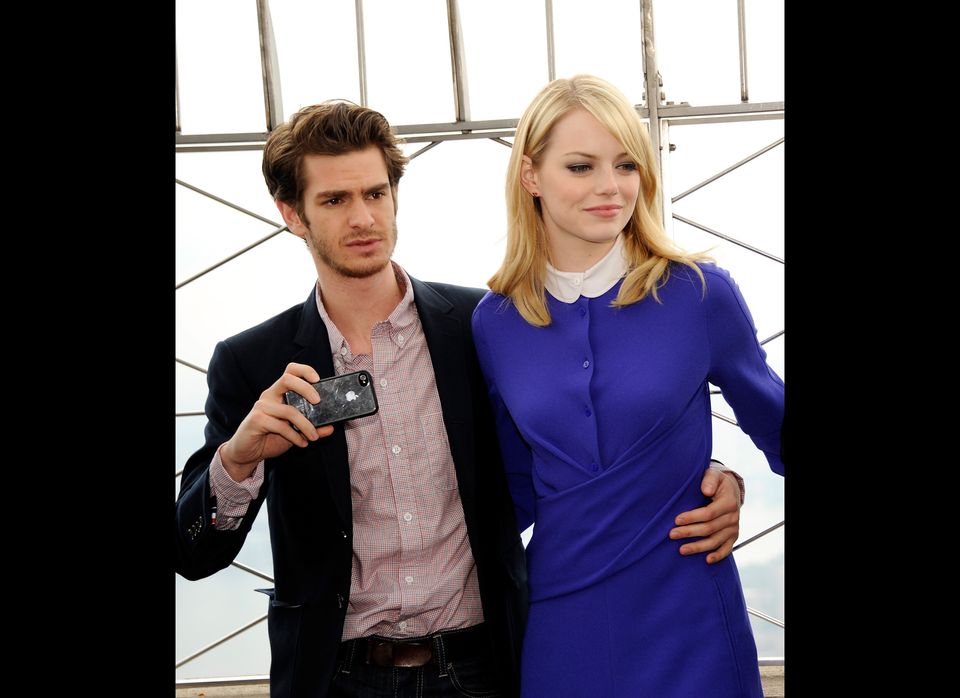