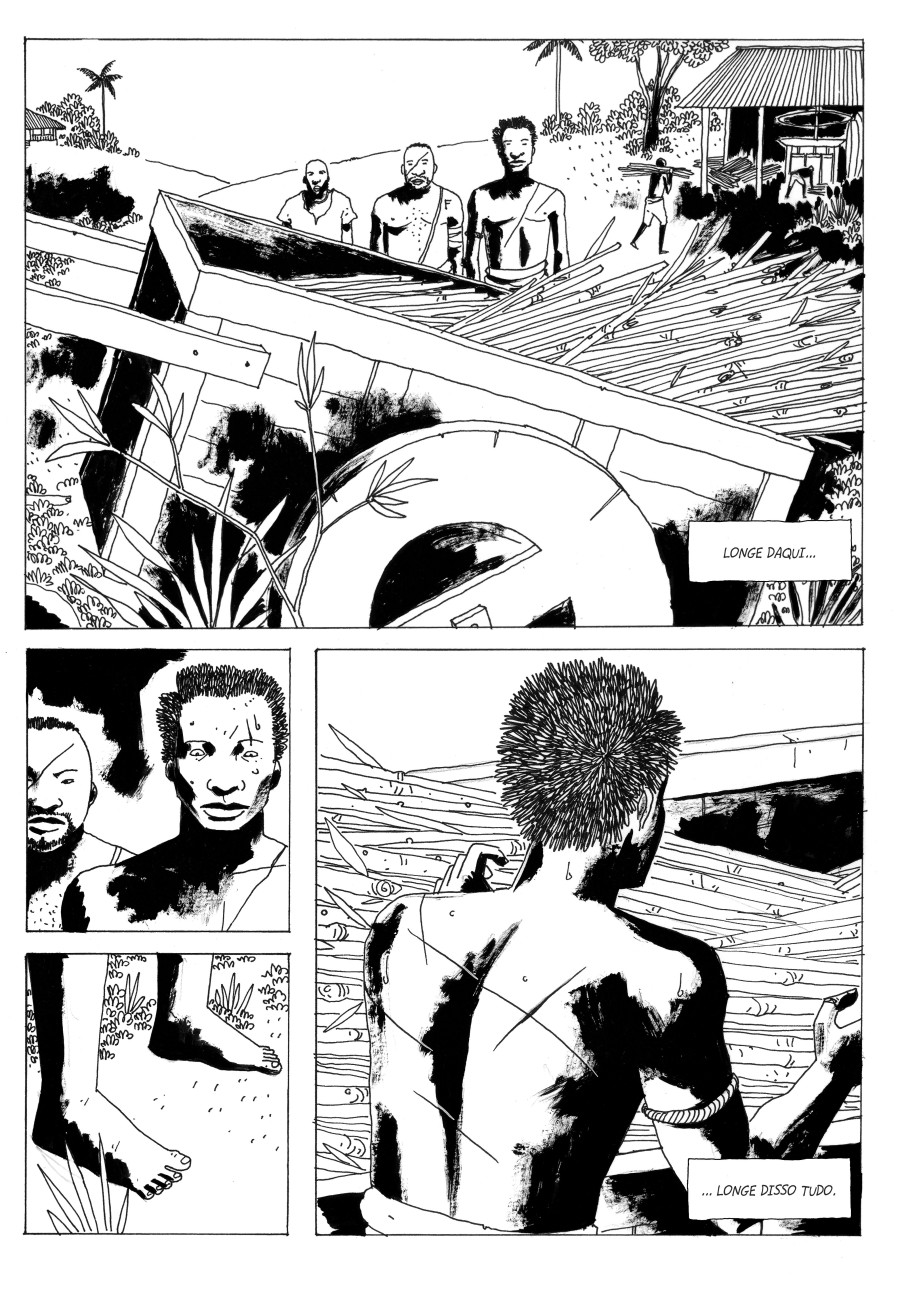 Not all slave rebellions made it into the history books. This is one of the main messages communicated by artist Marcelo d’Salete in his historical graphic novel, Cumbe.

"The scars caused by slavery are still poorly understood and discussed," the artist explained in an email to The Huffington Post. "Brazil is an extremely unequal, racist country, and this is closely related to its past. We can't continue to consider slavery as something soft in our history." 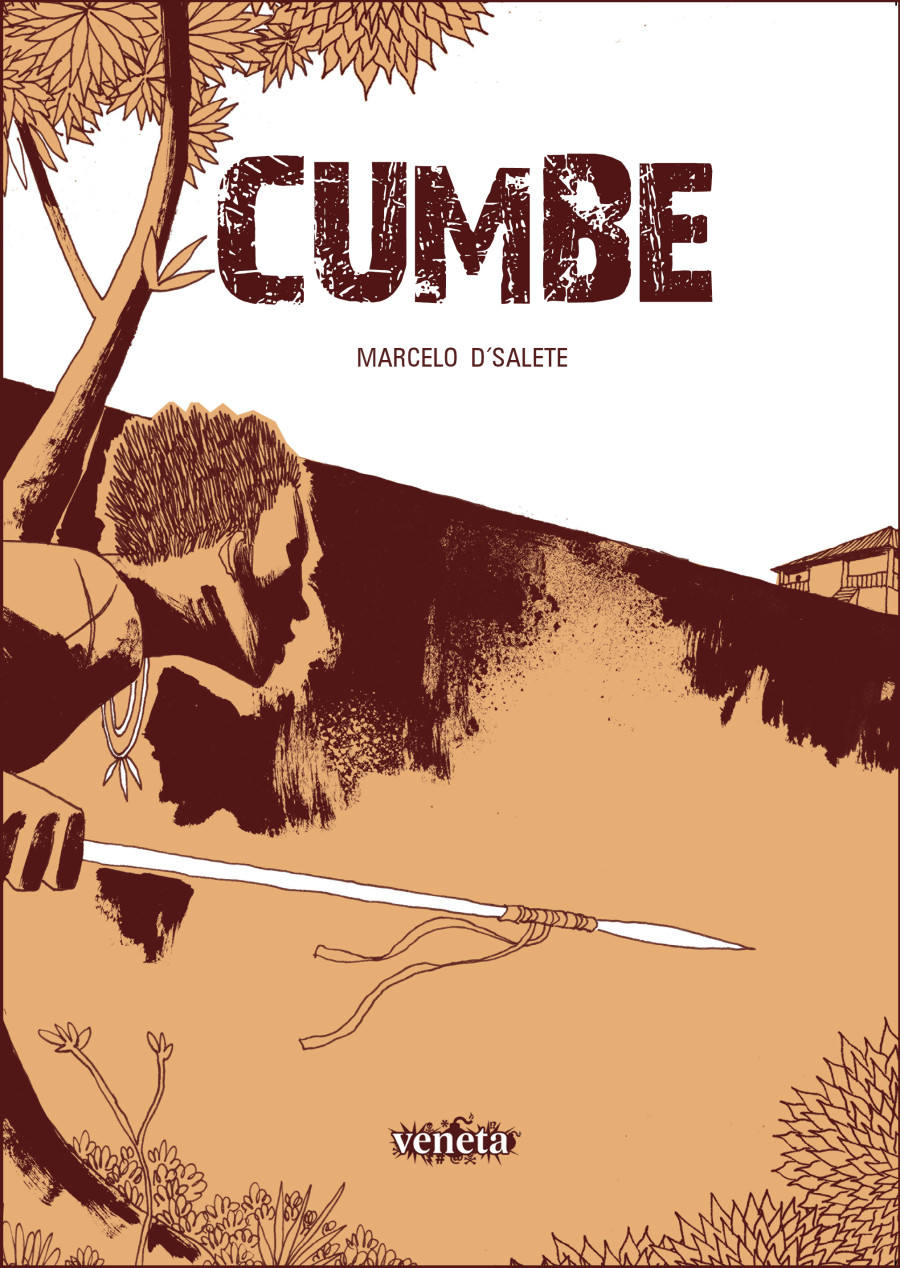 Today, Afro-Brazilians make up approximately 53 percent of the Brazilian population, with around 106 million individuals, according to a recent article in The New York Times. In fact, Brazil has the largest black population outside of Africa. However, the country still faces rampant racism, leading to disturbing statistics including the fact that black Brazilian teenagers are almost three times more likely to be the victims of murder than their white counterparts, and almost 70 percent of people living in extreme poverty in Brazil are black.

Much of today's racism stems back to the 16th century and the 300 years that followed, in which five million slaves were shipped to Brazil from Africa. (That's around 11 times more people than were sent to to North America.) Slavery was abolished in 1888, yet black Brazilians are still forced to live on the outskirts of society in a country that many argue is in denial regarding its racial prejudice.

To address Brazil's dark and hushed history, d'Salete crafted a searing and personal account of enslaved Bantu peoples, revealed in vivid black-and-white illustrations. Even more radical than the novel's subject matter is the fact that the story is told through the perspective of the victims, most likely for the very first time. 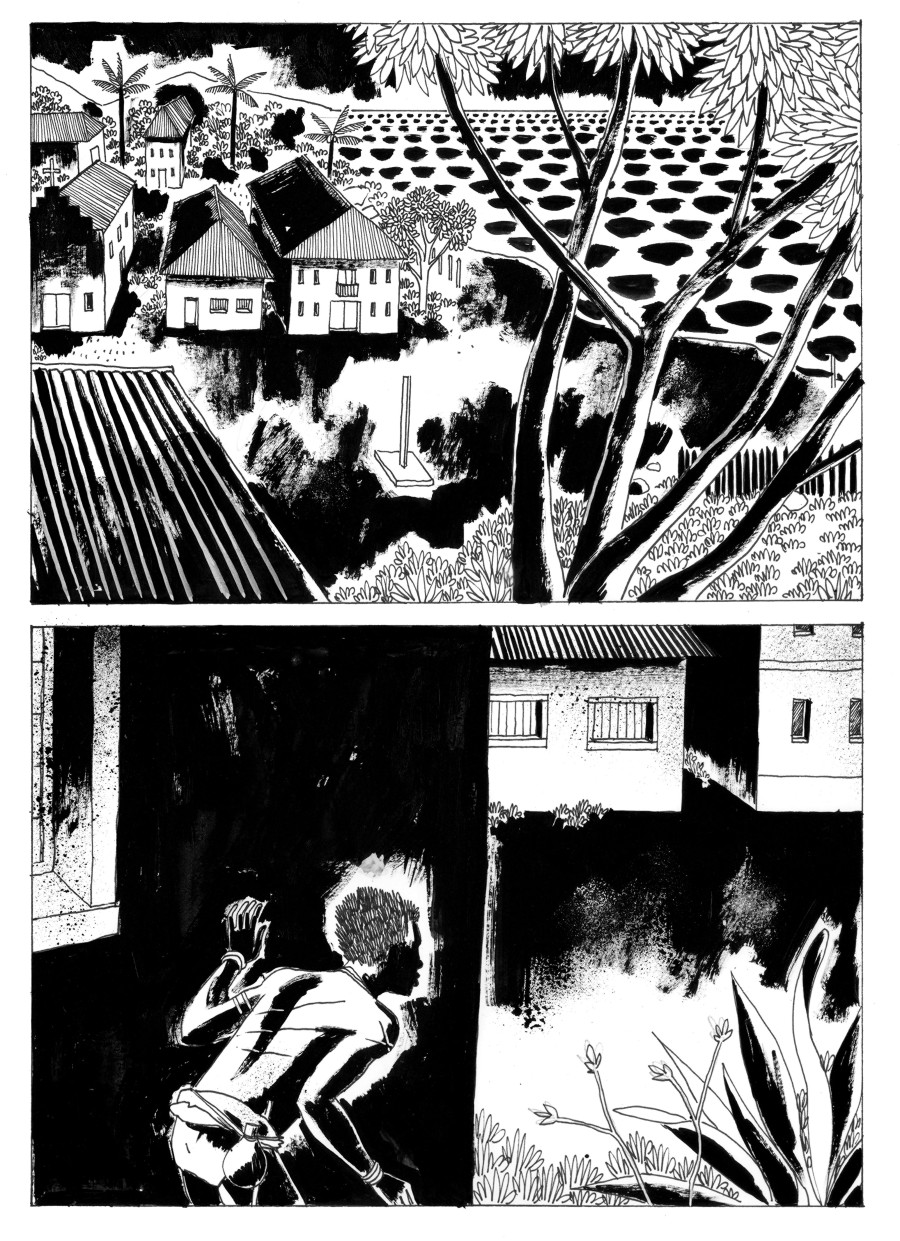 D'Salete is an illustrator, professor and historical author whose previous works include 2008's Night Light and 2011's Crossroads, which explore the stereotypes projected upon and endured by black Brazilians. For Cumbe, d'Salete digs deeper into the past struggles of the black Brazilian people, using an unconventional format to access the most devastating of stories.

"More than quantitative data, my intention was to speak from the perspective of enslaved Africans in the period and address the modes of resistance of these people. From the most individual way to the forms of collective struggle. There are few such stories in comic format that tried to address this in a very personal way."

The project began in 2006, as d'Salete culled primary and secondary sources that brought the issues of colonial Brazil to life, namely those of Bantu Africans. For the next three years, the artist created a written and visual fictional narrative from the perspective of one such Bantu individual, providing a first person account of a time primarily documented by white men. As d'Salete explained: "We need fiction to try to overcome these limits and create new reading possibilities." 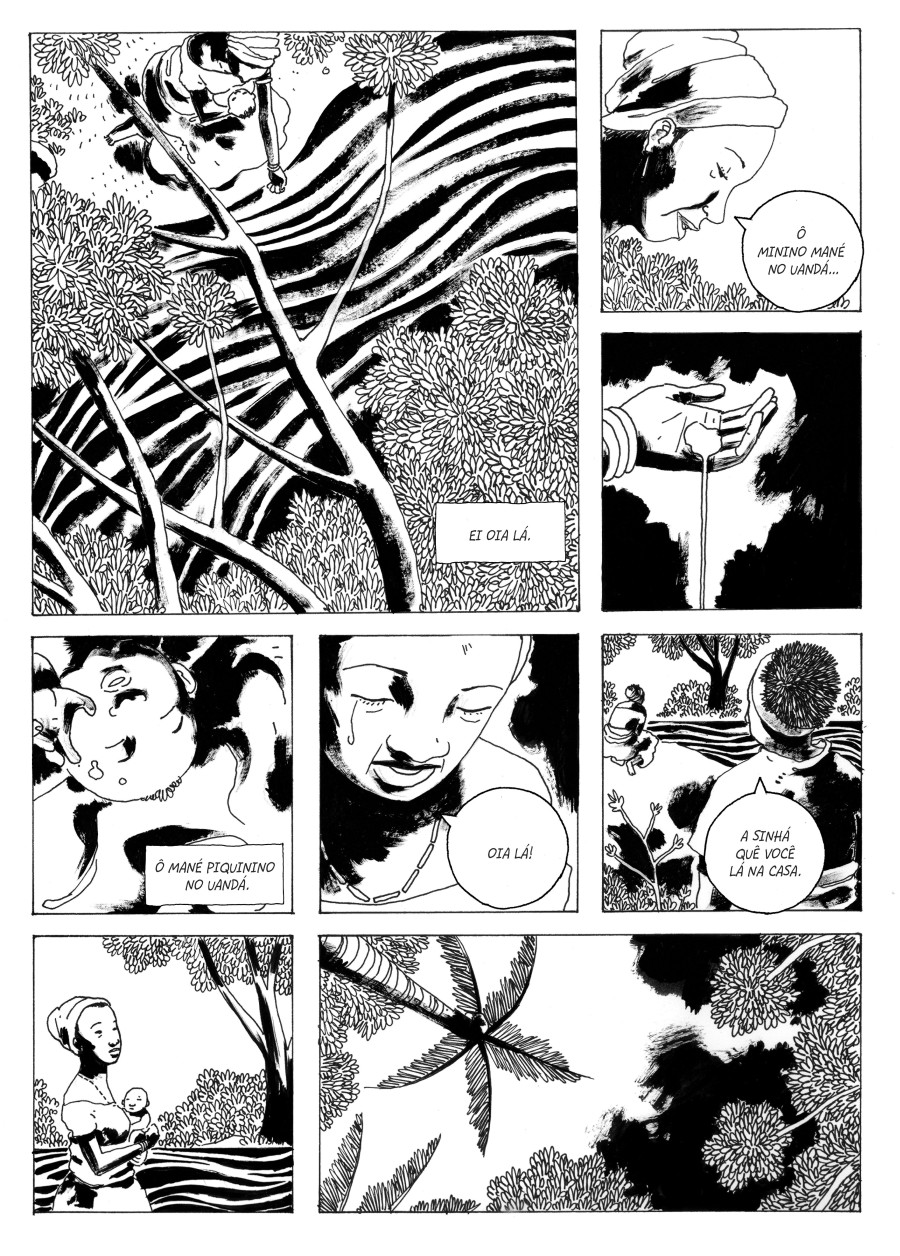 The book is divided into five parts, each telling a story of a slave rebelling against his or her master. Factual elements are juxtaposed with fantastical imagery and hallucinatory details, depicting the powers of the mind to prevail even as the body suffers.

As Hyperallergic explains: "In 'Calunga,' a mistreated slave drowns while attempting to escape a sugar plantation; as he sinks to the ocean floor, he has a stirring romantic vision of his lover. In 'Sumidouro,' a female slave experiences a similarly moving hallucination of her dead baby, killed by the master’s mad wife." The stories paint a nightmarish portrait of Bantu life, in which reality becomes more horrific than a dream ever could.

D'Salete's bold and graphic journey reveals that even if artistic expression can't change the past, it can certainly convey it in a new, more accurate and generative light. "My intention in Cumbe is to generate new ways of understanding the past of African slaves in Brazil."

See excerpts from the book below:

In the tradition of graphic novelists working to pen stories that are more true-to-life than lost-in-space, Anya Ulinich penned Lena Finkle's Magic Barrel, a graphic novel that explores the difficulties of dating as a single mother. Lena's perusing of OkCupid profiles lends itself well to the paneled form, and is hilarious to boot. But Ulinich's work is more than funny; she's able to show on a single page the range of emotions, from exhaustion to pride, that single mothers feel on a daily basis.

Read an excerpt from Lena Finkle's Magic Barrel.
Jillian Tamaki makes illustrations for The New Yorker and The New York Times, but she also writes wonderful webcomics. Her SuperMutant Magic Academy, which is as whimsical as it sounds, will be collected into a book this spring. She's also the co-author of This One Summer, a graphic novel she created with her sister, who's written about the necessity of more female protagonists with less-than-perfect bodies.

Read a blog by Mariko Tamaki.
Leah Hayes's debut graphic novel is innovative not only stylistically (the entire monochromatic book was created using a scratchboard technique), but also in the narrative style it employs. Funeral of the Heart is a short story collection, and each story imbues realistic stories with a touch of the fantastical.
Advertisement
Hope Larson works in an impressively wide variety of mediums. She's adapted the classic sci-fi book A Wrinkle in Time into a graphic novel, she's written and directed an animated short film, and you can read her serialized web comic SOLO online for free. We recommend starting there -- the series even has its own soundtrack!

Read a blog by Hope Larson.
Yumi Sakugawa's books are meditative practices, both for her to create and for audiences to enjoy. Her first book, I Think I'm n Friend Love With You, is a social commentary on platonic friendships in the social media era. Her more recent work, Your Illustrated Guide to Being One With The Universe, is a self-help book of sorts -- but Sakugawa uses it also as an opportunity to slyly subvert the conventions of self-help. Rather than outlining rigid steps to improvement, she uses fluid lines and a fluid narrative to suggest change isn't always a straightforward quest.

Read an excerpt from Your Illustrated Guide to Being One with the Universe.
Lucy Knisley's work puts fits neatly into the "realistic graphic novel" realm, but she puts a spin on the sub-genre by mixing in photography for a unique yet simple multimedia reading experience. Her stories are different, too -- they're lighthearted graphic memoirs, and the stories are quietly touching. In French Milk, Lucy recalls a trip to Paris with her mother; in An Age of License she logs her travels to Scandinavia.
Advertisement
Okay, the term "graphic novelist" may be nebulous -- it's safest to stick with how comic artists label themselves individually, and Roz Chast is a self-described cartoonist. Her work runs often in The New Yorker, but her 2014 memoir, Can't We Talk About Something More Pleasant?, won a boatload of nonfiction awards, including a National Book Award nomination. Because of the narrative nature of the story, we're going to include it as one of many great works by graphic storytellers. The book centers on the heart-wrenching topic of aging, adding to the topic the personal touch of losing one's own parents. It's funny, touching, and a must-read if you're interested in the genre of cartoons that tell real, sometimes gritty stories.
Fiona Staple's badass comic series Saga is reason enough to get on board with her work. It's a blend of sci-fi and fantasy, starring star-crossed lovers from different worlds. She's also done the illustrations for a number of graphic novels, including 2010's North 40, a Western-style fantasy.
Faith Erin Hicks's Adventures of Superhero Girl directly confronts the industry's lack of feminine superheroes, AND it's a refreshingly down-to-earth story. Its heroine must tackle life's annoyances as often as she saves the world. Another of her works -- Friends with Boys -- tackles gender in an entirely different way. Protagonist Maggie's social life centers on her friendships with her three brothers, until she enters the daunting world of public school.
Advertisement