NEW YORK -- A march from New York City to Washington, D.C., to protest police brutality started Monday morning in Staten Island -- the borough where Eric Garner died last summer after being put into a chokehold by a New York police officer.

About 100 protesters gathered at the foot of the Outerbridge Crossing in preparation for the nine-day, 250-mile trek. Many wore T-shirts bearing Garner’s famous last words, “I can’t breathe,” and others held signs reading "#BlackLivesMatter."

Sade Swift, a 19-year-old New School student, told The Huffington Post she was marching because she’s “tired of creating hashtags” for unarmed men of color killed by the police: #EricGarner. #MichaelBrown. #RamarleyGraham. #TamirRice. #AkaiGurley. And, most recently, #WalterScott.

“I’m tired of seeing all these people that look like me on the news, so that’s why I’m marching,” said Swift, who grew up in Washington Heights, where she says cops often stopped her on the street.

“I was stopped and frisked multiple times because they thought I was a prostitute,” she recalled. “I was 16 years old going to church with a pea coat on.” 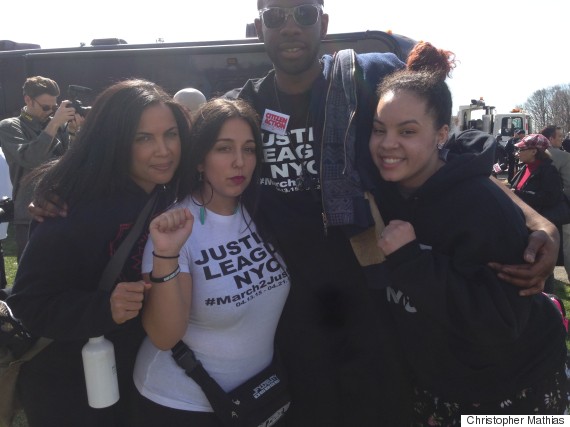 Swift is a member of The Justice League, the New York-based organization behind the event, dubbed “The March 2 Justice.” About 100 protesters are making the entire journey, spokeswoman Lindsey Wagner told HuffPost, and others will join in for different legs of the trip along the way.

NYPD and Port Authority officers closed off the Outerbridge Crossing for an hour Monday morning so protesters could march across the Hudson into New Jersey, then turn north to Newark, where they’ll spend the night in a church. They will then head south to Washington. March director Carmen Perez told HuffPost the protesters plan to stay in churches every night along the I-95 corridor until they arrive in the nation’s capitol. Fellow activists along the route will provide food and water supplies.

Among the marchers Monday morning was New York city council member Jumaane Williams, who gave a rousing speech to protesters before the march started.

.@JumaaneWilliams: "The next generation is saying please leave the world better than you found it!" #March2Justice pic.twitter.com/6lVAqxFEm8

Williams told HuffPost that recent videos -- including the one showing 50-year-old Walter Scott being gunned down last week by officer Michael Slager in North Charleston, South Carolina -- are making people “who may have been on the sidelines” start to take action.

“Each video’s getting worse,” Williams said, adding that “without the camera, justice would’ve definitely been denied” in Scott's death. The video in that case has led to murder charges being filed against the police officer.

Williams was one of a handful of politicians, including city councilwoman Debi Rose, former New York City Comptroller John Liu and state Senator Gustavo Rivera, who joined in Monday’s march.

A man and his daughter come out to give us water in New Jersey. #March2Justice pic.twitter.com/Ocvqu4nthp

Perez, the Justice League march director, told HuffPost that when the protest ends in Washington on April 21, organizers will hold a rally on the National Mall with musical performances.

“We want to shed light on the injustices that are happening in different communities, particularly around police brutality, and the mass incarceration of our black and brown communities,” Perez said.

The Justice League is pushing for the passage of three federal bills during the march: the Juvenile Justice and Delinquency Prevention Act, which would create funding to improve conditions in local and state juvenile justice programs; the End Racial Profiling Act, which would prohibit police from profiling anyone based on their race, ethnicity or national origin; and the Militarization Bill, which would limit police departments’ ability to purchase military equipment from the Department of Defense.

After the protesters hold their rally in Washington next week, Perez said, the “next day we’ll put on our suits and we’ll have informational sessions with Congress.”