There's no shortage of advice online about the best time to list, and it all goes something like this: The majority of home sales occur when the weather heats up, and homes sold during this time of year tend to attract high prices. Conventional wisdom tells us it's best to list early in the year. That way, you're sure to benefit from the June peak in sales, and the premium pricing during the summer months as well. List too late, we're warned, and you could miss this warm weather bump.

At first blush, this conventional wisdom seems particularly wise. After all, there's one thing that all homeowners looking to sell have in common -- they want to do so as quickly as possible, and for as much money as possible. Listing early, in theory, means more buyers looking to buy, and therefore a better chance of closing faster and for a good price.

But when you stop and think about it, this advice is rather imprecise -- almost unhelpfully so. "Early in the year" could mean January 1, or April 30, or any date in between.

Until recently, there was simply no way to crunch the numbers to determine the most advantageous moment for homeowners to put their property on the market. This isn't because economists hadn't figured out the right method of analysis. Rather, economists hadn't had access to all the relevant data.

It all comes down to supply and demand. In order to identify the window when sellers have the best shot at selling quickly for the most money, you need good data on four important questions:

When are buyers looking to buy?

When are sellers looking to sell?

When are these listings and sales taking place?

Did the sale under-perform or over-perform?

For the first time, the answers to all these questions exist in the same place, readily available to consumers, and we can finally answer that simple question on every home seller's mind, the one that no one has been able to precisely answer until now:

When prospective buyers start contacting agents, it is a clear indication they are getting serious about house-hunting. Sure enough, analyzing Zillow's Web traffic, we can see that spike in agent inquiries translate into actual home sales. After the April spike in agent contacts, sales reach their highest levels nationwide just nine weeks later, at the end of June. 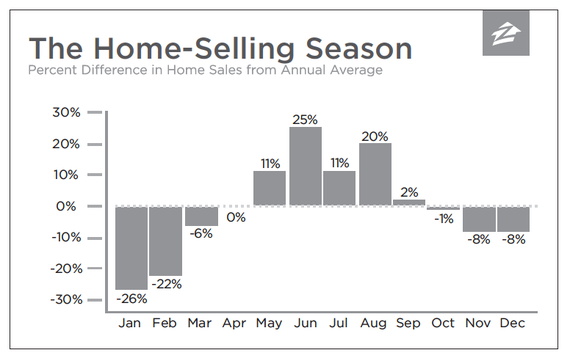 The conventional wisdom that sellers should list early in the year is spot-on. But what does "early" mean? Is there such a thing as too early? Is there a sweet spot for listing your home so that it has the best chance of selling fast and for more money? Is there a measurable impact if you list before or after the peak?

The answer to all of these questions is a resounding yes. Our analysis shows that listing too early or too late does result in more time on the market and a lower sale price. There is a sweet spot when sellers should list, and hitting it can pay off to the tune of thousands of dollars.

Here's what we can tell from analyzing four million homes that were listed on Zillow. Most sellers, perhaps unsurprisingly, follow the conventional wisdom. There is a large spike in newly listed homes "early in the year," and specifically between the third week in February and the beginning of March. The sellers who list in the late winter are clearly trying to position themselves to take advantage of the strong spring and summer demand. Then again, with all these new listings popping up at once, there are a lot of options for buyers, as well as a lot of competition for sellers.

But the data gives us more than just an interesting picture of supply and demand. It also tells us how long it takes every single listing to sell, how the sale price of each listing compares to the estimated home value at the time it was listed, and what kind of homes are on the market at any given time. That means we can pinpoint not just the season, but also the exact weeks when it's most opportune for sellers to list their homes.

Our analysis of the data shows that homes listed in the last weeks of March sold the fastest and for the most money. Interestingly, these "magic weeks" came before the peak in agent contacts (May and June), but just after the peak in newly listed homes (late February and early March). Our analysis showed that these high-performing, late-March listings didn't get lost in the sea of other new listings. Just the opposite.

Sure, there were more listings for buyers to look through after the peak in new listings, but the very newest listings -- those posted after the peak, at the end of March -- appeared at the top of the search results for prospective buyers who sort by listing date. Many buyers have already sifted through the available listings several times before they start getting serious about buying. By that point, those older listings will start looking stale, while these relatively new listings stand out from the pack and receive more attention, more offers, and more money as a result.

In 2011 and 2012 sellers who listed at the end of March didn't just sell faster than average. They sold for over two percent more than the average listing. Nationally, that translated into a premium worth more than four thousand dollars over the estimated value!

Of course, you don't sell your home nationally; you sell in your local market, and your competition is other homes in the immediate vicinity. This is an important consideration because, in some metro areas, the difference in sale price between listing during the peak and hitting the sweet spot just afterward can be significant.

In Atlanta, for instance, the best week to list in 2011 was the third week in March. That same year in Boston, however, sellers had the best outcomes when they listed in the second week of April.

Despite regional, largely weather-driven variations, wherever you live, if you're selling your home, make sure you list after the first major influx of new listings for the year.

Put your home on the market after you fill out your NCAA March Madness basketball brackets, but before someone slips on an ivy-green jacket at the Masters Golf Tournament at Augusta National.

Maybe you're thinking that all this sounds impossible. Perhaps you're dubious about these "magic weeks" when listing your home can help you sell fast for top dollar. Well, there is a caveat here. These favorable windows aren't set in stone. They can and will shift each year, according to when new listings and agent contacts peak. Those factors can fluctuate depending on weather patterns. 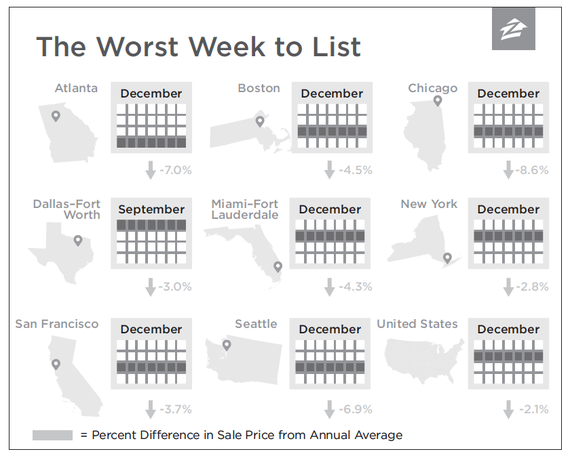 While you can't predict these moments of opportunity, you can detect them. At the beginning of the home sales season, keep your eye on new listings in the neighborhood where you're selling your home. Monitor them as they ramp up and, most importantly, take note when they begin to slow down. That's when you know the time has come to put your home on the market.

This is a condensed excerpt from Zillow Talk: The New Rules of Real Estate by Spencer Rascoff and Stan Humphries. Published by Grand Central Publishing in January 2015, it is available at bookstores and online at zillow.com.