A long walk to freedom may be the name of Nelson Mandela's epic journey to a more racially unified country, but the title is equally fitting for the 13 members of the Brooklyn chapter of the Congress Of Racial Equality (CORE) who literally marched to Washington in the summer of 1963.

Among them, Lawrence Cumberbatch, my uncle, who at age 16 was the youngest member of the group.

Their route, from Brooklyn, New York, to the steps of the Lincoln Memorial, right behind Dr. Martin Luther King, Jr. as he gave his iconic "I Have a Dream" speech, is one I've heard recounted over many family dinners. And like the wine that's often accompanied it, the story has only gotten better with age.

This week it turns 50, along with the speeches and the memories of the nearly 250,000 March On Washington attendees who also witnessed it firsthand.

Here, Lawrence Cumberbatch revisits his unforgettable campaign once again, poring over newspaper clippings and the handwritten notes he compiled over the 13-day, 240-mile trek.

I was 16 in the summer of 1963 and I started going to the Brooklyn CORE office on Nostrand Ave., down by Lexington. They were having demonstrations about jobs.

I had worked before, for the Board of Education as a helper for the programs that they ran in the summer. I did that for one or two summers, but prior to that, I was just a kid, so I stayed home and went out in the street and played like everybody else.

In the summer of '63, Brooklyn CORE was picketing the construction jobs for Downstate Hospital on Lenox Road in Brooklyn, because the State University (who ran the hospital) were building a dormitory for medical students and we weren’t getting any of the construction work. I’d go down to the picket line every day, spend four to five hours and then head back to the CORE office where we would discuss what we were going to do the next day and on [different issues]. Before the season ended, Brooklyn CORE decided to go to the March on Washington by walking.

We were the only ones that walked.

If you look at the newspapers at that time, there were two different issues prompting people to go to Washington. We were interested in jobs, that’s what our focus was, it was not about “we’re going to all be friends.” It was about people getting a fair shake. That’s what guided us.

We left at 5:30 a.m. on Thursday, August 15 from Downstate, where we’d spent a whole summer picketing. 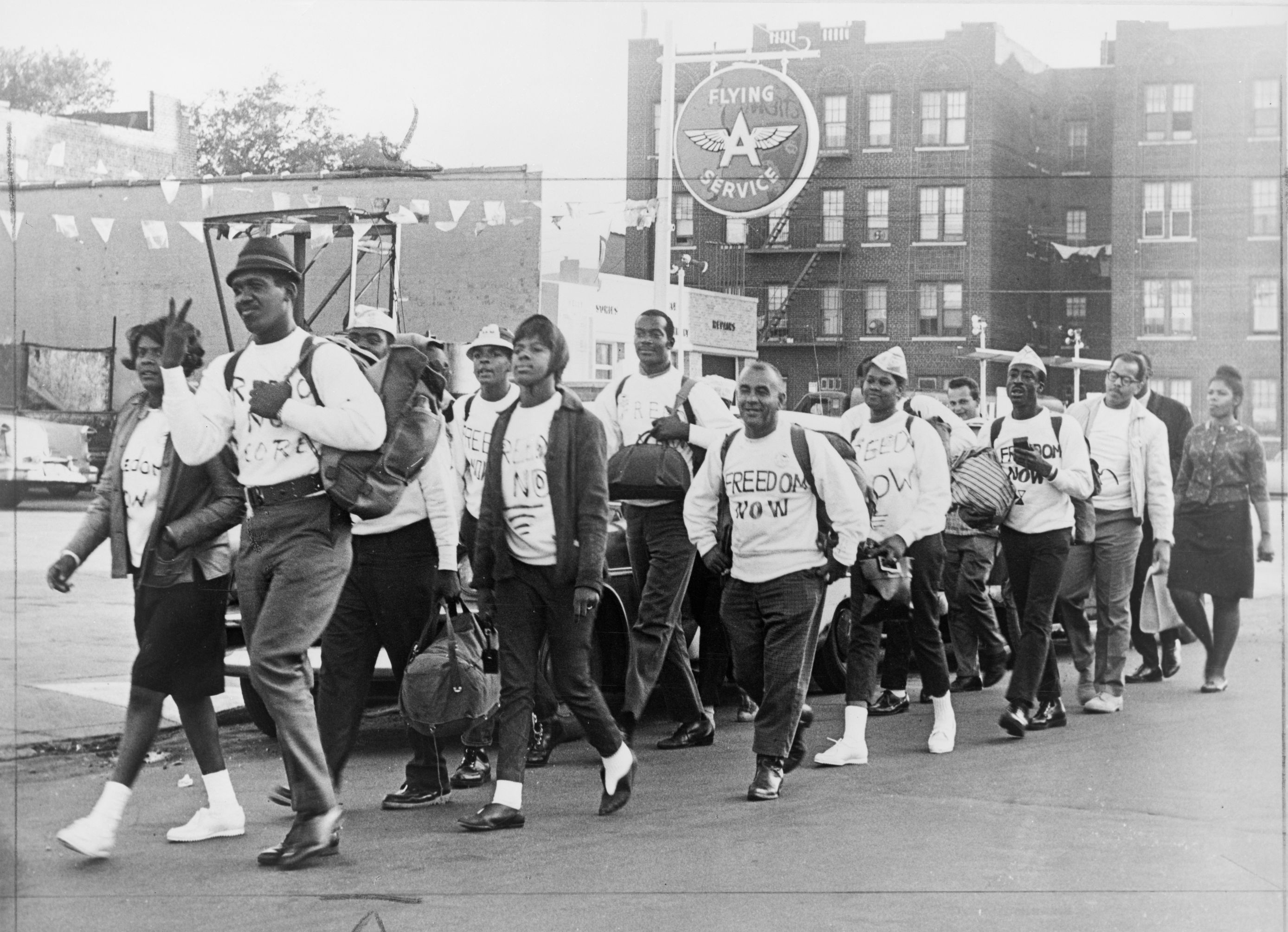 CORE members swing down Fort Hamilton Parkway in Brooklyn, toward the 69th St. ferry on trek to Washington. Lawrence Cumberbatch is seen five people back wearing a red-and-white hat. Photo: Library of Congress

The group decided that we’d need a scout car to find places for us to sleep at night. Because we weren’t staying in any motels or hotels, we would actually camp out. We had a car that would go along the route each day and tell us where we could put up our tents for the night.

The Friday after we left, someone stopped on the side of the road and gave us a $20 contribution to help with our campsite.

One night, we found a spot to camp, but it was pitch black and we had a really hard time getting the tent stakes into the ground. We ditched the tents and spent the night with only our sleeping bags, only to wake up in the morning and realize that we'd camped out in the parking lot of a supermarket!

We had problems with which state and federal highways we could use. We couldn’t walk on the turnpike or any of the interstate facilities, so we had to find another route. We ended up taking the local roads, Route 1, which was there for half a century before any of this took place, so it wasn’t a part of the interstate system at that point.

When we got to Delaware, we were met at the state line, because it was broadcast ahead of time where we were going. The state troopers met us and told us that we would not be allowed to stop and sleep or camp anywhere in Delaware. We had to walk through the state in one day. It was 30 miles or so that we were escorted by the state police until we left the jurisdiction of Delaware.

We basically lived off of packaged cookies that you get out of machines and stores along the route. Whatever funds were involved came out of Brooklyn CORE for gas for the cars; otherwise, there was no other money involved except what each of us had in our pockets.

Very few people honked at us. There were people who would drive by and call us niggers, but that was far and few between. Most of the time, people would wave at us, because we wore sweatshirts that had “Brooklyn CORE March to Washington” on it, so people knew what we were doing. One or two times, people would skirt toward the highway as if they were going to run us over. But other than that, we had people who would come up and offer us money or food or go to the store for us. The public treated us okay; there was no real problem. A lot of people would wave at us and tell us good luck. Overall, it was a good, uneventful trip in terms of the walking. 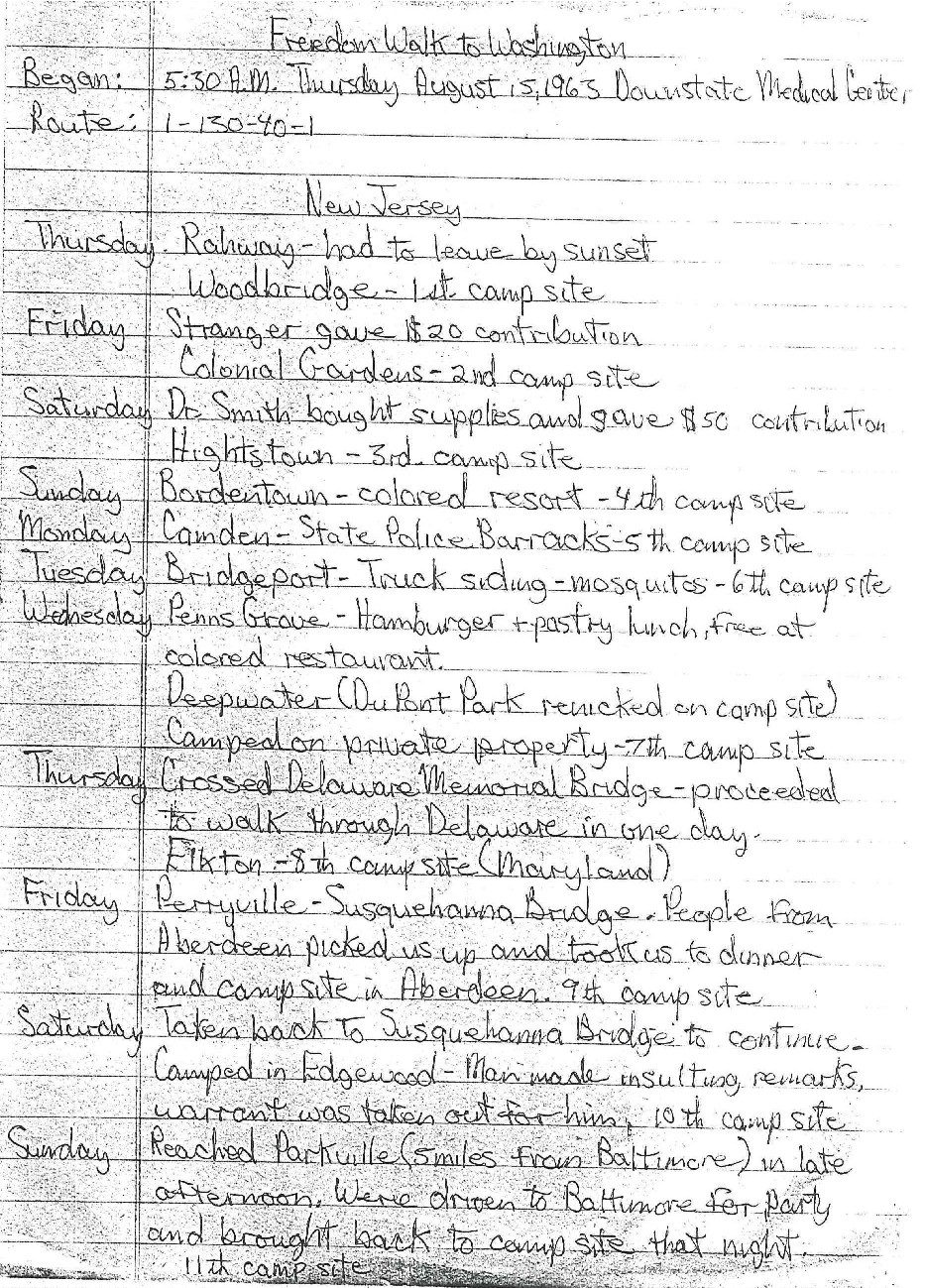 We arrived in Washington on the evening of August 27th. CORE had contacted people in the Maryland branch and they made arrangements for us to stay in homes of members from that area.

The next morning, we were all gathered by two or three cars and taken to go the National Mall. We walked in from the border of the Washington Memorial as a group and everyone was taking pictures of us. We were staged to come in and walk up to the podium and be up there with King and everybody else, and that’s what we did. We were right behind King, Farmer and everybody else.

The only way I could explain the experience is that once we gathered from the different homes where we’d spent the night, we walked through the throngs of people, we were escorted up to the podium, and that’s when it struck. You could see nothing but this landscape of people, nothing but people. It was really incredible. We were giddy. I can remember it.

It was really a once-in-a-lifetime routine. 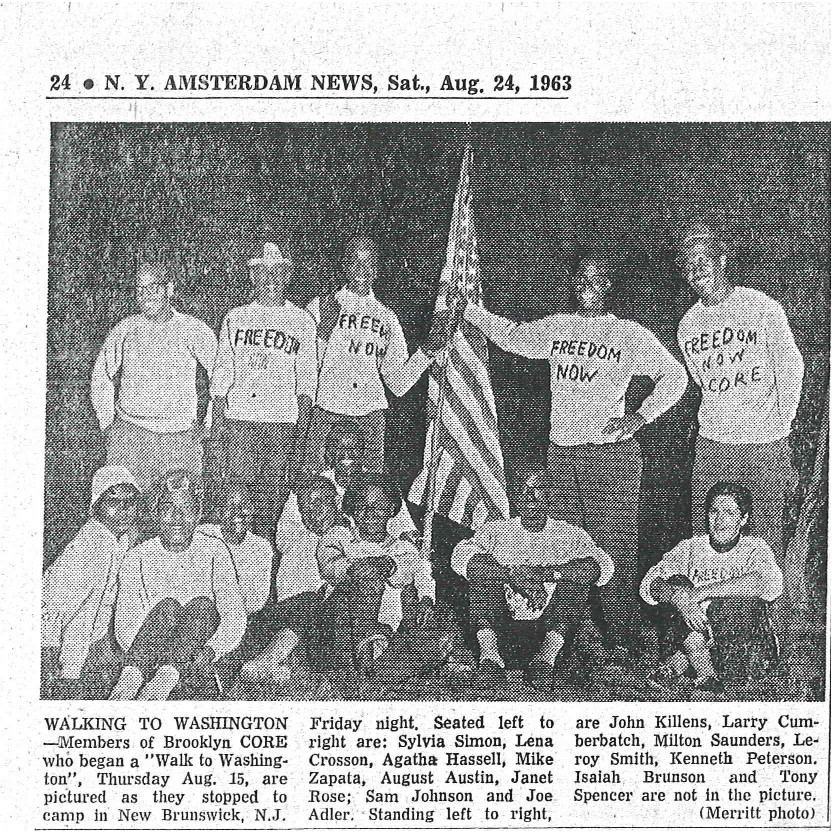 But there was no good result because of the March on Washington. Everyone went home feeling great, it was great to be together, to see that we could rally so many people for this one instance, but the bottom line was things continued on the issue of employment. They continued just as they were.

In 1964 Brooklyn CORE decided they were going to get into their cars and block the access to the World’s Fair in Queens as a method of bringing to the conscious of other people that we needed jobs and that we weren’t getting our fair share of the construction that arose. The year after the march, we were still talking about jobs! We came back to Brooklyn and what we had done in ‘63, we were still doing it in ‘64 and ‘65.

In college, I majored in sociology because of my experience with Brooklyn CORE and because of what was happening nationally in terms of jobs and desegregation. But I decided that instead of being a social worker, instead of simply playing along I would become a lawyer, to make change. As a lawyer I could do more changing circumstances than I could as a social worker in a closed system.

Memories From The 1963 March On Washington