March 7, 1965 in Selma, Alabama, Blacks, Whites from all walks of life and age groups joined together with Dr. Martin Luther King Jr. in solidarity to protest for their constitutional right to vote. They were warned and told to return to their homes and churches, but refused to be defeated. This day they called "Bloody Sunday." Many were wounded and there was much bloodshed. The world and President Johnson took notice of what happened in Selma and he stated "What happened in Selma is part of a far larger movement which reaches into every section and state of America."

As the brutality and hatred attacks continued they still continued to march on. They refused to remain silent and walked hand and hand unified for justice. It was then on March 15 of 1965, eight days after the march in Selma and four days after James Reeb death, a pastor and civil rights activist of Washington D.C. that was marching for civil rights in Selma, Alabama where he was severely beaten by white segregationists and died of head injuries at the age of 38.

President Johnson then asked for a comprehensive voting rights bill and his speech shocked millions all over the nation as he stated "Their cause must be our cause too. It is time to overcome the crippling legacy of bigotry and injustice."As he ended his speech saying in solidarity "We shall overcome!" On March 18 of 1965, Johnson's bill was passed; the people now had a legal right to March from Selma to Montgomery, yet Governor Wallace refused to provide the protection necessary for demonstrators.

Johnson federalized the Alabama National Guard and March 21 -- 62 days after the campaign began 32,000 demonstrators came together to make their request known. One man's idea soon became a movement that influenced a nation and collectively they changed the world. Ava DuVernay epically recreated this time in history in the film Selma. In the film, Dr. King was portrayed by the phenomenal David Oyelowo which has quickly become a well-known name in Hollywood. David's portrayal of King was the most astounding performance I have seen in years. Oprah Winfrey put her all in the role of Annie Lee Cooper, an African American civil rights activist in the 1965 Selma Voting Rights Movement who is best known for refusing to back down and punching Selma Sheriff Jim Clark. Winfrey's portrayal was nothing short of amazing.

Not to mention the Incredible Mind of Ava DuVernay that made the film absolutely impeccable. Critics are calling Selma "A truly great American film" and "The best film of the year." Selma has already received four Golden Globe Nominations for Best Picture, Best Director, Best Actor, and Best original song. Ava DuVernay not only recreated a pivotal time in history, but yet has become a part of history herself by being the first African American Woman to receive the nomination of "Best Director." Though she graciously accepts the nomination she pays homage to those that came before her.

With all the senseless crimes and police brutality in the media today this film gives us hope, courage, and it awakens us to a movement in time which we must never forget. As many are now protesting and wanting change, it is clear that we not only demand change, yet become the change we desire to see in the world. Dr. Martin Luther King Jr. stood for peace, not retaliation or police brutality, yet justice for all mankind. Selma is so timely and it reminds us of how far we've come from 50 years ago to where we are now. As we protest as a people, let us honor the legacy of Dr. King and the thousands that marched before us by protesting in solidarity for one day we will see justice. Selma is currently playing in select theaters and will be in theaters across the country January, 2015. 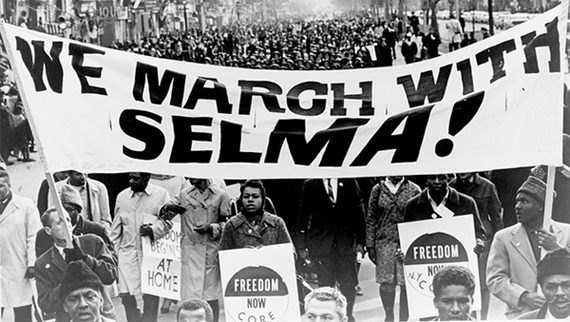