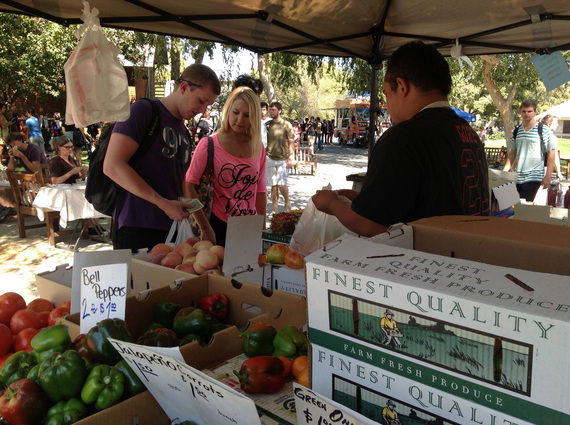 March is National Nutrition Month and despite nutrition being a popular topic throughout the year, this month reminds us that nutrition-related research and programming continues to be a high priority globally.

We find ourselves today in a world consumed by malnutrition--a population with 1.9 billion overweight or obese adults (too many calories), 795 million who are underweight (too few calories), and 2 billion who may consume enough calories but lack the necessary micronutrients, such as iron, which is one cause of anemia. According to the World Health Organization, anemia continues to be the most common nutritional disorder in the world.

Sadly, a lack of optimal nutrition affects one throughout his or her life and becomes cyclical, affecting generation after generation. And, although many of us who work in public health know nutrition is a pillar for a child's brain development and a tool for chronic disease prevention, often these messages are lost in controversies regarding research funding, bad science or a lack of it, and the competing interests of various stakeholders.

Nutritious food, like air and water, is a basic physiological need for human metabolic requirements. Yet food and nutrition are much more than meeting metabolic needs. Nutrition is a multidimensional, complex problem requiring interdisciplinary science and interventions. Nutritional status is dependent on internal biological variables and external factors, such as food supply and safety, clean water and sanitation, poverty, education and healthcare access.

The global food system is an interrelated maze of social, agricultural, environmental and economic considerations and constituents. To meet the needs of an estimated population of 9.6 billion in 2050, food, nutrition and health policymakers and multidisciplinary teams of researchers and practitioners must collaborate in science and build awareness. Bridging the gap between farm and health is a societal challenge.

Several countries have made significant progress in improving undernutrition. The Global Nutrition Report highlights many of these countries, such as Tanzania, Ethiopia and Rwanda, and contributes their successes to encouraging political environments, cost-effective nutrition interventions and diverse economic and social policies.

In the United States, obesity continues to be a scourge, with more than a third of adults and 17 percent of children (aged 2-19) being obese in 2011-2012. Approximately 51 percent of U.S. adults have at least one noncommunicable disease (NCD), which are non-infectious or non-transmissible. Common NCD risk factors include high blood pressure, excess weight and obesity and raised blood glucose--all factors influenced by diet. While the cost of healthcare is an ongoing debate in the United States, 86 percent of those costs are due to NCDs. This is an extreme price for diseases that are primarily preventable, such as type 2 diabetes.

The Academy of Nutrition and Dietetics commenced National Nutrition Month in 1980 to increase awareness on the importance of food choices. The #March4Nutrition campaign, started by 1,000 Days, focuses on the critical phase of development from conception to 2 years of age. March is a yearly reminder of not only the importance of nutrition in health throughout life, but also the crucial role that working across sectors and disciplines such as economics, food science, agriculture, education, policy and communication plays in improving diets.