Earlier this week I heard some very powerful and sad stories from two residents of Philadelphia. Teresa Hill spoke about her children's and grandchildren's struggles with asthma while living in the city. Then Vietnam veteran Sgt. Gerald Brown gave a very moving speech about losing a granddaughter to respiratory disease. Gerald says the Sierra Club has helped him make the connection between invisible pollution and his family's health.

Teresa and Gerald were just two of nearly 80 Philadelphia-area residents who took part in a rally and march that I joined on World Asthma Day. The crowd - made up of volunteers with the Sierra Club, Moms Clean Air Force, and PennEnvironment - called for a transition to clean energy and marched to the local Environmental Protection Agency office to demand one of the biggest polluters in the state to be held accountable. 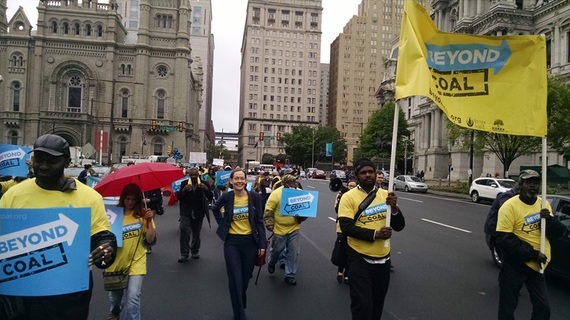 Philadelphia is downwind from the Brunner Island coal plant, and the state is proposing to create a loophole for the plant so it doesn't have to operate its controls for smog-causing pollution. The plant is the single biggest source of this pollution in nine counties, including the city itself, and the air pollution it creates causes significant respiratory issues for tens of thousands of people in the region, like Teresa and Gerald's families. Philly kids have asthma at double the national rate!

Clean air activists in Pennsylvania have been fighting for stronger air pollution controls for Brunner Island for years, packing public hearings, sending in letters to state and federal officials, and more. This activism even led to the creation of a new team in Philly - Veterans for Clean Air - of which Gerald is a member.

Despite the public outcry for stronger pollution controls at Brunner Island, state officials are allowing the facility to continue without operating the controls thanks to a regulatory loophole.

So on World Asthma Day, residents marched to the EPA Region 3 office in the city to make their voices heard and demand the loophole be closed.

I was honored to march with and speak to these activists and call on EPA to take action. We can't let the Brunner Island coal plant continue to shirk pollution standards while kids and so many others are fighting for their next breath. You can help - take action today!