We spanned seven continents, seas of women numbering in the millions, impossible to ignore. We showed up in hundreds of U.S. cities, including places like Wichita and Fairbanks and 50 people out of the 360 who live in Mentone, AL. There was a group in Antarctica and even one in a cancer ward in L.A. We were fierce and defiant, meditative and joyous, grinning and teary-eyed. Some danced, others moved slowly with the help of a cane or another's arm, some were too packed in to move much at all. Yet we all soared. 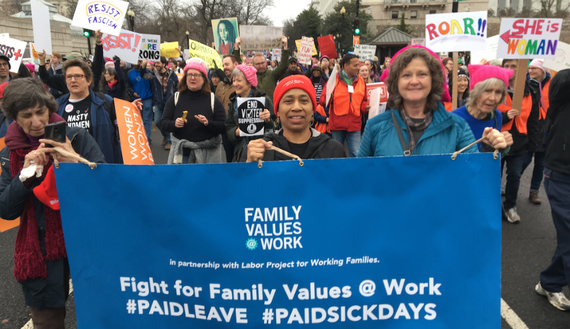 There was no way to find any of the people I was looking for at the DC march - the Family Values @ Work contingent, friends from Baltimore, New York, Chicago, Atlanta, California, my home state of Wisconsin. But I ran into a bunch of people I hadn't seen in years and met dozens more - women marching with their mothers and their children, friends who piled into buses or crammed themselves into some cousin's flat, people who came with their family, lost them and found new pals to march with, men proud to be supporting women, women who'd been protesting for decades and those who'd never been on a march before.

Our slogans and chants were as varied as we were but the main motivator was overwhelming: to tell the occupier in the White House, "We are here. We know what you're up to and we won't allow it. Together we can and will stop you and move toward the world we deserve."

But this march was a transformative experience for many who attended. Women's rights may be human rights, but women are many kinds of humans. We each come as a package - you can't strip away issues of race or immigration status or sexual identity. Those who tear off a woman's hijab or call her a terrorist for being born in Syria, those who beat a woman's son or lover or the woman herself for driving or living while Black, those who threaten a person's livelihood or right to live because they love someone of the same gender or redefine their own - these bullies threaten women. Our opponents use those threats to strengthen their power over all of us and to keep us from maximizing our own.

Many more of us now know this crucial truth: we can't let them get away with any of it. Register Muslims and we'll all register. Detain refugees and masses of us will show up. Hold a town hall and we'll turn people out and demand to know why you're stripping health care from those with a pre-existing condition. Threaten teachers who don't out their students, and your phones won't stop ringing.

For me and nearly 700 other people, the day ended with an evening town hall called "Where Do We Go From Here?" Family Values @ Work was one of the groups that co-hosted this event called by the National Domestic Workers Alliance and Make It Work. We wanted to reach other marchers but especially those who were new, showcase what we're already doing and how we will continue to combine forces in the future - and how they can be part of this robust women's movement.

It was a star-studded evening. First Alicia Garza, co-founder of Black Lives Matter, engaged in a conversation with Gloria Steinem about the impact of women's organizing. The amazing Obie-award winner Sarah Jones brought her cast of characters to share their impressions of being on the march. Ai-jen Poo moderated a panel with four extraordinary women - Kimberle Crenshaw, Cecile Richards, Linda Sarsour, and Claudia Galindo. And then partner groups in 90 seconds each demonstrated what we're doing and shared an action step (Family Values @ Work kicked it off).

But the real stars were the people who packed that room in the National Press Club to be part of the conversation. We began by having pairs meet each other and say why we'd participated in the women's march. The woman next to me was in her early 20s and lives in Maryland. "I've never been on a march before," she told me. What made her decide to come, I asked.

"Everything about me is under attack," she said. "I'm an immigrant, a woman of color, a lesbian. I had to be there."

We all had to be there. And we will all keep being there for ourselves and for each other.