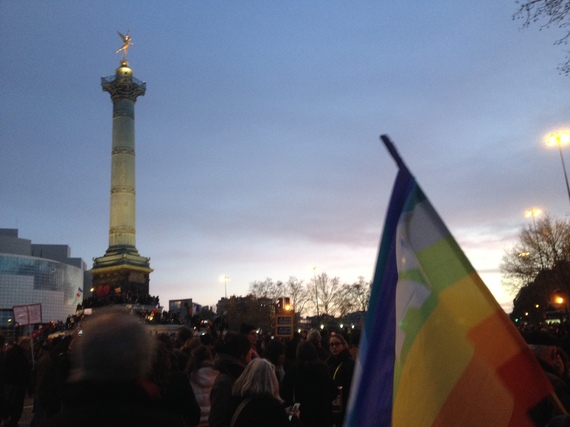 For more than 45 years, I have gone to demonstrations in support of peace and freedom, but never have I seen, felt, or heard anything like today's march in Paris, organized on two days' notice in support of free expression and as a declaration that the people here are not afraid of deranged deranged terrorists. More than 2 million people filled the streets of the city's Right Bank--double the number expected--and another million marched in other French towns and cities. Probably half of them were carrying some version of the sign "Je suis Charlie," or "I am Charlie," in reference to the revered anarcho-blaspho-antiauthoritarian cartoonists who sustained the small weekly paper Charlie Hebdo.

First, the spontaneous applause that broke out when the CRS, France's once infamous brutal riot police, passed in a phalanx of trucks. A couple dozen of their confreres had been killed or severely wounded in the Wednesday and Friday attacks launched by the self-proclaimed followers of Al Qaeda, who were as much petty criminals as they were jihadists. 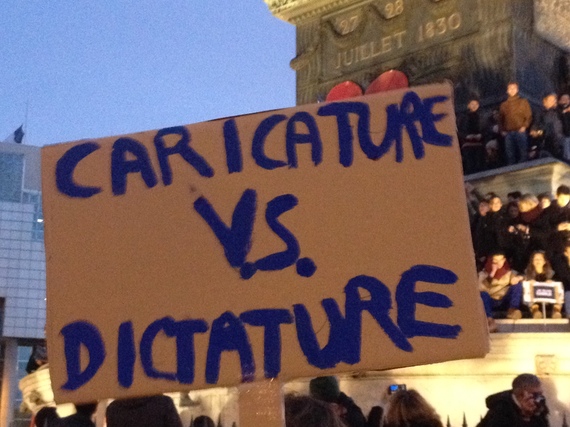 The second came when a few hundred people, most of them students, climbed up onto the monument at the Place de la Bastille and lead the crowd in multiple chants about freedom from fear and freedom for expression--followed by a tear-drawing acapella rendering of the French national anthem, whose words are at once militant and painful in the call for freedom.
When the march had concluded, and I had expressed my astonishment in an e-mail to an American, it was met with a slightly grumpy reply, in which the writer noted similar expressions of courage after the 9/11 attacks on New York's Twin Towers. Of course, there was courage then--immediate courage, in the counsel of then-President George W. Bush, to carry on with business, and later to pass the infamous Patriot Act, which in effect authorized unlimited spying on any American anywhere, anytime.

Lest anyone imagine that Charlie Hebdo will disappear, the surviving journalists-cartoonists will stick to their next issue this coming Wednesday--with the help of both Le Monde and Liberation, France's two leading dailies. As always with Charlie Hebdo, there will be no shortage of irreverence--perhaps suggested by an imitator cartoonist whose work showed up on several columns and kiosks on Sunday afternoon. it depicted Marianne, the symbolic figure of French liberty, grasping a highly sexed Eiffel Tower. 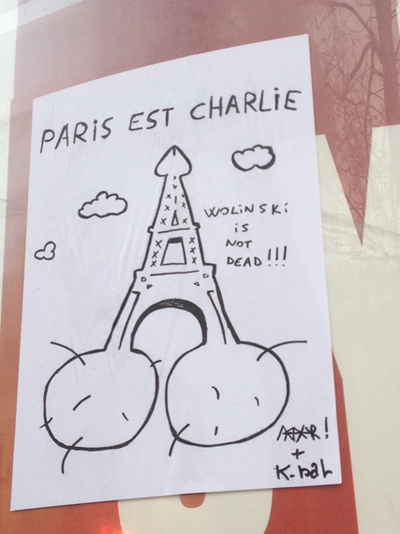 Three million ordinary people turning out to express their support and solidarity with the survivors and the victims in an attack on a tiny antiauthoritarian newspaper is quite another matter from the White House admonition after 9/11 to carry on with the nation's business.