If you thought Hieronymus Bosch's works were image overdoses, imagine the film adaptation. That's pretty much the impression we get of Marco Brambilla's trilogy of 3D video collages; it's a delicious sensory overload revealing the entire story of our creation, existence and destruction...on a loop. Brambilla is best known for his work on Kanye West's video, "Power," which he said was "kind of apocalyptic, in a very personal way.” However, we think the Megaplex series gives "Power" a run for its money. 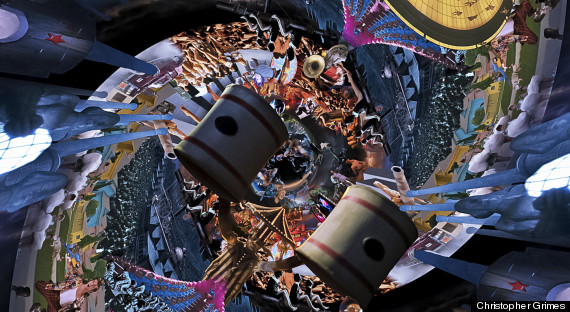 Four years ago, Brambilla takes the world on a Wonka-esque elevator ride from hell up to heaven and back down again with "Civilization (Megaplex)." Two years later, "Evolution (Megaplex)" showed us the civilization of mankind, beginning with brutal cavemen and ending with post-apocalyptic space folk. Both "Civilization" and "Evolution" act as fluid, moving tableaux, incorporating over 400 films from throughout cinematic history.

For the final chapter of his epic visual triumph, Brambilla finishes with the most technically complex work of the trio, dubbed "Creation (Megaplex)." The piece incorporates hundreds of clips from Hollywood and international films, folding them into the fabric of his ever-repeating narrative. In the slideshow alone we spotted cameos by Tom Cruise, Julie Andrews and Jim Carrey... and we probably missed about 100 more. The cinematic head rush starts at the big bang, continues through embryonic inception, idyllic paradise onto annihilation and back and the big bang once again, all within the form of a giant DNA double-helix. And remember, this is all coming to you in 3D.

Brambilla spoke to the Huffington Post Arts on his cultural lexicon in an earlier interview: "[The works] represent the collective consciousness of their era, a kind of pop version of subliminal film memory. I looked through a lot of foreign cinema for some of the more provocative imagery and everything, virtually every genre you can think of is pretty well represented."

"Creation (Megaplex)" will show at Christopher Grimes Gallery in Los Angeles from November 3 until December 22, 2012. See stills from the work below and watch "Civilization" to get your mind blown.

Civilization by Marco Brambilla from CRUSH on Vimeo.