Marco Rubio is the latest Republican to get a modest horse race poll bounce, but will it last? Support for same sex marriage hits another new high. And Chris Christie has a bad week. This is HuffPollster for Friday, April 24, 2015.

Presidential aspirants can get poll "bounces" when they announce their candidacies, and Sen. Marco Rubio (R-Fla.) was no exception after his official kickoff on April 13. Rubio gained on three new national telephone surveys conducted in the following week that broke out the preferences of Republican identifiers. His support jumped from 7 to 11 percent on the the CNN/ORC poll, from 7 to 15 percent on the Quinnipiac University poll and from 8 to 15 percent on the Fox News poll.

Though nominally true, both assertions were misleading. Rubio's 15 percent on the Quinnipiac poll is just two percentage points higher than Jeb Bush at 13 percent, with undecided's 14 percent in between. On the Fox News poll, Rubio's 13 percent is just a single point higher than Scott Walker's 12 percent. Given margins of sampling error of 4 percentage points or greater, these small single digit differences have little meaning.

"GOP field stays tight," the headline of the CNN poll write-up, was on the mark. So far, no Republican candidate leads "the pack."

More importantly, these post-announcement bounces are often short-lived. Consider these snapshots from the HuffPost Pollster chart, whose regression trend line tends to smooth out random noise and the occasional outlier poll.

Just after Ted Cruz announced his candidacy on March 23, a PPP poll showed his support surging from 7 to 16 percent, but subsequent polls show the bounce fading. 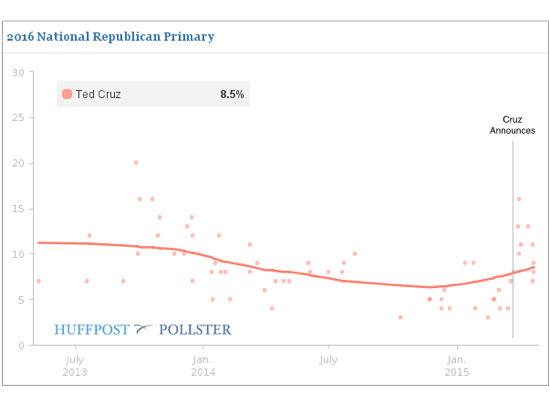 Scott Walker's bump came following the announcement in late January that he was forming an exploratory committee. That news produced a big bump on to a lesser extent on surveys by YouGov and Fox, all of which have faded in subsequent measurements. 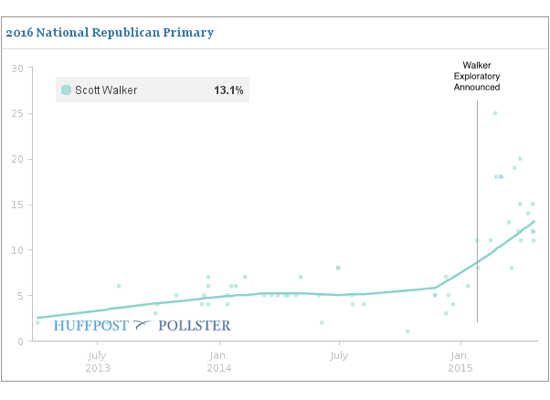 And finally, we have the latest results for Marco Rubio which, so far at least, follow the same pattern. 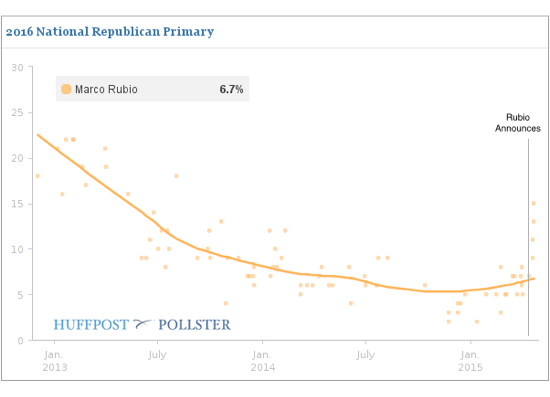 The relatively small movements around significant campaign events is a dull echo of the roller coaster of poll surges and declines tracked by the Pollster chart during the 2012 GOP nomination race. 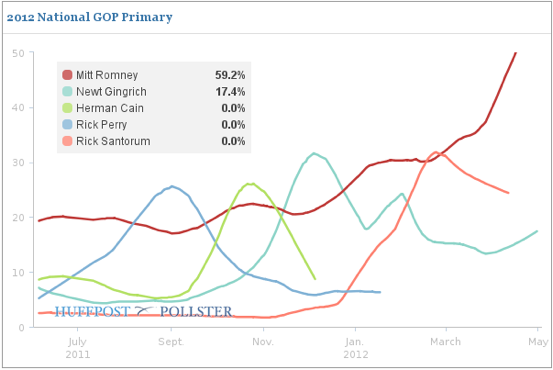 So far in 2015, "undecided" remains the true GOP front runner. And poll junkies are likely due for another bumpy ride.

WHY WE CAN'T LOOK TO PAST ELECTIONS TO PREDICT 2016 - Natalie Jackson: "Many news and blog articles from journalists and academics will try to tell you that what’s happened in the past informs us about what will happen in 2016. Their anecdotes, data and charts assume the predictive power of a relationship between past presidential elections and some other piece of information. We’ve had presidents for over 200 years, so history is convincing, right? Not always. Some skepticism is actually warranted. Presidential elections are not frequent enough, or similar enough, to make very many conclusions based on prior contests….just 17 presidential elections since World War II, each of which has been unique in many ways and similar to others in additional ways….The number of observations matters because traditional statistics focuses on finding 'significant' relationships between variables -- meaning that the relationship between two things is not accidental and didn’t happen by chance. It’s much more difficult to confirm that something didn’t happen by chance when you have only 17 observations." [HuffPost]

SUPPORT FOR GAY MARRIAGE REACHES RECORD SUPPORT - HuffPollster: "With the Supreme Court taking up same-sex marriage next week, support for protection of marriage equality is as high as it's ever been with 61 percent of Americans in favor, according to a new Washington Post/ABC poll….Sixty-two percent of Americans say states should have to recognize same-sex marriages performed legally in other states, while sixty-one percent say states should not be allowed to ban same-sex marriages...Question wording may play a role. The survey asked respondents to interpret something of a mouthful: whether they 'support or oppose allowing individual states to prohibit same-sex marriages.'…[O]ther polls, phrasing the options a little differently, have found considerably more support for giving states the option to make their own decisions on same-sex marriage, with Republicans especially amenable to supporting states' discretion over a national ruling." [HuffPost, see also USA Today, Suffolk University, ABC, WashPost]

OBAMACARE NUMBERS TREND UP - HuffPollster: "Favorable impressions of President Barack Obama's Affordable Care Act have increased slightly in recent months...The latest monthly survey conducted by the Kaiser Family Foundation finds 43 percent of Americans reporting a favorable opinion on the 'health reform bill signed into law in 2010.' Forty-two percent reported having an unfavorable opinion, and 14 percent said they were unsure. While some headlines emphasized the nominally net positive rating, 'the [1-point] difference is within the survey’s margin of sampling error and is not statistically significant,' according to Kaiser's report. Far more important is the trend that shows views of the ACA narrowing to what the Kaiser analysts described as 'the closest margin in over two years.' Where negative views exceeded positive views by an average of 10 percentage points in KFF tracking during 2014 (47 to 37), the two categories have essentially drawn even over the past several months." [HuffPost, KFF results]

Why the change? - More HuffPollster: "One obvious theory involves the experiences of the nearly 12 million Americans who are now covered by individual health insurance plans purchased from an ACA exchange...Kaiser's polling has shown a gradual increase in the number of Americans overall who say the ACA has helped rather than hurt their families, from 14-15 percent in the summer of 2014 to 19 percent in March and April of this year...A change in the political environment may be even more important...Since November...The political ads [attacking ACA] stopped, as they always do following an election. Meanwhile, health insurance companies ramped up advertising aimed at the potential customers shopping for policies on the ACA exchanges....According to CMAG, insurers spent $229 million during the three-month open enrollment period, accompanied by another $80 million in promotion...those dollars were far in excess of the money spent by ACA critics between Labor Day and Election Day 2014. 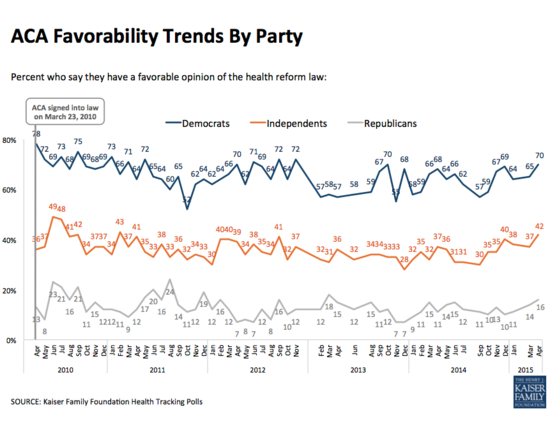 A BAD WEEK FOR CHRIS CHRISTIE - HuffPollster: "Gov. Chris Christie (R-N.J.) probably isn't having the 2015 he hoped he would. A poll released Monday finds that Christie's job approval rating has fallen to a record low among New Jersey voters. According to the Quinnipiac poll, only 38 percent of New Jersey voters approve of the job Christie is doing as governor. This represents an 8-point drop from January, as measured in an earlier Quinnipiac poll. A majority of voters expressed disapproval of Christie's handling of education, the economy and the state budget. Christie's approval score on this new survey is the lowest he has received on the Quinnipiac poll while he's been in office, and the lowest approval rating for any governor in the nine states Quinnipiac has surveyed this year." [HuffPost, Quinnipiac results]

Another NJ poll, another low rating - Fairleigh Dickinson University’s PublicMind poll: "Governor Christie’s approval numbers remain unchanged from late February, the last time voters were asked their opinion about his job performance. Right now a third (36%) say they approve of the governor, with an even half (50%) who disapprove. A little over a month ago the numbers were virtually the same – upside down with disapproval (51%) higher than approval (35%)." [PublicMind]

Even lower numbers on 'trust' - Rutgers Eagleton: "As a kinder, gentler Chris Christie wooed New Hampshire Republicans last week...New Jersey voters are less likely than ever to apply positive personality and leadership traits to their governor, according to the latest Rutgers-Eagleton Poll. Just 17 percent now say 'trustworthy' describes the governor 'very well,' while 44 percent say it does not apply at all. Another 36 percent think it applies only 'somewhat well.'...Only one in five voters now thinks the terms 'reformer' or 'fair' describe Christie very well, and only a quarter say the same for 'effective.'" [Eagleton]

But could Christie pull a comeback like John McCain? - No, says Harry Enten: "The basic problem with the comparison is that McCain was never as far back in the polls as Christie is now in New Hampshire. Christie is in fourth place in [New Hampshire], polling at 9 percent and trending downward in the Pollster.com aggregate. His favorable rating in the most recent Franklin Pierce University poll was 43 percent, lower than his unfavorable rating of 46 percent. So not only does Christie have to hop over a bunch of other candidates to take the lead, but a plurality of Republicans dislike him. A negative net-favorable rating can be deadly for a candidate as well-known as Christie." [538]

-CNN: Economic optimism hits a new peak... - "For the first time since May of 2013, more Americans polled say they have a positive impression of how Obama is handling the presidency than a negative one: 48% approve of the way Obama is handling his job, while 47% disapprove." [CNN]

-And Boston bomber should get death penalty - CNN: "58% say [Dzhokhar Tsarnaev] should face death, 38% that he should be imprisoned for life." [CNN]

-Fox News: - Polls on the situation with ISIS, the Iran deal, and the economy. [Results here, here, and here].

-CBS: Support for legalized marijuana - "Fifty-three percent of Americans now say the use of marijuana should be legal, an all-time high in CBS News polling." [CBS]

-Obama's quarterly approval average is the highest since 2013. [Gallup]

-Nate Silver argues that Jeb Bush's low favorable rating may only matter in the GOP primaries. [538]

-Andrew Kohut considers whether an Iran deal would imperil Jews' loyalty to the Democratic Party. [RCP]

-HuffPollster finds out which candidate's campaign logo Americans like. [HuffPost]

-The Apple Watch "wrist poll" is already a thing. [@jetscott]

HUFFPOLLSTER: Has Rubio Really Jumped To The Head Of The GOP Pack?
Rand Paul Trolls 2016 Candidates