Every week, The WorldPost asks an expert to shed light on a topic driving headlines around the world. We recently spoke with photographer Marcus Bleasdale about his work in the Central African Republic.

Pope Francis brought his appeal for peace into a war zone last weekend when he visited the Central African Republic, a country torn apart by violence between Muslim and Christian militias.

Muslims and Christians alike celebrated the pope's visit. Once he left, however, violence returned. A Muslim man was found dead on Tuesday after he tried to leave a Muslim enclave encircled by the mostly Christian anti-Balaka militia in the capital of Bangui. Two days later, rebels from the mainly Muslim Seleka movement killed eight civilians at a camp for displaced people near the central town of Bambari.

Fighting erupted in the Central African Republic in 2013 when the Seleka seized control of the government, and the anti-Balaka militias emerged to fight their brutal rule. The violence quickly spun out of control as atrocities by both militias against civilians mounted, leaving at least 5,000 people dead and nearly 1 million displaced. The conflict has been simmering since a peace deal was signed last July. Presidential elections planned for October were postponed after violence flared again in the capital.

The WorldPost spoke to Marcus Bleasdale, an award-winning photographer who witnessed some of the most horrific days of the conflict. He and Human Rights Watch's director of emergencies, Peter Bouckaert, traveled through the war-ravaged country, collecting testimonies and images published by Human Rights Watch, National Geographic and Foreign Policy magazine. A photo book of his work, The Unravelling: Central African Republic, with essays by Bouckaert and a foreword by New York Times columnist Nicholas Kristof, was published last month.

Why did you call the series and book "The Unravelling"?

Essentially that's what we witnessed. We witnessed the unraveling of a country, the unraveling of a government and the unraveling of relationships amongst different ethnic groups and religious groups that had been forged over generations. Historically, Central African Republic has been a place that people came to for refuge -- they came from Chad, Congo and Sudan over the last 100 years or so. Different ethnic groups and religious groups have been living together and intermarrying for years and years. This whole eclectic relationship that had developed in the country unraveled within weeks.

You’ve covered the Central African Republic, and other conflicts in the region, for decades. Were you shocked by how fast and badly things unraveled in CAR?

I wasn't so shocked about the original takeover of the government by the Seleka movement. What was more shocking was after the Seleka were dissolved, how quickly the uprising against the Muslim population started, and how aggressive and violent and personal it became, very, very quickly.

Why did you feel it was so important to document this descent into violence?

I first went to document the human rights abuses under the Muslim Seleka government with Human Rights Watch in August 2013. We returned in December, and were there on Dec. 5 when the anti-Balaka had this quite clearly coordinated attack on several towns throughout the country that lasted several days. When we returned in early 2015, the Seleka movement fled Bangui to northern regions, and Bangui and other towns rose up and started to attack the Muslim population and their property.

It was extraordinarily underreported by the world's media. There were times when I could count possibly three, four or five different journalists and photographers in the country at any time. It was just desperately under-covered, so much so that nobody knew what was going on. The United Nations wouldn't travel into the regions because of the security issues and the restrictions they had. So, the only way we were going to learn about what was going on and engage people -- like the French government, for example -- to come in and try to calm the situation down with peacekeepers was do this reporting with Human Rights Watch.

Has working on this conflict changed you, personally or professionally?

Yes, definitely. It was an extraordinarily violent conflict, and a very personal one in that most of the killing was very accessible. We were present on many, many occasions in which people were being attacked and killed in front of us, and there was nothing you could do about it because it was mob rule. When there's 200 to 300 people killing one person in front of you there's nothing you can do but record it, to make sure that the people who are committing the atrocities are held to account at a later date. When you see that sort of behavior and you see it at such proximity and carried out with such hatred, of course that has an impact on you.

Has it changed the way I work? I think it's more that I appreciate how it is more important than ever to cover these underreported stories, especially when news organizations don't have the resources to put people on the ground. We were in the Central African Republic on the 20th anniversary of Rwanda's genocide. We were witnessing again this very personal hatred, and I think if it wasn't for the NGOs and human rights groups who were there and their very effective reporting and advocacy, it could very easily have been another Rwanda.

We were present on many, many occasions in which people were being attacked and killed in front of us, and there was nothing you could do about it because it was mob rule.

Do you have a favorite photo from this series?

I don't think any of the photos I took at that time can be classed as favorites. It's not the easiest body of work I've ever had to take and use.

But I think the one that moved me most was the one I took of the reunification between a mother and her son, after her son Eliam had been abducted by the Seleka with his father. We found Eliam and his father exhausted on the side of the road with his father after they'd managed to escape from the Seleka, and we took him back to his family. That was a very moving moment. That moment of hope, of enduring love between a mother and her son, was probably a moment that will stay with me for a long time.

The conflict in CAR can often feel so remote to outsiders. Who are some of the unsung heroes that you think people should know about?

There were a lot of people, from both religious communities as well as civilians, who protected people during the attacks. There were many priests who protected the Muslim populations in their towns. They risked their lives in order to secure the safety of people who are from the religion that was attacking their own people. There are many stories of many imams doing that and many stories of many priests doing that -- too numerous to mention.

Do you think the pope’s visit will have any impact on the conflict?

This is a question I've been asking myself. I think what it can do is bring attention to what's going on there, but yet again, despite the amount of interventions we have made into countries like the Central African Republic over the years, we seem to be still unsure about how to move forward.

While I think democracy is the way forward, it's very difficult to see how we can have an election in this country without the majority of the Muslim population, who are in camps in Cameroon and in Chad, and call that government legitimate. And at the same time, there are still armed groups from all sides roaming around and the intimidation that goes on is huge. So, I don't see how we can force a process on a country so early, without trying at least some form of demobilization and disarmament of militia, and reasonable security for the civilian population.

The pope's visit will focus attention on the issues of Central African Republic for what, five minutes, 10 minutes, a day, two days? But, really what we should be doing is focusing our attention on this whole concept of the policy of forcing elections on a country that maybe isn't quite ready.

What is perpetuating the violence there at the moment?

The Seleka movement is fracturing -- some parts of the movement would like to sit around the table and have a dialogue, some are quite happy with the status quo, and others would like partitioning between the Muslim population in the north and the Christian population in the south. There is as much intergroup fighting as there is fighting between anti-Balaka and Seleka.

If you travel into the regions you can see that these organizations are essentially mini fiefdoms. They're profit centers for the commanders in those zones. All of the natural resources the country had -- gold, diamonds and timber -- are earning the people controlling these remote areas a fortune.

It's clear what's happening when you see the types of weapons that people have. The anti-Balaka are no longer walking around with just hunting rifles, they're now armed with AK-47s and RPGs and reasonably professional grenades. It's also clear that the Seleka are receiving outside funding and support.

Do you plan to return to CAR in the near future?

Yes, I'm currently doing a project there for National Geographic magazine, continuing the work we've been doing there.

This interview was edited and condensed for clarity.

- What Is The State Of Political Islam Today?
- Formerly Jailed Journalist Explains Iran's Recent Crackdown On Dissent  - Why Myanmar's Upcoming Election Is So Historic
- What Made Dozens Of People Hide In The Laotian Forest For Years? 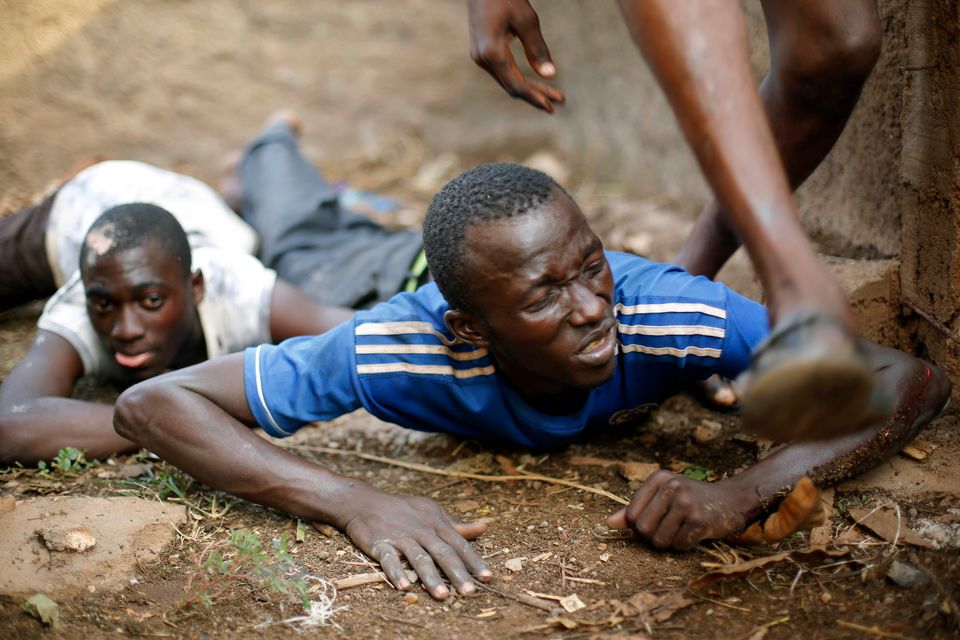