My mother kept a whole world under a casserole lid.

My generation was the opposite -- we believed it was healthy, in fact, necessary, to talk about secrets, emotions and especially pain. We were rock 'n roll, The Pill, feminism, consciousness-raising groups, civil rights marches, the death of God and Vietnam.

When I asked my mom,"Did you like having kids? What about sex? Did you feel you did a good job?" her answers were, "It wasn't a choice," "it's none of your business," and "concentrate on studying."

So I did. I studied my mom and tried to plumb the bottomless well of dissatisfaction, irritation, curiosity, admiration and love I felt for her. When I left home, because I couldn't make sense of what she thought, and because I was young, I dismissed her.

In my thirties, childless, never married and unreligious, still trying to understand her, I wrote an essay about how she and her friends despaired when they found they were "PG" again -- in the 1950s and 60s, their code for being pregnant, meant to keep their kids from knowing -- but they didn't use birth control because the Catholic Church forbade it. When I showed her the essay, she was upset.

"You made us look dumb," she said.

I hadn't meant to make my mother look dumb or to hurt her, but I have to admit that, in some ways, I had thought these women were dumb. My mom was so opinionated it drove me crazy. How could she bow to a priest? Or a husband? It was preposterous.

In my forties, I started noticing that television, newspapers and universities never wondered what that generation of stay-at-home moms thought. Books were written about women artists, aviators and many other women, but not about stay-at-home moms. They were out of fashion, dumped at the door of a consignment shop. I didn't like the world to undervalue my mother, even if I had.

I wrote another essay and showed it to my mom. She cried.

"Because you felt you didn't know me. I came off as mired in raising the family. You didn't see I had other interests I tried to pursue in any spare time I managed. You made me one-dimensional. I was active in civic affairs and politics."

I have to admit I had seen such activities as second-rate -- volunteer, social, an escape from the house, not as worthwhile as men's work. I was a feminist, but as brainwashed as anyone.

"You said, 'The world doesn't think we have anything to say? How about clarifying that into something less all-encompassing? I assume some of the professional women like you might now be interested in what we have to say. If not, I guess I'll have to write my own book."

My attitudes towards my mom were as confused as they had been in my twenties. After her kids left home, I wondered why she didn't go to college. Why didn't she help the poor or join the Peace Corps? I'm not annoyed with the dot.commers who don't help the poor. Why my mother? I wanted her to do what I felt guilty for not doing. It's not only our mothers who want us to live their dreams -- we want them to live ours, to be who we think they should be. My mother wasn't one-dimensional, but how I saw her was.

I had now reached my fifties. Although I had expected everything from my generation's revolutions, happiness had eluded me. Suddenly, I moved from wondering why my mom had lived as she did to asking how she had managed with so few choices. Did she feel short-changed? Did she have enough pleasure? Did she feel her life was worthwhile? How did she cope with disappointment? My friends' mothers didn't talk either and my friends wanted to know: Did you like having kids? Did your husband understand you? Was your constant bridge playing quiet desperation? Did you miss having a career? Would you marry again?

My mom didn't even have words for self-disclosure, whereas now, we have more words for "sharing" than for sympathy. I wondered if my generation's belief in the cathartic power of talk and therapy, our fascination with others' secrets on talk shows, resulted from our mothers' closed mouths.

And then, when I was in my mid-fifties and my mom in her mid-seventies, she loosened up. She even allowed me to interview her friends. With the naiveté of a younger generation I'd assumed she and her friends had finished their struggles. After all, they were 70-plus years old, but Clara, a tall, handsome artist who raised six kids, still tried to convince herself it was OK to paint and skip a day of making lunch for her husband. Anne, competent, self-assured, brisk, raised 11 successful kids, but my mother could always tell when Anne's mother was visiting because when Anne answered the phone, her voice trembled.

My mother loves potatoes. She eats them every night for dinner. I tell her, "I'm going to treat you like a potato, Mom." I wash her, peel her, test her with a fork and bake her. Then, with time, she warms to softness and opens her mouth. I get so much information I keep a tape recorder handy.
She especially opens up in the dark, when I visit and curl up in the other twin bed in her room. Before she begins her occasional soft snoring, she talks -- about Aunt Babe's lobotomy. About being pregnant -- "We were afraid to write our mothers, whether Catholic, Protestant or Jewish, because they always said, 'Again?'" About Mrs. Milligan, who divorced and disappeared with her kids -- driven to the airport in the middle of the night because creditors were chasing her husband. About not telling friends about my bad grades, "You didn't blab about problems." She'll talk about abortion, gay rights and what she thinks of my life. She lets the tape recorder roll and I hold my breath. 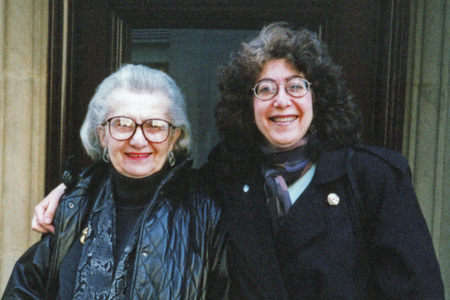 The author and her mother

Mardith Louisell's fiction, essays and memoir can be found most recently in Best Travel Writing 2012 (Travelers' Tales), in Solstice Literary Magazine ("Had They Learned about Jayne Mansfield?") and at http://ipinionsyndicate.com/author/mardilouisell/. She grew up in Duluth, Minnesota, on Lake Superior and takes photos of people's ears, which can be seen at www.mardithlouisell.com. "Peeling Potatoes" is excerpted from a book of interviews with women who were Midwestern housewives in the 1950s. She lives in San Francisco, where she works part-time in child welfare. Beside Myself, a book of flash fiction, is her current project.