The title of the movie is, fittingly, "Big Eyes." It tells the story of two once married artists, Margaret and Walter Keane, who rose to fame in the 1950s and '60s. Their subject of choice -- doe-eyed children reminiscent of Precious Moments characters gone wrong.

Looking back, the eerie nature of the creatures -- sugary-sweet, yet demonic -- seemed to mirror the Keane's relationship. In short, the two wound up in court fighting over who was the real originator of the Big Eye brand that took the art world by storm. Was it Walter, the public face of the Keane kingdom? Or Margaret, the housewife who claimed her husband couldn't paint a sunset?

Their story is unsettling, equal parts romantic and just plain creepy. And to fully enjoy Burton's biopic, starring Amy Adams and Christoph Waltz, you might want to get to know the quirky Keanes before "Big Eyes" hits theaters this December. Behold, everything you need to know about the couple behind the myth:

Nebraska-born Walter and Tennessee-born Margaret tied the knot in 1955 in Honolulu, Hawaii, both having been married with children before. He had studied art in Paris in the late 1940s, while she had been drawing since she was a child. One would claim the inspiration for the big-eyed Keane paintings came from his time in Europe after WWII, while the other would go on to say her soul-baring "waifs" (a word everyone seemed to use to describe the ghostly girls) originated in her childhood isolation.

It wasn't until 1957 that the Keanes' work went on display -- outdoors in an art show in Washington Square Park in New York City. The world was then introduced to a gaggle of young women staring at them from behind a frame, their soft lines and dreamy hues bleeding from one canvas to another. Almost inexplicable success followed. The late 1950s and 1960s were good to the anonymous Big Eyed women, and Walter positioned himself as the talent behind the operation. He showcased "his work" in galleries in San Francisco, New York, Chicago, and New Orleans.

How Did They Become Famous?

The paintings were just everywhere. "Walter was to Big Eye art what Howard Johnson is to to mutliflavor ice cream," Jane Howard wrote in 1965. Diane Keaton ogled Keanes in Woody Allen's "Sleeper" in 1973. Saturday Night Live featured Keanes in a contemporary art parody in the 1980s. Stars like Joan Crawford, Jerry Lewis, Kim Novak and Natalie Wood counted themselves as collectors. As does Burton, of course.

And, according to The New York Times, Walter would charge up to $50,000 per painting, earning millions of dollars a year.

Come on. Those eyes, though?

"I think what Keane has done is just terrific," Andy Warhol famously quipped. "It has to be good. If it were bad, so many people wouldn't like it.''

Warhol had a thing for consumerist art, so it's no shock he looked favorably upon the Keanes. But were they good? Adam Parfrey called them "saccharine kitsch madness," while Katherine Bishop dubbed them "maudlin popular art." By and large, the art world establishment tended to turn its nose at the big eyes, while the cult of Keane buyers continued to gobble everything from large canvases to postcards and dorm posters. 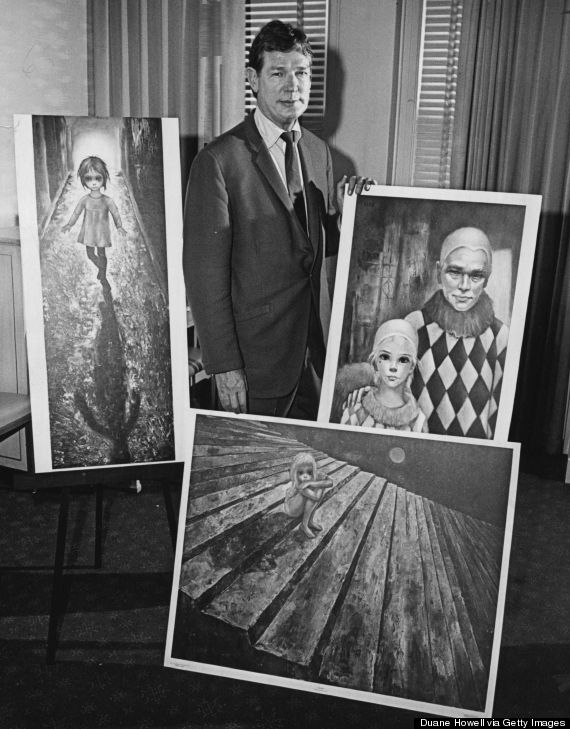 Walter Keane with two of "his" paintings: "Backstage" and "Alone." (Photo By Duane Howell/The Denver Post via Getty Images)

"[Margaret] helped Walter switch careers from selling real estate to running galleries in New York and San Francisco," Eve M. Kahn describes. "She raised their two daughters and painted at night while he traveled, philandered openly and drank heavily. The big-eye portraits, although shown at venues as prominent as world’s fair pavilions, did not impress aesthetes."

So Margaret finally spoke up. After decades of Walter taking the credit, she stepped forward. "For many years I had allowed my second husband to take credit for my paintings. But one day, unable to continue the deception any longer, I left him and my home in California and moved to Hawaii." In 1965, she was granted legal separation from her husband. And in 1970 she confessed on a radio show that all of the "eyes" paintings were hers.

In response, Walter likened himself to Rembrandt, El Greco and Michelangelo, and said that he was "flabbergasted" by Margaret's proclamations. The public lampooning culminated in a paint off -- well, it was supposed to. Walter pleaded a shoulder injury and never painted. Slander suits were filed. And Margaret produced Exhibit 224, a piece of artwork painted before jurors in 53 minutes that dramatically settled the dispute.

She was awarded $4 million in damages in 1986. In most people's opinions, and certainly in the eyes of the law, she had proved she was the real Keane artist.

Margaret, now in her late 80s, remarried and continued painting. Continued painting those eyes, to be exact. In 1992 the Keane Eyes Gallery was up and running, offering Big Eyes on posters, plates and prints, ranging in price from $200 to $15,000. "People either hate my paintings or they love them," Margaret observed shortly after the gallery's opening. "There does not seem to be much middle ground."

Meanwhile, Walter refused to admit Margaret's truth, despite the fact that public opinion had turned against him. He claimed to be penniless after he lost in the suit in '86, and he died in 2000 at the age of 85.

Why Does Tim Burton Care?

He's a fan of Margaret's work. "Burton...owns an extensive collection of her work," Robert L. Brown of the Keane Eyes Gallery in San Francisco explained to The Hollywood Reporter.

It's not difficult to see the influence of the Keane eyes in Burton's films. "The Nightmare Before Christmas" has Sally. "Beetlejuice" is filled with wide-eyed characters. Even Burton's Willy Wonka sported some optical oddities. The trailer for "Big Eyes" above shows a bit less whimsical a universe, but Burton's dark humor shines through. Take a look and let us know your thoughts in the comments.