Margaret Atwood is a speculative fiction writer, poet, literary critic and environmental activist. Best known for her Arthur C. Clarke Award-winning classic The Handmaid's Tale, her more recent work includes a trilogy centered on a climate change-induced dystopia, and a collection of fantastical short stories, Stone Mattress: Nine Tales. She spoke with The Huffington Post about her latest collection, the dark side of social media, and the difficulties of writing male characters:

You're active on Twitter, but I've read that you’ve become disenchanted with social media.
For me, the pluses outweigh the minuses. But we all know about the dark side. Everything has a dark side. Things can get going that aren’t true and unless they’re countered right away people believe them. We know about Internet bullying. So that’s the dark side.

Usually when people invent something they don’t know what the dark side is. Typically with any new technology, there’s a lot of enthusiasm at first because people think of the positive things it can do, and then there are unintended consequences. Whoever invented the Internet wasn’t thinking, “this is going to cause a teenage girl to kill herself.”

The other issue, of course, is there’s a huge army of hackers out there and they’re trying to get ahold of people’s stuff.

Do you anticipate that getting worse?
Not now that people know about it. I think at first people had the quite wrong idea that they can say whatever they liked online, and it somehow didn’t count as slander -- they didn’t get it that it was publishing, like any other form of publishing.

We don’t do anything radically new, but we find new ways of doing the things that have always been done. To find a list of those things all you have to do is look at the characteristics that were once given to gods. Those are the things we want: flying through the air, teleportation, being able to spy on people without their knowing it.

Right. It seems like these mythologies -- and speculative fiction -- have a history of being optimistic, but now...
It changed after the First World War. That was very discouraging to a lot of people. It wasn’t far away or distant in the past, it wasn’t people who weren’t like us, it was Western Europeans slaughtering each other. So what becomes of your claim of having an advanced civilization, and what becomes of your claim of being a superior kind of person? It goes out the window. 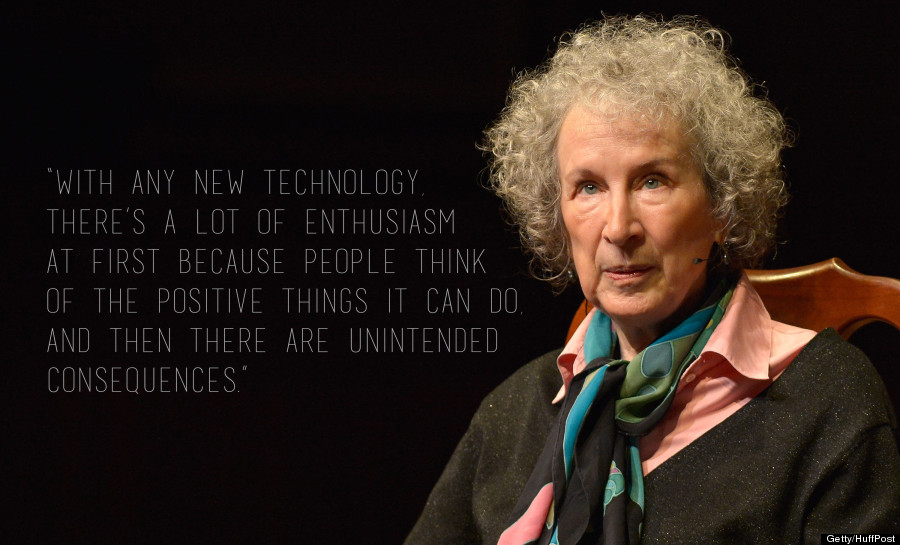 The first story in your latest collection is about a fantasy writer who gets the attention of an academic. Do you think fantasy and other genres are becoming destigmatized?
I’m not sure fantasy was ever stigmatized as a genre. There are all sorts of people teaching this stuff now. Folklore caught on as a serious study in the early nineteenth century, that’s why we have Grimm’s fairy tales. First it was serious folklores, and fantasy basically is the fairy tale motifs built out into more developed universes.

Genre is a bookstore problem. Lots of people have said this. They want to know where to put it on their shelves. It didn’t used to be that way. I think once people realize what they’re reading they can’t say you’re a bad writer. Nobody can say Ursula K. Le Guin isn’t a good writer.

I’m interested in what’s done and not done in genre novels -- I’m interested in watching that change. Often you will get somebody taking an established set of memes and then just blowing the hell out of them. Brokeback Mountain took the Western and blew it up.

I went to university in the late '50s, early '60s. The big subject then was mythology. The big guru was Northrop Frye, and he said to read everything, and he also always said to let children read what they want to, don’t force things on them. Boys, for instance, who didn’t like books because what they were given was something that wasn’t very boy-friendly, loved Stephen King. We have Stephen King to thank for a lot of our adult male readers.

And that’s the same conversation happening with the Percy Jackson series right now.
Yes, and [young readers] will or they won’t see these books as gateways into other books. Harry Potter, blah blah blah. It put a lot of kids onto reading; it made reading cool. I’m sure a lot of later adult book clubs came out of that experience. Let people begin where they are rather than pretending that they’re something else, or feeling that they should be something else.

Speaking of genres -- I’m a big fan of the MaddAddam trilogy, which is now being called “climate fiction.” Would you categorize it that way?
I don’t even call it climate change, I call it “the everything change.” It’s a change of everything. We think climate and we think, more clouds, more rain, oh, who cares. The everything change can never be the front and center of a book because it’s not a human being. It can be something people talk about, something people undergo, something that impacts how people live.

That’s true about the MaddAddam series -- Jimmy has to go back in time to remember when there were seasons. Jimmy, not being a person of deep thought, doesn’t dwell on it. He just thinks his parents’ stories are boring.

I hedged a bet in writing that book because I didn’t talk about a lack of atmospheric oxygen -- if I’d left it in, there wouldn’t be a story. It’s been very interesting to me to see climate change more from the margins of the conversation -- it was already known about in the 50s. But we’re programmed to think in the short term and get from today to tomorrow rather than from today to 50 years from now.

When you say “we” do you mean ...
The human species. Homo sapiens sapiens. Not many people spend endless hours wondering what will happen in 75 years when they themselves will be dead. Yes. Our usual approach is to pretend that nothing’s happening until it’s happened, and then react to it. Some people suss it out; some Jewish people got out of Nazi Germany because they saw it coming. Everybody else said, “Oh, it won’t be so bad, surely they won’t do THAT.” We’re doing the same thing now: “Surely such and such won’t happen,” but I think Hurricane Sandy caused a lot of alarm. There’s a lot more town-level and city-level action being taken -- not so much at the state or federal level. 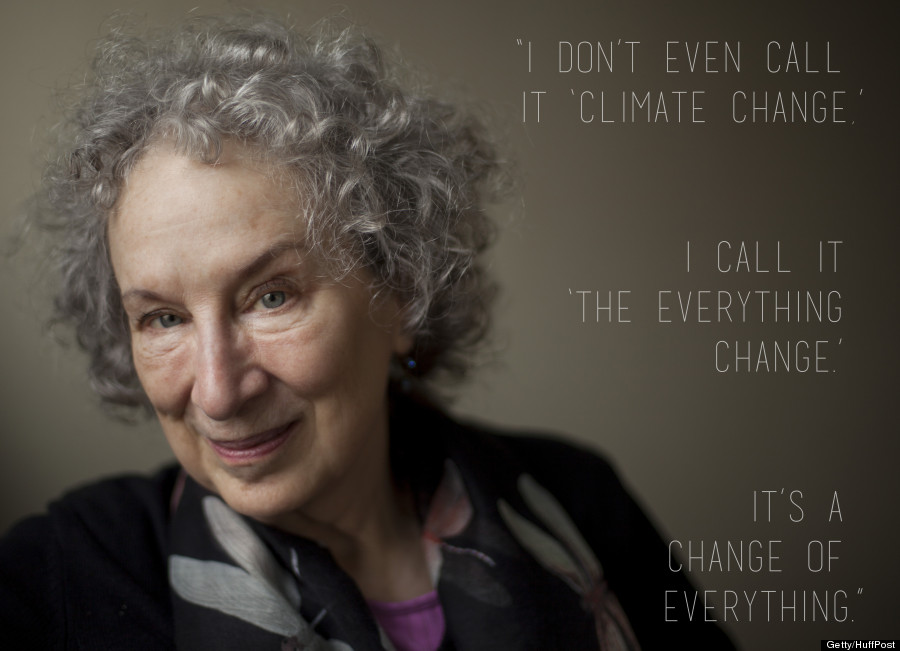 Will climate change be in the background of most of the stories you do in the future?
I wouldn’t say that. It’s in my life. I don’t consider my fiction work my only window on the world. If I were supporting a kidney foundation I wouldn’t have to have kidneys on every single one of my stories.

So we did have a big ice storm in Toronto -- that’s what kicks off [my new story] “Alphinland” -- and there’s all this talk about how people are kind of excited by it. The people on the television weather channel are having the time of their lives -- “Whoa look how bad it’s getting!” “They’ve got a half-frozen dog, how cute!” That’s what it’s like, and it’s not me making it up, just turn on the TV.

Are there other climate fiction authors you're enjoying right now?
I don’t pick authors by themes. Right now I’m reading The Blazing World by Siri Hustvedt, which is about the art world in New York. It’s pretty funny. And I’ll read any old zombie apocalypse story. I’ve got "The Walking Dead" in more or less the box set -- that’s how I like to watch things. It’s dangerous, you think, “just one more!”

As for fantasies, there are a number of interesting worlds. World of Warcraft, for example.

Yes, I played that growing up! -- an elf, with a bow and arrow.
It is amazing how the bow has remained the female weapon. Archery was of course big in Victorian England -- it’s in Daniel Deronda. Gwendolen is good at it, and that’s how she catches the eye of the man who would marry her, and the reason is you have your corset on and -- it’s very form-revealing. You weren’t running around, you weren’t showing your big, hairy legs, you didn’t get sweaty. It’s ladylike. Then of course in Narnia the girls have bows and arrows.

So you don't always mix your activism with your fiction. I wanted to ask about explicit versus implicit activism in writing -- is there one form that's more effective?
There are no rules. Some readers won’t like it if there’s a sermon right up in front of your face. Other readers will. People did it in the 19th century all the time: Oliver Twist, Nicholas Nickelby.

Choose your poison: Some people can’t do that, others don’t want to do that, others do want to do it. If you’ve studied creative writing at college you’ve probably been given some rules, but actually there aren’t any. The only rule is this: you shall make it so that the reader keeps turning the page. Otherwise your wonderful message you put on page 232 -- they’ll never get there.

You’ve written so many varying types of stories about such varying characters. I’m curious, do you approach writing about men differently than writing about women?
I show my male characters to men. When I wrote Life Before Man, I showed it to a man who gave me a few good hints, and one of them was really obvious, but you wouldn’t know it unless you were a man: You can’t shave off a beard with an electric razor. It makes sense once you think about it!

It’s like men writing women; they have to have a woman tell them, “you don’t put on pantyhose by opening them up and jumping into them,” and “why does this character not even think about getting pregnant?”

For Jimmy in Oryx and Crake, I asked a man about that age who had some commitment problems to read it. I got two hints: Number one: “Don’t say ‘what in the fuck,’ say, ‘what the fuck.’” Number two: "That’s not how you smoke a joint." 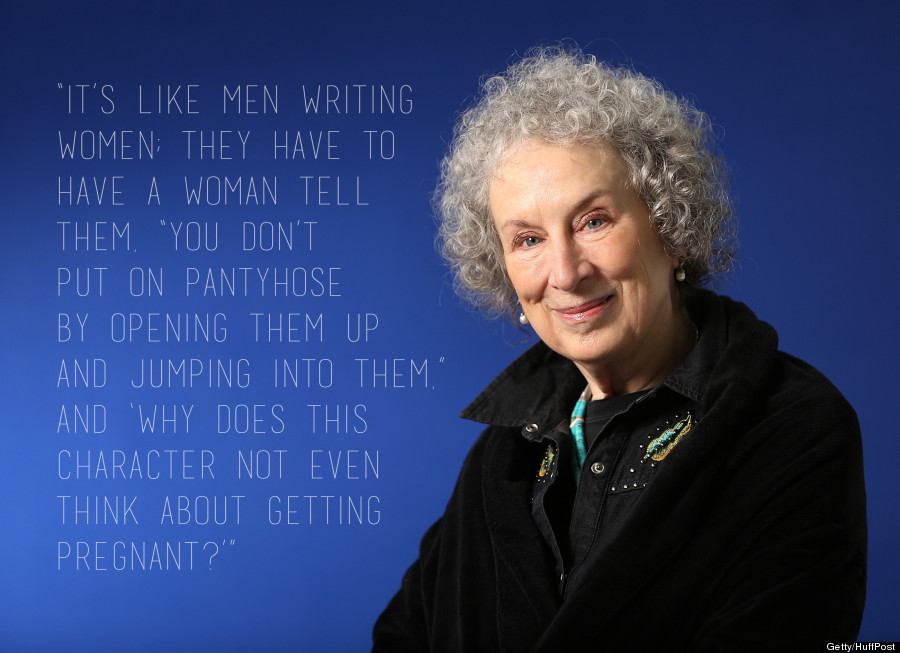 Do you think our reverence for those sorts of writers has gone away at all?
They’ve now become period pieces. There are a lot of guys that are philanderers and serial-girlfriend people, but Gavin is grumpy in a particularly generational way. He’s aggressively grumpy. The motifs are the same -- lots of girlfriends, cheating, getting people to support you, knocking down women. But I think a millennial would approach it differently.