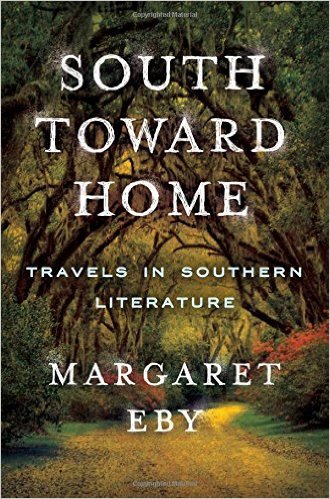 Margaret Eby's new book, South Toward Home: Travels in Southern Literature, is part history, part criticism, part travelogue, and part memoir. Her stories of visiting the places that were important to Southern writers are as evocative as the fragrance of magnolia blossoms, but honest in depicting the persistent combination of "gentility and virulent bigotry" that pervades Southern heritage. And she describes how, in some cases, the fiction became its own truth as communities created what the writers imagined.

Eby grew up in Alabama, and she understands the fierce attachment writers have to the specific details of the South. Her book describes her visits to the places that were important to canon authors Eudora Welty, William Faulkner, Richard Wright, Flannery O'Connor, Truman Capote, and Harper Lee and to more recent writers John Kennedy Toole, Harry Crews, Barry Hannah, and Larry Brown.

You mention a Southern "fondness for weirdos." How are Southern weirdos different from, say, weirdos in New York or California, also known for idiosyncratic characters?

To borrow and butcher a line from Faulkner, there are weirdos everywhere, at all times. What I think makes the characters in the South different has to do with the communities there. A common saying in the South goes something like, "everyone has a crazy uncle, but here we let them sit on the porch and tell stories."

There's truth to that, I think. There are all kinds of eccentric characters in New York and California and elsewhere, but there isn't as much of an imperative to stop and listen to them, or foster them in some way. There are exceptions, but in New York, you generally do your best to avoid them. In these smaller Southern towns, eccentricity is perhaps rarer, just because the population is smaller. There are a few in town and you know where they live and their habits. Faulkner was a weirdo in his time: His Oxford neighbors nicknamed him Count No Account, and told their children to avoid him when he'd been drinking. Plus a good weirdo in your social circle is a source of gossip, which is an art form I've found Southerners excel at, myself included. There's just a delight in passing on a good story, so you come to cherish--or at least entertain--the source of them.

Many of the writers you describe wrote memoirs or autobiographies (with, as you point out about Harry Crews, some fictional elements) as well as fiction (with some elements based on real places, characters, and events). How do the works of fiction and nonfiction differ in approach or voice?

One of the questions at the heart of this project was something like that: where do fiction and nonfiction overlap, and how does it change the way you look at a place? Because there is place in fiction, sure, but also to a degree places are fictions; they're acts of collective imagination. There's the physical location of Monroeville or New Orleans, of course. But the way we as a culture think about those places has everything to do with stories, both fiction and nonfiction, that shape our expectations. So when I think about New York City, I don't just think about my lived experience here, I think about Walt Whitman's "Crossing Brooklyn Ferry" and "Home Alone 2" and Lou Reed, all these cultural touchstones that we use to navigate.

Even the memoirs that I talk about in South Toward Home, Richard Wright's Black Boy and Harry Crews' A Childhood, are reconstructing a real place from their own imagination, from the imprecision and subjectivity of memory. Wright was writing, beautifully and achingly, about a family home that no longer exists, and a Memphis that, because of the passage of time, was different, however slightly, than the one he lived in. Crews' Bacon County had disappeared long before he memorialized it in A Childhood. I don't think you can ever fully separate those two approaches.

Do you have a favorite literary description of a Southern landscape or vegetation? Or climate?

I often think about the passage from the beginning of To Kill a Mockingbird that so aptly describes the Alabama heat: "Ladies bathed before noon, after their three-o'clock naps, and by nightfall were like soft teacakes with frostings of sweat and sweet talcum." All of August down there you feel like a soft teacake. Eudora Welty's descriptions of flowers and vegetation are equally wonderful. She told Susan Haltom, who helped restore Welty's garden after her death, that seeing the camellia bushes in bloom on a night with a cold snap was like watching a ship do down while the band was still playing.

You point out that Southern literature both perpetuates and punctures the region's favorite myths about itself. What are some examples?

Just about every writer in this collection would chafe at being called a "Southern writer" instead of just a "writer." No one wants to have their work qualified, I think, or to be put in a neat little box labeled "fried chicken & banjos & alligators here." If you gave a cursory reading to the writers in South Toward Home, you could just see certain buzzwords about the South and decide that these books are just about the South as a region apart, where manners still mean something and tea comes sweet or unsweet, not iced or hot. Many of those themes do exist in these works, but they're counteracted by a kind of specificity, about the way that those stereotypes don't hold up if you actually take a hard look at them instead of being content to accept them as fuzzy truths.

Eudora Welty is a great example of that. She has a reputation of being this gentle short story writer who documented the South very politely--Diana Trilling once witheringly described her prose as being "on tiptoe." But if you actually look at Welty's work, it's all about interrogating that politeness and finding the hard, sharp things underneath it. Her story "Where is the Voice Coming From?" which she wrote after the assassination of Medgar Evers, is just devastating.

You describe a wide variety in the levels of recognition and resources for the authors, from the extensive William Faulkner and Eudora Welty materials and artifacts available for scholars to the little that exists for Richard Wright and John Kennedy Toole. What would you like to see the communities and fans of the work do to better recognize the authors of the region?

You can't do a survey of Southern literature, and of writer's homes in the United States more generally without running up against the question of who is included and who isn't. Richard Wright had to leave the South with its brutal Jim Crow laws to get his work done, and until fairly recently, there wasn't much mention of him in Mississippi's literary tourism. You can't help but think about the potential writers whose voices were silenced, and whose work isn't celebrated.

I think we could do a great deal more, not just in the South but as an entire country, to celebrate the work of people of color, and recognize their enormous contribution to our literary culture. Several of the chapters in my book are devoted to women--Flannery O'Connor, Harper Lee, and Eudora Welty--and there are many more excellent Southern female writers I deeply admire--Zora Neale Hurston, Carson McCullers, Ellen Douglas, Alice Walker among them. But they, too, are often left out of the conversation.

"To Kill a Mockingbird" is a rare film adaptation found satisfactory by the author. Are there any other film versions of the novels and stories you read for this book that you think do them justice?

Is it cheating to mention "Breakfast at Tiffany's"? But sure, the 1949 adaptation of Intruder in the Dust does a very good job, and Faulkner himself gave it the seal of approval. John Huston's Wise Blood has a different flavor to it than Flannery O'Connor's book, but I think it's excellent. O'Connor didn't live to see it, alas.

It's also interesting that many of the writers in the book had a hand in the movie business in one way or another. Faulkner worked with Howard Hawks, and Barry Hannah tried his hand at screenwriting with Robert Altman, though he deemed himself "not a good screenwriter." Harry Crews had a little role in Sean Penn's "The Indian Runner" and went alligator hunting with Rip Torn.

If your home was ever made into a museum about your work as a writer, what would you want to make sure it included?

My books! The contents of writers' homes as museums depend on all kinds of things, including who's upkeeping them, where their funding comes from, and what assets were divided how. Some of them don't look like anyone could have ever actually lived there, at least no mere messy mortal who used things like toothpaste or cooking oil. One of the most fun to visit has to be Eudora Welty's house, in part because of the generosity of her nieces, who donated many of her knick-knacks back to the Eudora Welty Foundation and thus allowed them to be displayed. But it's always the most satisfying when you get to look through an author's bookshelves and have that little thrill of recognition when you see one that seems well-loved, that maybe you love too.