A married grandma of 14 faces six months behind bars after she had public sex with a man who was not her husband at a public pavilion in Florida.

Peggy Klemm, 68, and her 49-year-old copulation co-conspirator, David Bobilya, were sentenced Wednesday after their romp at Lake Sumter Landing Market Square, Click Orlando reports. Apparently, a retirement community there called The Villages, which houses 100,000 people, is known for its wild nights, $3.75 cocktails and public sex.

Klemm likely got arrested because she was on probation for a previous reckless driving charge, the Daily Mail reports. She was slapped with six months in jail when she took a plea deal for the public sex.

Klemm and Bobilya were caught with their pants around their ankles having sex against the Bait Shack hut at 10:30 p.m. on June 12. 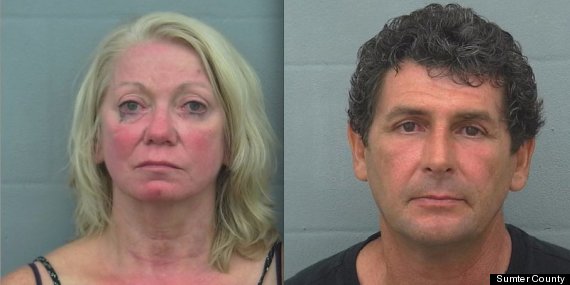 She stood in front of a judge on Wednesday and mouthed "I love you" to her husband of 50 years, Frank Klemm, who stood beside her despite the philandery.

"She is a super woman as far as I'm concerned," he told Click Orlando. "And she deserves a second chance. That's all I have to say."

She apologized through tears as she walked out of court. She'll get credit for time served and has 135 days left to her sentence. Bobilya is also serving a six-month sentence.

And when she gets out, there's a drink waiting for her. The Daily Mail reports that the Red Sauce bar in the retirement community is making bank with their new cocktail, Sex on the Square. It's a rum, coconut and cream delight, with a cherry on top, and it costs $3.75.