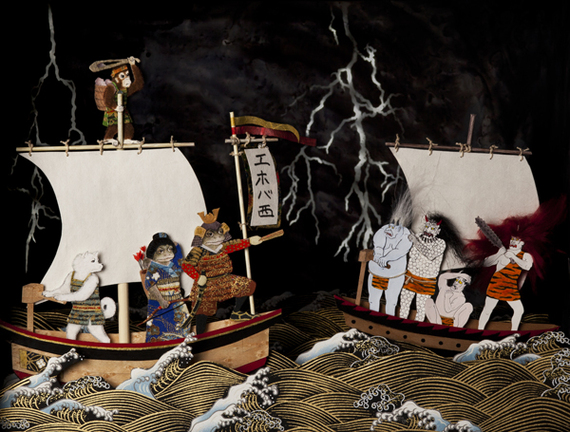 Art history, ecclesiastics, fabulism and a profound delight in materials conspire in the studio of Margaret Ouchida. Her engrossing mixed media light-and-shadow boxes (which she calls "box animation") tell many kinds of universal stories -- art history, folklore, scripture and children's literature. But the real story is more fundamental still, and that is the story of her relationship to her craft; and her desire to transcend artificial, unhelpful boundaries between genres and techniques in order to arrive at a more intimate and expansive understanding of what inspires an artist. "I don't want to be boxed in," she says, no pun intended, "to working in just one medium. I am captivated by so many materials, and I want to move between them intuitively." Nevertheless, the stories she interprets in this way do carry compelling meaning. It's the wonderment and patiently detailed way in which Ouchida negotiates between form and idea that gives her work its joyful life. 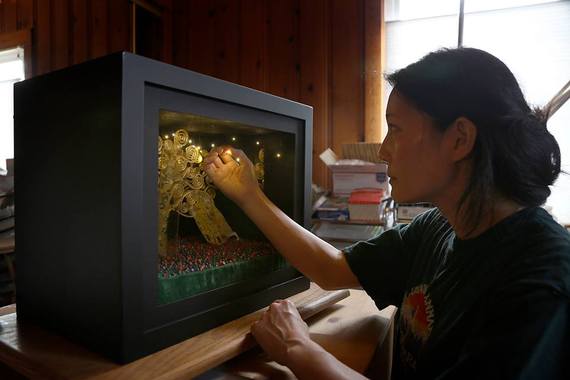 The works in Stories, Legends, and Realms offer a comprehensive overview of her practice, as each articulates an aspect of her inspirations and methods. "We Will Not Bow" is a 5-panel piece, a row of one-inch deep light boxes, whose images are built on acrylic backings of watercolor, colored pencil and lighting gels. A blue sky is variably saturated according to the elapsing time of day. An expanse of bright, hot desert sand is punctuated by figures and stone structures in both the foreground and far distance. It's clear from the gestures and costumes that a religious parable is underway; and in fact it is based on the story of three men who were miraculously saved from a fiery death at the hands of King Nebuchadnezzar, having refused to worship a false god as directed. "It's one of my favorite Bible stories," says Ouchida. "Plus I really wanted to recreate fire in a piece!" Expertly deployed cellophane, vellum and fans create a convincing special effect of smoke and fire -- and better still, she organized a narrative sequence in which those elements move the story.

"Rendezvous II" is a rare single-panel piece depicting a meeting between a princess and a unicorn. While different in tone, it is made the same way and thus speaks to the range of themes treated in her style. As with "We Will Not Bow," it is clear that it's the atmospheric effects where she strives for realism -- and the figurative drawing is free to remain stylized, nearly pre-Raphaelite in its expressive flatness, allegorical in a sort of literary/educational mode. To that point, the shadow box "The Wedding" (which is part of her toad-based universe, more on that later) employs different materials, techniques, content and visual style than the lightboxes. Yet in the same spirit, this and related works elaborate on her appreciation for novel tech and seductive materials -- and importantly, her affection for contextualizing those materials within her storytelling impulse. "The Wedding" is a theatrically-lit diorama featuring cut-paper lilypads, an orchestra band in silhouette and undulating water glass. The painted toad-bride's dress is a silk calla lily. It's worth noting that Ouchida's pets include a family of pampered toads, who serve as inspiration, models and muses in her art and writing. 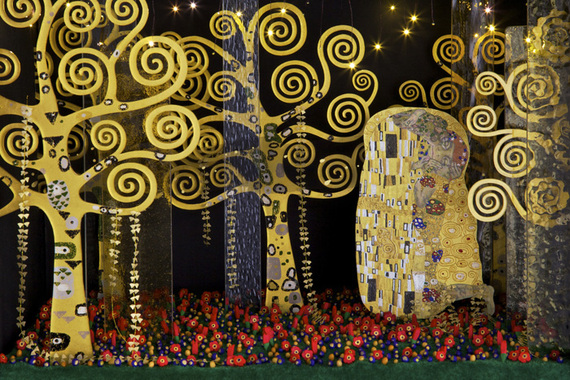 Speaking of, "T'ode to Klimt" is the first in her new "t'ode" series -- homages to art history in which protagonists are replaced by the aforementioned toads. Baudrillard said that "simulation is the ecstasy of the real," and when it comes to Ouchida's accomplishments as a matter of craftsmanship, words like labor-intensive, meticulous and painstaking fail. Based on "The Kiss," she's engineered a gilded grove with scores of elements including but not limited to: flocked grass, 1,400 clay flowers, twinkling LED stars, laser-cut trees and hundreds of paper leaves on dripping vines. "It's like copying a Master," Ouchida explains. "You get to work in their palette, but it's not a copy; it's something much more than that." It's a new life for an old legend. It's a t'ode.