The buzz at Cannes is that Margarethe Tiesel, the lead in Ulrich Siedl's Paradise: Love, may take the Best Actress award for her exuberant vulnerable performance as the dumpy woman who comes to Kenya to pick up beach boys, in need of sex and love.

Her most memorable scene: when she is teaching an African boy how to make love to her. "Not so much tongue in mouth. Not at first. First just a little."

The Beach Boy's response: "But this is Kenyan kiss. Not good?"

"No, tongue no good. Just a little tongue, just a little. At first. Then rest of tongue okay. And please, first touch one breast THEN the other. Not both at once. Wait, wait. I show you."

Another great scene is when she, shaken by rejection, thumps through the sea up to her waist until she finds her lover Peter, with his wife, and she whacks him in the head.

Throughout the film, she alternates between an open joyfulness and a vulnerable awareness of being old, ugly and alone.

The actress and I sat together on beach chairs on the terrace of the Marriott overlooking the Cannes bay. As exuberant and charming in real life as she is on film, Margarethe confided that she had been doing theater all her life, although since she has had children, she has taken fewer roles than her husband, a fellow actor: hence she was delighted to be back at the fore, at Cannes.

She whispered, pointing to a jolly balding man next to us: "Do you mind if he is with us? My English," she laughed. "Not so exact. He can translate."

"My questions not so exact either," I said, as Martin grinned and stood next to us.

It was a delicate question that I wanted to ask her, and I did not know quite how to phrase it myself.

In the film, the director has Margarethe play one of five ugly fat women. In many scenes, the camera lingers on her naked body, on the sagging breasts and wrinkled legs, in a way that underscores how far from ideals of beauty her character is, despite her coquettish hopes to hook an African boy.

Wouldn't it feel painful, for a woman, to be filmed deliberately as unattractive?

"No it is not painful," Margarethe said with triumph. "Because I am not proud!"

"When I was very young, I always wanted to play the old woman. It would bother other women more than it does me."

"So it doesn't bother you at all that the camera ridicules your fat?"

"Okay, okay, a little bit," she squeezed her forefinger and thumb together. "But if you work with Ulrich Seidl, he does not prettify things. Ulrich has so much respect."

"And you too have respect. What is original about your performance is that you managed to be dignified and undignified at the same time."

In fact, every woman over fifty at the press conference the day before had stood up, moved, to share how much Margarethe's performance meant to them. Her work created a rather feminist fervor, in a context which is usually quite male. One journalist added to the comments of another journalist by calling her a "Co-sister."

The basic line was that they loved how she showed the vulnerability of women of a certain age and their fear of losing their attractiveness to men. One noted that her performance gave voice to what is usually not spoken about: how older women suffer from the need to still be loved, and made love to.

"Oh good!" Margheirte exclaimed, and squeezed my hand. "Because I want to play this role for all women." She pointed in my chest. "I do this for YOU."

"You yourself, then, have escaped the pressure of worrying about getting ugly?"

"Well," she touched her heart. "It does not bother me as an ACTRESS to be ugly. As an ACTRESS, I have escaped. But as Margarethe, yes, I have a pang. I think, maybe I should go to the gym. I think: look at this," she pinched her ample waist. "But it is not too late!' She chortled with her fresh laugh. "And I try not to make it bother me. I -- how does one say -- come to terms. I don't know if I really have come to terms, but since I try, I have a 'little bit', and that is enough. My body feeling is better now."

"You mentioned you have a daughter. Is she free from female body concerns??"

"Oh no! She too -- she too is always worrying if she is fat, if she is this, or that, when of course she is not. Women are never free..."

We each squeezed his stomach. "No, it's muscle," we concluded.

Later, Margarethe spotted me getting a massage from the official German translator on a lounge chair.

"Hey! He gave you a longer massage than he gave me."

"Because I needed it," I quipped.

She ran over and gave Robert -- the best translator at Cannes -- a hug: "I will yell at him about it. He is my beach boy!" 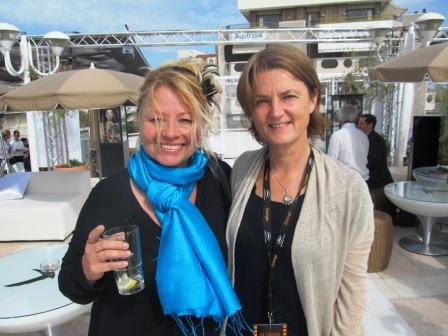