Margarette Kirsch, 84, has always wanted to live on the wild side. And thanks to "Ink Masters," Spike TV's reality television show for tattoo artists, she's got ink to match.

Kirsch is now the proud owner of a 6" x 11" tattoo of a flaming phoenix on her back, courtesy of contestant Katherine "Tatu Baby" Flores, Tampa Bay's 10 News reports. The octogenarian was flown out for three days and three nights for the filming, and spent close to six hours getting her tat.

This isn't Kirsch's first brush with adventure. As a participant in the Twilight Wish Foundation, a group that grants older people's lifelong wishes, Kirsch went on a cross country road trip from Florida to California in an 18-wheeler two years ago. (Her first choice was becoming a Vegas show girl, but Twilight couldn't make it happen for the sassy firecracker.) In fact, Spike TV found out about Kirsch through the organization.

"I've always been adventurous," she says, "and I've always thought, 'Well, if you don't do it while you're still living and enjoy it, there's no need in trying to do anything."

To see her tattoo -- and to hear just how she dealt with getting tatted up at 84 -- watch the video above. 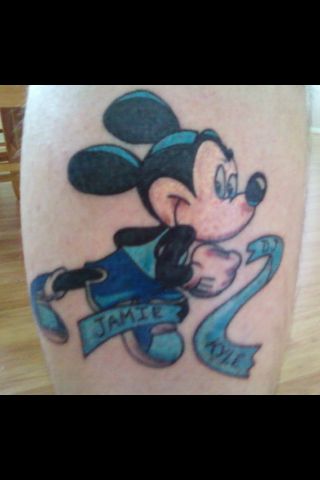 1 / 9
"My husband took up running -- especially Disney marathons -- about four to five years ago," writes Mary Helmick. "He has this tattoo on his calf with our kids names intertwined."
Courtesy of Mary Helmick