Margot Wallström, you are one of Sweden's top diplomats, and internationally renowned for your work in global affairs. During your tenure at UN you made us proud and became a voice to unheard women in the world who were abused, raped, and tortured. When you became Sweden's minister of foreign affairs, you fought for a seat at the UN Security Council, and when Sweden won we asserted a unique position internationally.

Five months ago the European Parliament (EP) denounced the atrocities against Assyrians/Chaldeans/Syriacs, Armenians, Yazidis, other non-Muslims and Muslims alike, such as Shia, as genocide. The EP also called for action and for a referral of these criminals to the International Criminal Court (ICC).

However, today, five months later, this action has yet to be taken. Instead we are witnessing terrorist acts all over the world by the same monstrous sect as the ones trying to wipe out the indigenous people of Iraq and Syria.

The EP resolution was written by Lars Adaktusson, a Swedish MEP, so it's not an exaggeration to say that Sweden also played a role in the recognition made by the US House of Representatives, US Secretary of State, and, for example, the UK House of Commons.

Margot Wallström, you have now a chance to make us Swedes even more proud: There is evidence to confirm that ISIS has committed acts of torture, mass murder, kidnapping, sexual enslavement, systematic rape and sexual abuse of girls and women, predominately belonging to religious and ethnic minorities in Iraq and Syra. ISIS has documented its specific intent to destroy Assyrians/Chaldeans/Syriacs, Armenians, Yazidis and Shia Mulims such as the Shabaks and the Turkmens.

In response, the UK, the US and Russia have commenced military intervention to stop ISIS, therefore it is likely that a resolution targeting ISIS and referring the crimes committed by ISIS to the International Criminal Court (ICC) would be welcomed at the UN Security Council.

The UN Security Council was specifically established to maintain international peace and security. This role cannot be fulfilled if they remain silent, respond inadequately, or take action too late in response to these reports of genocide.

The ICC was specifically established to investigate and prosecute genocide, crimes against humanity, war crimes, and crimes of aggression. However, if the ICC continues to rely on the argument of "too narrow" jurisdiction, the ICC will become an empty symbol of justice. 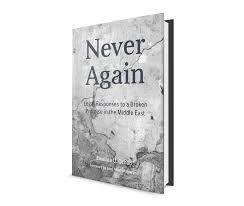 To learn more about how this steps work in practice, ADF International, a NGO which focuses on atrocities against Christians, has released a book called "Never Again" written by their legal counsel Ewelina Ochab. The book illustrates the proper steps necessary to stop the genocide and prosecute the perpetrators. What the author advices the UN Security council are two different approaches to the situation in the Middle East. First, it could establish a commission of experts on genocide for the Middle East to consider the available evidence, collect further information and prepare an opinion. If the commission confirms that the atrocities amount to genocide, the UN Security Council would likely pass a resolution establishing an ad hoc criminal tribunal.

A month ago, the Independent International Commission of Inquiry on the Syrian Arab Republic (the Commission of Inquiry) released the report "They came to destroy: ISIS Crimes Against the Yazidis", recognizing ISIS atrocities against Yazidis as genocide. This is a major step forward as the commission is the first UN body to clearly brand ISIS atrocities as genocidal. The commission indicated that they managed to collect enough evidence to help with future prosecutions.

This is also something that should be done in relation to other groups persecuted by ISIS as well. As far as genocide is concerned, each case (in relation to each protected group) has to be considered individually. Therefore, the next steps would be to ensure that the commission or any other UN body considers the atrocities committed against other ethnic and religious minorities. The report of the commission called upon the UNSC to refer the situation to the ICC or to establish an ad hoc tribunal. Additionally, convening and supporting prosecutions on the National level would allow victims in countries such as Iraq, Syria, and others to seek justice and restitution for the atrocities which they have suffered.

A portion of the commissions report was presented at the UN Security Council on June 23rd, however no indication was made whether the steps to bring the perpetrators to justice will be undertaken.

Sweden will be at the UN Security Council in 2017-2018 (as a non-permanent member). Author Ewelina Ochab:

Throughout history Swedes like Dag Hammarskjöld, Secretary-General of the UN from 1953-1961, and Raul Wallenberg, a Swedish diplomat known for saving thousands from being killed during the Holocaust, have shown great courage to make the world a better place. They showed that Swedish people can be leaders for justice. Margot Wallström, you have been given a unique opportunity to stop a genocide and bring the perpetrators to court and grant the victims justice. I urge you to seize this historic moment.

*Here is a link to the youtube playlist with the speeches from the Book Launch. Among the speakers were Swedish MEP Lars Adaktusson, Spanish MEP and former lawyer at the International Criminal Court, Javier Nart and Ján Figel, Special Envoy for the promotion of freedom of religion or belief outside the European Union.