María Belén Chapur has been identified as Mark Sanford's alleged mistress. Some outlets ID her as Maria Belen Shapur with an "S." Politico links to an Argentinian outlet that identifies the mother-of-two.

(VIDEO AND PHOTO BELOW - SCROLL)

The media has been camped out by her apartment building near the Buenos Aires zoo. Maria Belen Chapur is 43 and has the two sons from a previous marriage.

Maria is described by a neighbor as a beautiful brunette who plays tennis, goes jogging, and has large eyes. It was previously, erroneously reported that she worked for an agriculture company. 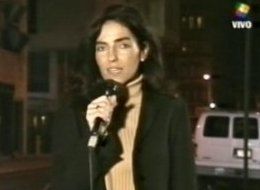 This much is known: Chapur worked as a journalist and translator of English for about a year for the Argentine television station Canal America, according to Gabriel Bartos, who was then a producer with Canal America. Bartos said that Chapur went to New York after the 9-11 attacks in 2001 to report for the station.

TMZ talked to a bar owner, who says he watched Sanford and Chapur kiss and cuddle over the weekend, and said Maria has green eyes, dirty blonde hair and a "banging body."

Emails published in The State also are addressed to a woman named Maria.

Blackbook has unsourced information that Maria Belen Chapur went to the "posh St. Catherine's Moorlands School in the preppy Belgrano neighborhood, then graduated from the stodgy Universidad Católica Argentina with a degree in (wait for it) International Relations."