Last week's interview with Maria Conchita Alonso started a firestorm across the blogosphere - and now protesters have moved against theaters showing the controversial film. Oliver Stone's latest flick South of the Border has thrown Americans from both continents into the rink to battle out their political ideologies over what's brewing in the Latin land down under.

Sunshine being the best disinfectant, it would have been a boon for truth if Stone had told the story of Venezuela's crime, poverty, and political impropriety but instead the Oscar-winning director has made a bumpy lackluster version of name-dropping unreality. Whether you side with Chavez or his opposition, by the omissions in Stone's film it's evident that the leader (and maybe even Stone himself) has a thing or two he doesn't want cameras - and the world's attention - to focus upon. By the end of the film, the elephant in the room ends up crushing anything left of Stone's shaky reputation for journalistic fact-finding.

South of the Border is more about Stone's hobnobbing rather than a complete picture of Venezuela through journalistic prowess. South of the Border is a travelogue of a red carpet tour across South America, and Hugo Chavez' jet seems to be the way the film crew gets around. It isn't reporting, rather a snapshot of a South America Stone contends is controlled by the United States and the IMF. Stone presents Chavez as a thorn in the United State's side -- Washington is getting her comeuppance rather than Venezuelans suffering under a devil of a dictator.

The response to this film enlivens Hollywood to her power to sway opinion and alter attitudes. From Kubrick's masterpiece Paths of Glory, to Fail Safe, and On the Beach, Hollywood has been a force in shaping change and conveying a hunger for a more evolved world.

It's a pity that Stone didn't do his homework on the legacy of Hollywood. He would have been well served to relish in Chaplin's bold stroke, The Great Dictator. In the 1940 film (shot throughout the late thirties) Chaplin calls Hitler on the carpet even as America was ignoring the despots atrocities. Seventy years later, the film is a strong testament of Chaplin's insight, compassion, and directorial genius. The Great Dictator is as a perfect benchmark for any Hollywood star taking on the cause celeb. Do your homework and stand on the shoulders of those who succeeded before you. In South of the Border, Stone isn't rising up on anyone's shoulder's -- he's simply kissing a tyrant's ass. 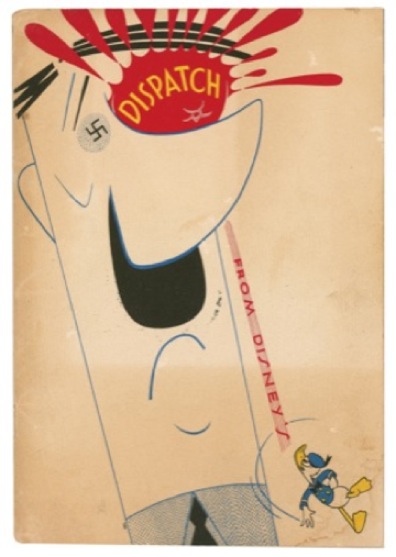 Walt Disney takes on Adolf Hitler in a pamphlet offered for sale this month at RRAuction.com