A woman has given birth to a 13-pound baby in Spain, the biggest baby ever born naturally in the country.

Maxime Marin, a 40-year-old British woman living in Spain with her partner from Colombia, gave birth to baby Maria Lorena Marin Wednesday morning at the Hospital Marina Salud in Denia, the Agence France-Presse reported. Maria was born naturally and weighed in at 6.2 kilograms, or 13.67 pounds. 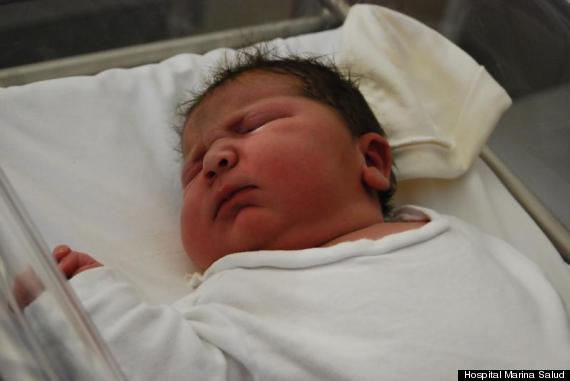 The mother said she knew her baby would be big, "but not that big," according to an announcement of the birth written on Marina Salud's website. Her other children each weighed well over 9 pounds.

"I did not even need an epidural," she said.

It was a milestone not only for Maxime, but also for the doctors who helped deliver the healthy baby girl.

"In my 40-year professional career I have never known of any case of a birth with this weight by natural childbirth," Javier Rius, the head of the hospital's department of obstetrics and gynecology, said. "We are all very satisfied with the work which we carried out."

This is not the only big baby born in recent weeks. Last month, a 13.47-pound baby named Jasleen was born in Leipzig, Germany, taking the title of Germany's heaviest ever born naturally.

Babies born weighing more than 8 pounds, 13 ounces, like Maria and Jasleen, are given the diagnosis of "fetal macrosomia." While there has been no scientific evidence of a definitive trend, but Dr. Shieva Ghofrany, an OBGYN with Stamford Hospital, told The Huffington Post in an earlier interview, that "babies have definitely been coming out bigger" in the last five to six years, which can be attributed to rising rates of maternal obesity and diabetes, among other factors. .

However, it is worth noting that the biggest baby ever born was a boy weighing 23 pounds, 12 ounces delivered on January, 19, 1879, in Seville, Ohio, according to the Guinness Book of World Records. He was born to Anna Bates, a 7-foot, 5.5-inch Canadian woman, and died 11 hours after birth.

No other newborn has tipped that scale yet, but here are several who have broken records of their own.

Heaviest Babies
Voting Made Easy
Register to vote and apply for an absentee ballot today
Register now
More:
Parents
Newsletter Sign Up
Raise the kind of person you'd like to know
Subscribe to our parenting newsletter.
Successfully Subscribed!
Realness delivered to your inbox