LOS ANGELES, March 7 (Reuters) - Russian tennis star Maria Sharapova, the highest-paid woman in sports, said on Monday that she failed a drug test at the Australian Open due to a substance she has been taking for 10 years for health issues.

One of her biggest sponsors, Nike Inc., said it was suspending ties while the case is being investigated.

She is the seventh athlete in a month to test positive for meldonium, which is used to treat diabetes and low magnesium, and was only banned by the World Anti-Doping Agency (WADA) as of Jan. 1.

"I made a huge mistake. I let my fans down and I let the sport down," said Sharapova, a teenage tennis prodigy who became the third-youngest Wimbledon champion. "I take full responsibility for it."

"I know that with this I face consequences and I don't want to end my career this way. I really hope that I will be given another chance to play this game," former world number one Sharapova told a news conference in a downtown Los Angeles hotel.

In its statement to put ties on hold that came just hours after the tennis star's announcement, Nike, the world's largest sportswear maker, said, "We are saddened and surprised by the news about Maria Sharapova."

The ITF's anti-doping program calls for a four-year suspension for a positive test, but that ban can be reduced in various circumstances, such as for first-time offenses or if the player shows no significant fault or negligence.

If a player bears no fault or negligence, there is no suspension.

According to Forbes, she earned $29.5 million in 2015, mostly from endorsements.

Sharapova said her family doctor had been giving her mildronate, which is also called meldonium, for 10 years after she frequently became sick, had irregular EKG results, a magnesium deficiency and a family history of diabetes.

"It is very important for you to understand that for 10 years this medicine was not on WADA's banned list and I had been legally taking the medicine. But on January the first, the rules have changed and meldonium became a prohibited substance."

WADA declined to comment until ITF issues a final decision.

Meldonium is used to treat chest pain and heart attacks among other conditions, but some researchers have linked it to increased athletic performance and endurance. It is listed by WADA among its prohibited metabolic modulators, along with insulin, and some researchers say it can also help recovery.

It is not approved in the United States but is available in Russia, Latvia and other countries in that region.

Sharapova is the most prominent tennis player to test positive for a banned substance in recent years.

Croatia's Marin Cilic was banned for nine months in 2013 after testing positive for a prohibited stimulant, though the suspension was cut to four months on appeal.

Former world number one Martina Hingis retired after receiving a two-year suspension for a positive cocaine test in 2007, though the Swiss denied taking the drug.

Sharapova is the biggest name in sport to test positive since New York Yankees baseball slugger Alex Rodriguez was banned for a year in 2013 after using performance-enhancing drugs and American cyclist Lance Armstrong was banned for life from racing in 2012 after a U.S. Anti-Doping investigation.

Sharapova, one of the most popular figures in global sports, has long been a favorite with her sponsors. Cosmetics maker Avon Products Inc declined to comment on its endorsements.

Steve Simon, CEO of the Women's Tennis Association, said in a statement he was saddened to hear the news.

"Maria (Sharapova) is a leader and I have always known her to be a woman of great integrity," he said.

"Nevertheless, as Maria acknowledged, it is every player's responsibility to know what they put in their body and to know if it is permissible. The WTA will support the decisions reached through this process."

The news came a day after Sharapova's management team said she was going to make a "major announcement," which had many speculating that she was going to announce her retirement from professional tennis.

Sharapova, who has struggled with a series of injuries in recent years, has not competed since she lost to Serena Williams in the quarter-finals of the Australian Open in January.

Renowned for her never-say-die approach, a gritty baseline game and high-decibel shrieking, Sharapova at 17 became the first Russian woman to win Wimbledon when she beat Serena Williams 6-1 6-4 in the 2004 final.

That victory also made her the third-youngest Wimbledon champion, behind only Lottie Dod and Hingis, and the fourth-youngest grand slam winner in the open era after Hingis, Monica Seles and Tracy Austin. (Additional reporting by Joseph Ax and Jon Herskovitz; Editing by Lisa Shumaker/Peter Rutherford/John O'Brien) 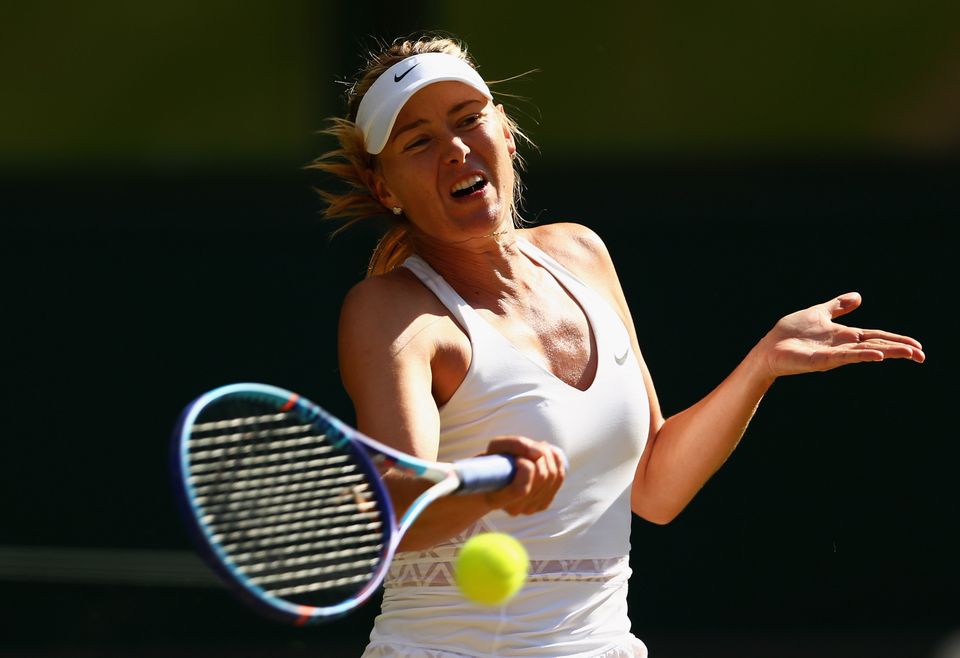 1 / 5
LONDON, ENGLAND - JULY 09: Maria Sharapova of Russia plays a forehand in the Ladies Singles Semi Final match against Serena Williams of the United States during day ten of the Wimbledon Lawn Tennis Championships at the All England Lawn Tennis and Croquet Club on July 9, 2015 in London, England. (Photo by Clive Brunskill/Getty Images)
Clive Brunskill via Getty Images