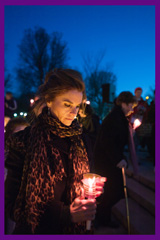 Maria Shriver: a march and candlelight vigil to raise awareness about Alzheimer's will begin her 2010 Women's Conference.

For Maria Shriver, a passion for public service and activism comes naturally. She is the daughter of Sargent Shriver, a Democratic presidential candidate in 1972 and the first director of the Peace Corps, and Eunice Kennedy Shriver, the founder of the Special Olympics and sister of President John F. Kennedy and Senators Robert and Ted Kennedy.

She follows in esteemed footsteps, but Maria Shriver has become a trailblazer in her own right. She is an award-winning journalist and bestselling author. Assuming the mantle of California First Lady in 2003, when her husband Arnold Schwarzenegger became the state's 38th governor, she took a leave from her job as a journalist for NBC News. Yet in her time away from a successful broadcasting career, Shriver has managed to transform the office of First Lady by approaching it not simply as a title, but as a powerful platform to make a difference, particularly in the lives of women.

For this year's conference, Shriver will incorporate another cause she cares deeply about, Alzheimer's advocacy. Leading a March on Alzheimer's and Candlelight Vigil on October 24, she hopes to raise funding and awareness about the debilitating disease, which currently affects over five million Americans.

Shriver explains that she wanted to begin the conference with a focus on service "because I was raised by two incredible servants of the public good, and I'm passionate about women and families. I'm passionate about Alzheimer's." The disease strikes an especially personal cord, as her father was diagnosed with Alzheimer's seven years ago. She says, "Back then I didn't know really anything about the disease -- I knew that President Reagan had been diagnosed, but that was really about all ... My brothers and I and my mother had no idea what our father would go through." When she tried to gather information, she found "a very bleak and dark landscape out there -- people didn't talk about it."

So Shriver returned to her own journalistic instincts to create and share information and resources about the disease, beginning with writing the children's book, "What's Happening to Grandpa?" Says Shriver, "I had written two previous children's books about issues that people found difficult to talk about [on dealing with death and mental disabilities]. And it was a way to really process for myself the diagnosis of Alzheimer's."

Her children's book led to "The Alzheimer's Project," a four-part documentary she produced on HBO in 2009 accompanied by a website, DVDs and printed materials. Shriver says that the documentary has become HBO's "most successful and biggest television event ever with over nine million media impressions." She adds, "I think that was a big turning point for Alzheimer's. It coincided with the increase in numbers and brought an issue out of what I would call the 'dark room' and into the living room." In 2009, Shriver testified before the U.S. Senate Special Committee on Aging, offering advice to families and caregivers who are affected by Alzheimer's.

The March on Alzheimer's (at which Leeza Gibbons and Peter Gallagher will emcee and Jane Fonda will warm up marchers with stretching exercises) also allows Shriver to spotlight the connection between women and the disease. "Seventy percent of the people who develop Alzheimer's are women, and the vast majority of the people caring for people with Alzheimer's -- and mind you Parkinson's, Huntington's, stroke victims -- are also women." Coinciding with this year's conference she will also be releasing "The Shriver Report: A Woman's Nation Takes On Alzheimer's," which is a new installment following up last years groundbreaking study on women as half of U.S. workers.

Focusing this year's report on Alzheimer's reflects her belief that "this disease needs more money, more conversation, more adjustments by all of our leading institutions than perhaps any other in American life." The disease disproportionately affects women "not just as the person living with the disease, but women are the primary caretakers of the elder generation." As both caregivers and patients, she says, "we need help! We need help from our businesses where we work, with flex hours. We need help from our government, which is the largest employer in the nation. We need to have a conversation and ask 'where are our priorities?'"

For Shriver, it's part of another important dialogue: a "national conversation about aging," observing that "we don't know, and particularly women don't know the right way to age." She says, "We're told what maybe we should wear in our fifties or sixties or seventies, but not how we should act, how our brains will work." Shriver also believes that further studies of the brain are necessary, calling the mind "the new moon." She adds, "If President Kennedy could launch a space program to explore space and land a man on the moon, we should be launching a program, to launch the clues, the answers, to the human brain." The next frontier involves "how we think, how we remember, how we love, how we process information." The answers to these questions, and to Alzheimer's and many other diseases, "are inside the brain and the mind. I am interested in all of those subjects and how they interconnect."

Shriver, who says she is also a big believer in "allowing people to change," will be facing a major life transition herself when her husband leaves office at the end of the year and she ends her First Lady stint, though she will certainly continue to use her powerful voice to mobilize and inspire women. "The goal of the Women's Conference, under my direction, has really been to empower women to be architects of change. If you want to be an architect of change by raising great kids, God bless. If you want to do it by raising money for your kid's school, great. If you want to build a garden -- whatever it is."

Shriver says, "Women like myself -- they're complicated, and they have a lot of different interests and qualities within them." She adds, "Women somehow get portrayed as one type. You're either a feminist or you're not. You're a working woman or you're not. I'm raising two girls, and I say to them, 'I need you to be strong and soft. You can be smart and beautiful ... You can be all of these things.' The more we give each other examples of that, the more honest we are with each other, the little bit easier it is to use your voice and step out."

For more information on the March on Alzheimer's and to register online, click here. To read Marianne Schnall's extended interview with Maria Shriver, click here.

This article originally appeared at The Women's Media Center.