RICHMOND, Va. -- The weight difference that once made it easy to distinguish between twins Maria and Teresa Tapia, the Dominican girls born connected to each other at the chest and abdomen, has disappeared.

Even their mother, Lisandra Sanatis, has trouble telling them apart these days.

"I really have to look at their faces, and Teresa has a mole on her nose, so that's how I can tell them apart," Sanatis said Wednesday during a Halloween party at the Henrico County headquarters of World Pediatric Project.

The Richmond-based philanthropy sends teams of doctors to Caribbean countries on medical missions and brings children with more complex cases to the U.S. for surgery. It arranged for the girls to have separation surgery at Children's Hospital of Richmond at VCU in November 2011.

The twins, now 2½ years old, and their mother returned to Richmond this week, where the girls are getting a medical checkup and visiting with supporters who helped the family during their stay in Richmond.

Unlike last year when the twins wore a bumblebee Halloween costume that was specially made by VCU design students to fit their joined bodies, this year they each had their own princess dress, one pink, one blue, with tiaras and magic wands to complete their outfits.

"As far as health goes, they are doing very well," Sanatis said.

That was confirmed during an afternoon check-up at VCU. Dr. David Lanning, surgeon-in-chief at Children's Hospital of Richmond at VCU, led the separation surgery, which involved more than 40 medical staff members. Transplant surgeon Robert Fisher, pediatric surgeon Claudio Oiticica and plastic surgeon Jennifer Rhodes also had key roles in the surgery, which lasted 18 hours for one twin and 20 hours for the other.

Prior to surgery, the girls' livers were fused, as were their duodenums, the top part of the small intestine. Each had her own heart and kidneys, and each had two arms and two legs. They were healthy, but one of the girls was about 20 percent heavier because the nutrition both girls were taking in went mostly to one of them.

"They have great health, and they love to play," Sanatis said, her Spanish translated by Rocio Watson, a program director at World Pediatric Project.

"They still act very close to each other," Sanatis said. "They are always hugging and kissing on each other.

"Even if one steps out of the room, the other one automatically starts missing her. They now have two separate beds, but some nights one will sneak into the other one."

Lanning, who also saw the girls about two weeks ago when he went on a World Pediatric Project medical mission to the Dominican Republic, said the girls are off all medications.

After the surgery, both had been taking a baby aspirin, and Maria also was taking special supplements because tests showed that her pancreas, the organ that produces insulin and other hormones, was not producing enough of some digestive enzymes.

The girls will have blood work done while they are here to check such things as liver function.

"If you look at the weight, the catch-up is remarkable," Fisher said Wednesday.

The girls, seated next to each other on the examining table, were a study in contrasts as attention was lavished on them. Maria was fussy at first and didn't want to leave her mother's arms. But then she lifted her dress without prompting so the doctors could get a look at the scar across her torso.

Sanatis answered the doctors' questions about the girls' bowel habits, of particular interest since their digestive systems were so intertwined before, and she asked a question about an area on the girls' stomachs that seems unusually hard when the girls have a full belly.

Earlier, Sanatis, who has three other children, said she tries not to think too much about what it was like a year ago for the girls.

"Even though the operation was a success and everything was successful, I really don't want to go back to those times," she said. "Maybe it wasn't real visible, people couldn't tell, I was in pain. I was suffering a lot.

"I don't know if it's because I don't know many things, but I really was suffering and in anguish over my daughters."

While they are in Richmond, the girls and their mother will be special guests at World Pediatric Project and Children's Hospital of Richmond at VCU events. 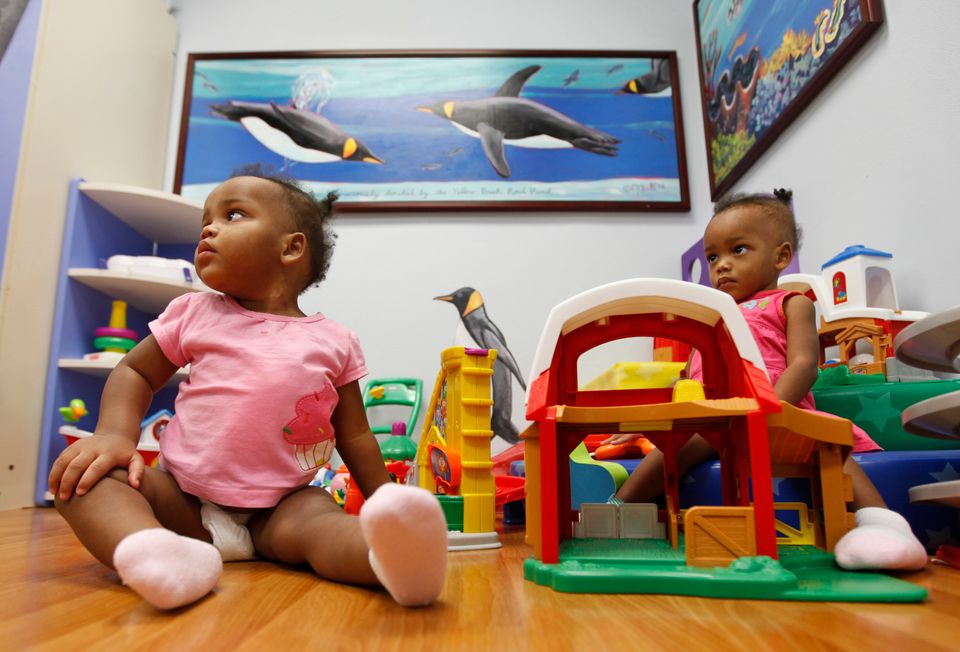 1 / 17
Teresa Tapia and Maria Tapia
Maria Tapia, and Teresa Tapia play in a playroom at Childrens Hospital of Richmond at Virginia Commonwealth University in Richmond, Va., Thursday Dec. 1, 2011. The conjoined twins were separated during an operation at the hospital Nov. 8, 2011. (AP Photo/Steve Helber)
AP